Walter Russell Mead is arguably one of America’s most interesting political thinkers and commentators.  He has a special talent to present the “bigger picture”, and while his political sympathies are clearly left of center, he seems always prepared to engage fairly with views that may differ from his own. A few months ago, he started blogging at The American Interest, a bi-monthly magazine whose current issue happens to include several pieces debating US policy toward Israel.  (BTW, the magazine’s editor, Adam Garfinkle, has written a book on a phenomenon that’s probably quite familiar to CiF Watch regulars: “Jewcentricity” – you can check it out at Google books here)
When it comes to the debate about the relations between the US and Israel, Walter Russell Mead has long staked out a position that leaves lots of room for fair-minded criticism of Israeli policies, but also draws very clear red lines. A few years back, when Mearsheimer and Walt published their book on the “Israel Lobby”, he memorably wrote in a critical review for Foreign Affairs: “This may be a book that anti-Semites will love, but it is not necessarily an anti-Semitic book.”

Mead returned to this subject in one of his recent blog posts, where he argued that “it’s impossible to understand the popularity of ILS or Israel Lobby Syndrome (the belief that the organized, insistent power of American Jews as deployed through organizations like AIPAC is primarily responsible for American support of the Jewish state) without assigning a role to a lingering whiff of anti-Semitism in the American air.”

Unsurprisingly, this post generated quite a bit of controversy – or, as Mead put it so delicately when he recently commented on the reactions: it “was not universally popular”. Mead announced his intention to examine “the reasons why the United States supports Israel as much as we do”, and he has since written several additional posts on this subject.
However, he emphasized that there was “one difficult subject that needs to be addressed up front, and that issue is anti-Semitism.” While some of Mead’s subsequent observations refer to an American context, his identification of antisemitic themes and sentiments in debates about Israel could easily be drawn from what is published day in and day out on CiF, both above and below the line.
Mead starts out by noting that antisemitism has deep roots in western Christian history and that it is entirely unrealistic to claim that it has disappeared entirely or that it lives on only “in weirdo subcultures.” Therefore, Mead argues, it is rather suspicious “when people who loudly and implausibly assert that anti-Semitism isn’t a problem anymore make harsh and unbalanced criticisms about the world’s only Jewish state.”
He then makes a point that is all too true – but it definitely takes courage to make it in our “politically correct” times:

“if we compare the attention and care that the international community has extended to the Palestinians with our attention and support for other victims in other places, a disturbing pattern emerges. Whatever the wrongs of Israel’s occupation policy […] the Palestinians, especially in the West Bank but even in Gaza, live much better than many people in the world whose suffering attracts far less world attention — and whose oppressors get far less criticism. I would much rather be a Palestinian, even in Gaza, than a member of a minority tribe in the hills of Myanmar, or almost anyone in the Eastern Congo or Darfur. Millions of children in Pakistan and Indonesia have less food security, less educational opportunity and less access to health services than Palestinians who benefit from UN services […] that poor people in other countries can only dream of.”

Interested in a quick CiF-reality check? Here we go: Simon Tisdall’s “Bibi’s snub to Biden may backfire” on March 10th got 248 comments, a day earlier his piece on the Islamist threat in Somalia garnered 35 comments, and his piece on the machinations of the Burmese junta on March 11 managed to scrape 40 comments… 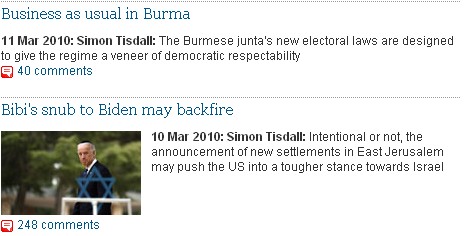 “The disproportionate reactions to Israel’s treatment of Palestinians constitutes a genuine scandal and pretty much proves that anti-Semitism did not die when Hitler shot himself underneath Berlin. Russia treats its Chechens much worse than Israel treats its Arabs yet there are plenty of self righteous German leftists who want to disinvest from Israel but favor closer relations with Putin’s Russia. These people will hotly deny that they are anti-Semites and get all huffy and moralistic; I am not sure that the rest of us should take them at their word. The pious people in Turkey who have gotten so angry recently about Israeli actions in Gaza haven’t perhaps thought as deeply as they could have about Turkey’s record with the Armenians, Greeks and the Kurds. Although life is far from perfect for Arabs in Israel, Muslim and Christian Arabs generally have more freedom, dignity and equality in Israel than Christian Arabs, Jews and non-Arab ethnic groups enjoy in many Arab countries.”

While Mead acknowledges that there may be other factors that explain “why people react with disproportionate outrage to Israeli wrongdoings,” he ultimately states in no uncertain terms:

“But even after making all the possible and necessary allowances, there is something disturbing about the widespread excessive fixation on Jewish shortcomings. Almost the whole world is barking obsessively and furiously at the Jews while ignoring equal or worse problems on every side. At worst and far too frequently, this is anti-Semitism in full career: virulent, murderous, irrational, vile. It must be opposed, and it must be called to account.”

One should expect that the views Mead expresses here would be widely shared on the “decent left”;  obviously enough, however, the kind of “left” CiF strives to represent is primarily interested in indulging its “excessive fixation on Jewish shortcomings” while screaming down anyone who shows that this fixation is indeed “far too frequently” a reflection of antisemitic sentiments.

Like Loading...
Tags from the story
Antisemitism, Comment is Free, Guardian, Uncategorized, Walter Mead
Written By
Maimon
More from Maimon
Reza Aslan is a highly successful author, whose first book on the...
Read More