So now we have the latest take on the Midde East impasse in the print version of the Guardian, as well as on CiF, by Chris Patten, one time conservative cabinet minister, and EU commissioner.
Just to remind ourselves who Crass, oops, Chris Patten is :–

This piece, as noted by below the line commenter, TiredOldDog, can be summarised in a short sentence, “To assure world peace, the EU must make Israel surrender”.
Patten talks about the “morally appalling and politically self-defeating policy of Israel” etc etc.
As Patten is someone whose opinions carry weight in the corridors of power, I would draw his attention to the recent sequence of events which have brought us to where we are today. Let me clarify the situation for Chris Patten.
Israel unilaterally and unconditionally withdrew from Gaza in 2005, even disinterring Jewish dead from the cemetery there. All Israel asked for in return is to be left alone. Israel leaves behind infrastructure, such as homes etc, and in particular a lucrative greenhouse industry, paid for by generous US Jewish donors. These were trashed within days of the withdrawal. The withdrawal was greeted not by the Palestinians building up their infrastructure, but by terrorising Israeli civiians by raining down thousands of rockets on them, sent from Gaza. Meanwhile Israel continues to treat injured Gazans for free, evacuating them across the border to Israeli hospitals, including treating terrorists.
In 2007 Hamas takes control of Gaza in a brutal coup against the PA, in what is euphemistically described as a democratic election, in reality by threatening and terrorising those with whom they disagree with violence. Hamas controls all the hundreds of millions of dollars received in aid, as well as impounding many of the aid deliveries. Israel, meanwhile, allows across its border thousands of tons of suppies daily, including supplying Gaza with electricity, fuel etc. Gaza, meanwhile, is blockaded at Rafah on the Egyptian border.
Eventually, after years of escalating rocket and mortar attacks against Israel , ignored by the international community, Israel launches Operation Cast Lead, 2009.
During it, Hamas broke all the laws of warfare, both by targeting civilians and by using Gazans as human shields, as well as fighting often in civilian dress.
Indeed, Colonel Richard Kemp, who was British Commander of troops in Afghanistan in 2003, and senior advisor to British Intelligence said of the IDF —“the Israeli Defence Forces did more to safeguard the rights of civilians in a combat zone than any other army in the history of warfare”.
Compounded with all that, Hamas in common with the PA, and Jordan and Egypt, poisons young childrens’ minds in schools by daily pumping out hate against Jews, and against the Jewish state. Hamas even runs training summer camps in the holidays for young children, training them with guns and dressing them up as suicide bombers. Hamas declares in its Charter that its goal is the elimination of the Jewish state.
So, Mr. Patten, what don’t you understand?
Considering that Europe, far from showing courage in saving European Jewry 70 years ago, colluded in its destruction, you now are asking for it to “show courage” to destroy the only Jewish state.
Why don’t YOU show courage and demand that Hamas follows the norms of civilised behaviour, including allowing the Red Cross access to Gilad Shallit.
But that’s too hard—- much easier to constantly lay the blame at Israel’s door.
For some of the commenters, Patten did not go far enough in his condemnation of Israel, and here we have a sample of the usual hatemongers on CiF:- 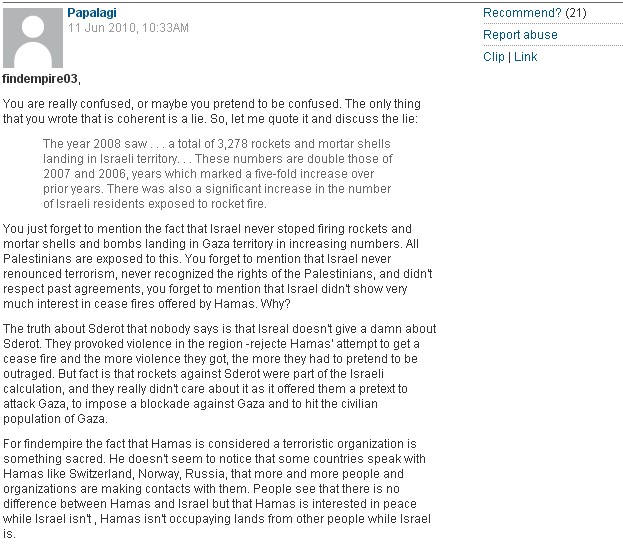 I give the last word in Israel’s defence to Pulcinella:-

Tags from the story
Antisemitism, Chris Patten, Comment is Free, Guardian, Hamas, Uncategorized
Written By
Tosca
More from Tosca
Some people are never happy unless Jews are centre stage, preferably when...
Read More

0 replies on “Antisemitism is a light sleeper”