As was admirably documented by the Reut institute several months ago, anti-Israel activity operates on two fronts. The paramilitary actions of various Palestinian and other anti-Israel factions are complimented by an extensive campaign of delegitimisation, of which the Boycott Divestment Sanctions (BDS) movement is but one branch.

At long last the Israeli government is now starting to grasp the importance of the non-military campaign against Israel and 25 members of the Knesset from seven different parties have come together to try to take action against the promoters of BDS both at home and abroad. However, the thought of Jews defending themselves against attackers from within and without appears to be too much for JNews Director Miri Weingarten, who launched her campaign against the proposed legislation both on her own organisation’s website and on the virtual pages of CiF on June 30th.

Weingarten’s article raises some interesting questions. Firstly, this bill is still at the proposal stage and is therefore not yet law; does the Guardian also see fit to comment on proposed legislations dealing with internal affairs in other democratic states around the world? Secondly, the proposed bill is remarkably similar to long-existing US legislation on the same subject; are we to see criticism of this law on the pages of CiF too?

Given the links (including funding) between JNews and certain members of Jews for Justice for Palestinians, the latter’s heavy involvement in the campaign to boycott Israeli goods and its association with organizations such as BIG and the Palestine Solidarity Campaign which have no qualms whatsoever about describing Israel as an ‘apartheid state’ or dating the ‘occupation’ from 1948, is Miri Weingarten’s partisan commentary fitting for the pages of ‘the world’s leading liberal voice’, or can we take it that the Guardian itself has joined the BDS campaign by providing a platform for those intent upon dismantling the State of Israel?

Of course there is nothing avant-garde about Weingarten’s defence of the BDS movement on the Guardian’s pages; Naomi Klein (apparently something of a heroine to CiF staff member Katherine Viner) and Joanna Blythman have both been there and done that, along with Neve Gordon. Should this proposed legislation become law one wonders if we can expect to see the Guardian’s Jerusalem correspondent suddenly encountering a less than welcoming reception at Ben Gurion airport.

Let us make no mistake; those involved in the BDS campaign, like those who practice lawfare or support NGOs dedicated to the dismantling of Israel, are not the ‘human rights activists’ which Weingarten claims they are. These days, of course, even Jack the Ripper could earn that accolade from much of the so-called ‘liberal press’ were he to jump aboard a ship to Gaza or stand with a placard outside the Ahava store in London, but the real agenda of the BDS movement is to negate the basic human right of self-determination of Jewish Israelis and it seems that along the way they also have little or no concern for the Palestinian workers harmed by their actions.

“About 200 workers are employed in the Achva factory, of whom about 100 are Palestinian workers. “There are no politics in our factory,” the CEO declares, “our Palestinian workers are the richest people in their villages, because they earn NIS 6,000-7,000 per month here. From talking to them, [I know that] they are afraid of what will happen, it means a loss of livelihood for them.”

In light of the blatant hypocrisy exhibited by some leaders of the BDS movement such as Omar Barghouti and the obvious propagation of falsehoods about Israel by BDS campaigners, one cannot but wonder how so many so-called progressive liberals have allowed themselves to have the wool pulled over their eyes by a movement which was born out of the racist hate fest which was Durban I. Peace and co-operation in the Middle East will only come about when people are brought together by exactly such things as trade and commerce; not kept apart by artificially engineered divisions. But of course the well-being of the Israelis and Palestinians on the ground is not what interests the members of the BDS movement. Their agenda has far more in common with ideologies from the past than ideals for the future. 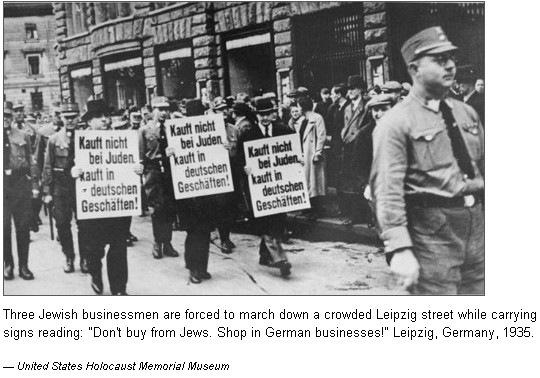 Does the Guardian’s management really approve of giving a platform to a movement which singles out the Jewish state for sanctions just as Jewish businesses were targeted within living memory? Whilst there may be differences of degree between calls to boycott Israeli goods in British supermarkets and a government-initiated boycott of all Jewish concerns, these are indeed differences of degree, not of essence. The delegitimisation of the Jewish people and the delegitimisation of the Jewish State both originate in the same dark place.

0 replies on “Battling the Boycotts”