(This email exchange between a concerned reader and the editors at The Guardian serve as an interesting follow-up to the recent post by AKUS, on the quite revealing use of photos by The Guardian to illustrate their story about British Jews’ attitudes towards Israel, by Antony Lerman.)

Mr Medhi Hasan in his recent article on Comment is Free mentioned his discomfort with this:

Who needs “news”, eh? Take today’s Express front page. “One in five Britons will be ethnics,” screams the headline. (On the Express website, by the way, Macer Hall’s “story” is accompanied by a picture of – yep, you guessed it – two women in burqas. So now we’ve been warned what those dastardly ethnics will look like too. Thank God!)

Today, the Guardian published this story, which contained this heading and subheading:

The article is accompanied by a picture of 5 (possibly 6) Hasids who look as though they are lamenting the loss of the keys to the building behind them. The photo is helpfully captioned: “Ultra-Orthodox Jewish men in Jaffa, south of Tel Aviv. The survey found British Jews have a strong affinity for Israel, with 90% having been there. Photograph: Jack Guez/AFP/Getty Images”

Now, I understand that whilst the Express is deliberately whipping up ‘fear of the other’ and is to be derided and condemned, the Guardian is merely using a generic, stock photo of Hasids in Jaffa to illustrate a rather heartening story about Jews in the UK.  One picture is worth a thousand words and all that – for a story that didn’t need a picture when you think about it.

I’d be grateful for your thoughts on the matter.

I note that you have changed the illustration to the story ‘British Jews favour ‘two-state solution’ in Israel’ from that of 5/6 perplexed orthodox Jews in Jaffa to 1 orthodox Jew walking through a London market. 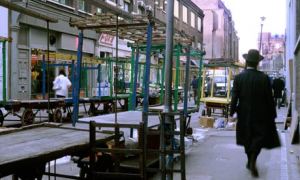 Yes, the picture was changed by the chief subeditor soon after the article was launched yesterday – before your email arrived, so I didn’t see the original picture.

You asked in your first email why the article could not have been launched without a picture. We always do attach a photograph to articles before launching them on the website (except in very rare circumstances). We do this because the words in the caption, along with those in the headline and standfirst, direct people who are using search terms to find articles on the internet to our website. Not optimising web articles for search terms, is rather like not getting printed papers into the newsagents.

I don’t think it would have been an easy job to find a picture to illustrate this article and I don’t think the one on it now is inappropriate. However, the issues you raise are ones subeditors should be constantly keeping in mind and I’ll pass your comments on.

Many thanks for your swift response.

Thanks for the explanation regarding usage of pictures – it makes sense.  I am sorry you didn’t get to see the original picture as it was ridiculous – meaning that the picture itself invited ridicule of the men who had been photographed.  I hope you do eventually look at the picture and decide whether it is appropriate to keep it in your stock to ever illustrate ‘Jews’, ‘Israelis’ or even ‘Orthodox Jews’.

It is worth thinking how you would illustrate a story about Christians in the UK (Plymouth Brethren, a Church, a Catholic nun, the Pope?), Muslims in the UK (women in burqas, a mosque, an Iman?), Jews in the UK (orthodox Jews, a synagogue, a rabbi?).

Most Christians, Muslims, Jews etc in the UK look like you and me ie. no ‘signifiers’. Semiotics helps us to not to take representations for granted as ‘reflections of reality’, enabling us to take them apart and consider whose realities they represent.

In other words, while the first picture was inaccurate, inappropriate as well as offensive as it offered Jews as objects of ridicule, the second picture represents a ‘reality’ of British Jews as ‘alien’, and ‘exotic’.  I trust that you will also pass this email on to the sub-editors.

Elder of Ziyon had an interesting and relevant post recently about the use of photos of chassidic Jews in stories about Israel.

Like Loading...
Tags from the story
Guardian, Uncategorized
Written By
Adam Levick
More from Adam Levick
As we’ve noted in previous posts, the Temple Mount in Jerusalem (where...
Read More