(This is the first installment in a series of quotes, facts, and figures that could provide relevant context to the Israeli-Palestinian Conflict, yet will never find its way to the pages of Comment is Free – as ideologues rarely have time for stubborn facts which may contradict their preconceived opinions.)

Many CiF contributors will find almost any excuse to frame Israel, and Israeli policy towards Palestinians or Israeli Arabs, as racist.  Rarely, if at all, is it acknowledged, in such myopic reports, that Israel, whatever its flaws, is a democratic state which, by even my the most rudimentary standards, treats its religious and ethnic minorities far better than any other state in the region. Moreover, rarely do such CiF writers find the time to cite the innumerable documented examples of political and religious statements from leaders in Arab and Palestinian society which express explicit (and, often, quite chilling) anti-Semitism – extremist rhetoric which self-styled “progressives” at CiF should be utterly appalled by.  So, since they won’t report on such bigotry, we will:

A 28 February screed by Hamas’s deputy minister of religious endowments, Abdallah Jarbu, aired on Al-Aksa TV. His speech included this, courtesy of MEMRI:

“[The Jews] want to present themselves to the world as if they have rights, but, in fact, they are foreign bacteria – a microbe unparalleled in the world.

It’s not me who says this. The Koran itself says that they have no parallel: “You shall find the strongest men in enmity to the believers to be the Jews.” May He annihilate this filthy people who have neither religion nor conscience.I condemn whoever believes in normalizing relations with them, whoever supports sitting down with them, and whoever believes that they are human beings. They are not human beings. They are not people. They have no religion, no conscience, and no moral values.” 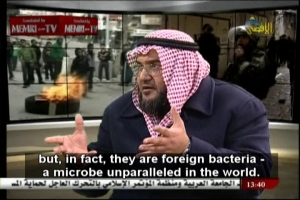 As CAMERA’s Andrea Levin pointed out – referring to stories by the New York Times, but just as relevant in the context of reports by The Guardian: “Can…reporter[s] who falsely impute bigoted sentiment[s] to the Israeli population, while ignoring ferocious prejudice on the part of the Arabs, be trusted on any subject related to the Jewish state?”

Like Loading...
Tags from the story
Antisemitism, Comment is Free, Guardian, Uncategorized
Written By
Adam Levick
More from Adam Levick
A major H/T to OyVaGoy, who relaunched his blog today. The following interview...
Read More