Israeli NGOs horrified by the developing humanitarian crisis in Ireland have organized a flotilla called Viva Dublina. A spokesman for Viva Dublina said:  “We are horrified by the developing humanitarian crisis in Ireland!”  Viva Dublina has been loaned one of the world’s largest luxury cruise liners by an Israeli shipping mogul to act as a flotilla from Ashdod to Dublin.  The mogul wrote a letter to Ha’aretz saying: “I am horrified by the developing humanitarian crisis in Ireland!” The ship will be used to return the useless junk and out of date medications sent on flotillas manned by anti-Israeli Irish activists that are currently clogging the warehouses in Ashdod after Hamas refused to accept the “donations”. Egypt has asked if the flotilla can stop in El Arish to take similar “donations” that are clogging the warehouses there. Egypt says it prefers to use its warehouses to store kassam rocket parts and Mercedes-Benz sedans for Hamas.

Approximately 800 foreign correspondents currently based in the King David Hotel in Jerusalem who are horrified by the developing humanitarian crisis in Ireland will be offered accommodation on board at special rates, tips included, for the cruise. The ship will be renamed “Danny Boy” for the trip. A 10 year-old Druze girl from Daliyat el-Carmel has said she hacked the ship’s IT system with a virus she calls “Sucksnet” and programmed the ship’s siren to play “When Irish Eyes are Smiling”  in an effort to cheer the Irish up when the ship pulls into Dublin Harbor.

Turkey rejected a request to fly the Turkish flag and declared that the only flotillas it would recognize are those between Libya and the Turkish Republic of Cyprus. Turkey has offered to provide 25 IHH terrorists armed with various weapons to travel on the flotilla if Israel would agree to let them infiltrate Belfast after they arrive. Britain has asked Israel to send the Dubai hit team to Belfast to take care of this problem as international law does not prevent terrorists traveling the high seas to Ireland. Israel agreed provided that Britain provides 30 tennis rackets so the team would be cleverly disguised while wandering around the Grand Belfast Hotel. While inspecting oil-drilling sites on the Falkland Islands Britain’s Prime Minister said: “Ireland has been the world’s largest open air prison camp for centuries, and we intend to keep it that way!”

The flotilla will carry 10,000 balloons, 5,000 coloring books, 3,000 blue and white crayons and a textbook, in Hebrew, titled “Basic Economics – How to Keep your House in Order by not Poking your Nose into other Peoples’ Business” for the Irish Minister of Finance, who is known as the Pfoo-Yuk of the An Roinn Airgeadais. There are also cheerful drawings donated by Israeli children expressing solidarity with the starving children of Ireland. Israeli flags will be flown in ahead of the flotilla’s expected arrival date by El Al for the poor children of Dublin to wave as they line the port waiting for the ship to arrive.

In order to alleviate any possibility of another potato famine, the flotilla intends to carry 2 million boxes of matzoh that have been in storage at Mt. Sinai since the Exodus from Egypt and possibly are no longer Kosher L’Pesach. However, since matzoh have a long shelf life (3,000 years, in fact) it is hoped that this will see the Irish through the crisis. The new mayor of Carrickmacross called the decision by the previous council to tear the page signed by the Israeli ambassador out of the old visitors book “an unfortunate misunderstanding”. The hungry residents dismissed the previous town council and bought a new visitors book when they heard about the shipment of matzo in the hope of attracting matzoh-bearing Israelis to their town. 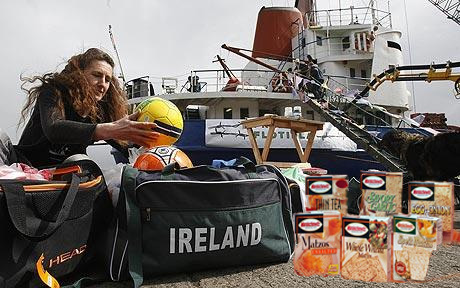 Premier Shimon Peres, Nobel Peace Prize winner, will accompany the flotilla in order to draw attention to the plight of the Irish. He has been invited to sign the visitor book at Carrickmacross provided he brings a box of matzoh with him.  Peres hopes to meet with the Irish Nobel Peace Prize winner Mairead Corrigan, who won her prize for not actually making peace in Northern Ireland. Peres said: “I will share some ideas about making peace with the goyim that I heard from my Bubbe back in the old country”. Mairead Corrigan recently had a brief all-expenses paid trip to Israel, which she enjoyed so much she attempted to remain even when politely shown the door after it was explained that Israel only accepts refugees from the Sudan.

Israel’s ambassador to the UN, noting that there are reports of Irish refugees fleeing to places as far afield as Edmonton, Canada, will propose that UNRWA’s $1 billion per annum budget be directed to Ireland to help the 4.4 million Irish refugees in Ireland and their descendents to live at the level to which the people of Gaza have become accustomed. An entrepreneur from Gaza was recently seen scouting locations in Dublin for the first Roots restaurant combined with an Islamic cultural center, school and mall filled with Israeli products to be opened outside of Gaza City. He is appealing to the US government for a Federal Grant or USAID money to fund the cultural center. The Saudis have generously offered to fly their surplus textbooks from Mecca to Ashdod to load onto the flotilla for use at the new school.

George Galloway, Lauren Booth, Ken Loach and Tony Greenstein have written a letter to the Guardian condemning the Viva Dublina flotilla in the harshest terms. It is, they wrote, nothing more than a blatant publicity stunt that will do nothing to alleviate the suffering of the Irish. The Viva Dublina organizers have shamelessly countered by saying they absolutely agree with them, but what do they think the purpose of a flotilla is if not a blatant publicity stunt? At this time they have not received a response from the signatories to the letter.