Muslim.net, owned and operated by Aljazeera Publishing, published a series of posts about the fire raging through Northern Israel which can only be described as a celebration of the death, carnage, and misery caused by the blaze.  Though the post is in Arabic, Google Translate, along with the grotesque imagery, provides sufficient context to conclude that the prose and accompanying photos indeed represent a celebration of the death of Jews.

CiF Watch is posting this to highlight a fact that is painfully obvious to many – but is frequently ignored by those (like the Guardian) who are not capable of assimilating information which doesn’t conform to preconceived notions of immutable Arab victimhood and Israeli culpability: that the problem of Jew hatred in the Muslim/Arab world is simply unparalleled (in depth and scope) in the modern world. (Indeed, Muslim.net is far from the only Arab media outlet celebrating the death and destruction caused by the Carmel fire.)

One only need to occasionally visit the sites Palestinian Media Watch and MEMRI to understand that, unlike in the West (where often even mild expressions of bigotry are socially unacceptable), anti-Semitism in much of the Arab/Muslim has no risk of public opprobrium and, indeed, is quite normative behavior.

After much discussion we decided not to publish the grotesque images nor link to the specific page on the Muslim.net website which contains the photos out of respect for the families of the victims.

However here is a photo, of an injured victim of the fire, published on the Muslim.net site but which was originally published by Reuters. 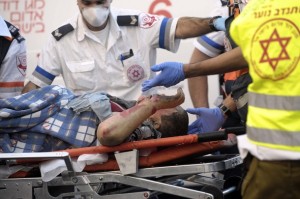 Here’s the accompanying text at Muslim.net (again, from Google Translate):

What follows, however, is the text which accompanied the horribly graphic photos we’re not showing of (what are presumably) the charred dead bodies from the Carmel fire.  (You’re free to search the site yourself if you doubt the authenticity of our report).