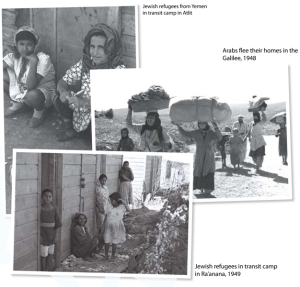 Rachel Shabi must be one worried woman. She is troubled because the Israeli government, led by deputy foreign minister Danny Ayalon, has lately been putting the issue of Jews driven out of Arab countries on the peace talks agenda.

Turning up the volume on Jewish refugees has shaken avowed anti-Zionists like Ms Shabi out of their comfort zone: a second set of refugees, they fear,  has popped up to challenge the Palestinians’ hitherto exclusive monopoly on victimhood.  Except that these Jewish refugees have not suddenly popped up. They and their descendants comprise 50 percent of Israel’s Jewish population. They have been in the background all along, these silent, reproachful reminders of a great and unacknowledged historical injustice. Just because the Arab world has chosen to deny or falsify their narrative,  the media have chosen to ignore them, and successive Israeli governments have made the monumental mistake of not making a public issue of them – does not mean that these Jews do not deserve recognition and redress.

Even as Saeb Erekat insists that there will be no peace without justice for Palestinian refugees, so can there be no meaningful peace without recognition for the 800,000 Jews driven out of Arab countries. In fact, addressing the suffering of both sets of refugees is more likely to lead to a lasting peace.

In truth, Jewish refugees, even if not explicitly stated as such, have been on the international agenda from the word go. UN GA 194, UN SC Resolution 242, international and bilateral agreements all address a just settlement of the ‘refugee problem,’ without specifying whether the refugees are Jewish or Arab.

It is almost as hurtful as Holocaust denial to deny that these Jews were refugees. To be sure, not one of them would say they were still refugees today – unlike the Palestinians. None still live in the maabarot tent camps of the 1950s. Only a minority came as Zionist idealists. The vast majority were driven out either by state-sanctioned brutality, discrimination and expulsion in Iraq, Syria, Libya or Egypt  –  or they were ushered towards the exit by violence, marginalisation and intimidation as in Algeria (eg Ayalon’s own family), Morocco and Tunisia. Absorbing these refugees was the right thing for Israel to do. It is the Palestinian condition of non-absorption that is abnormal and counter-intuitive to basic humanitarian values. It is the Palestinians penned in camps who are hostages to political point-scoring.

It would seem logical  that Israel should represent the interests of Jewish refugees, simply because 75 percent of Jews from Arab countries were resettled there. The argument that Israel would somehow ‘exploit’ the refugees and pocket any compensation intended for them, no longer holds water: the current thinking, expounded by former president Bill Clinton in 2000, is that individual Jewish and Arab refugees would receive compensation from an international fund.

How gracious of Rachel Shabi to acknowledge that some Jews might be entitled to compensation for their ‘impounded property and possessions’.  How then does Ms Shabi explain away the fact that not a single Jew from an Arab country now living in Israel has been awarded compensation for lost property? So deeply mired are Arab states in denial that they won’t admit that these Jews are entitled to demand such compensation. Even the new ‘democratic’ Iraqi government will not deal with pre- 1968 claims (the great Jewish exodus took place in 1950 – 51). In spite of a clause in the 1979 Israeli-Egyptian peace treaty, the Egyptian government has not paid out a single dinar to Egyptian-born Israeli claimants.

As for Ms Shabi’s idea of setting up heritage centres to commemorate Jewish life in Arab lands, it is hard to take her suggestion seriously when such Jewish heritage as has not crumbled to dust is being appropriated as the Arab states’ own. Witness the Jewish communal archives and treasures considered to be Egypt’s national heritage;  the Jewish archives stolen and seized by the secret police in Iraq and now claimed as Iraq’s heritage;  the Jewish shrine of Ezekiel in Iraq, in danger of being turned into a mosque – and the list goes on.

True, Egypt recently spent much treasure restoring the Maimonides synagogue in Cairo to its former glory – but what use is a synagogue when Jews are not permitted to pray in it?

It’s all very well extolling the ‘long vibrant Jewish experience in Arab lands’. On the other hand, to whitewash the antisemitism that resulted in all but 0.5 percent of the Jewish population in Arab countries being ethnically cleansed is akin to celebrating the rich Jewish contribution to German culture without mentioning the Nazi Holocaust.

Shabi-esque apologetics for Arab and Muslim antisemitism won’t wash. All the facts need to be on the table. Both sides need to feel each other’s pain if there is ever going to be hope of reconciliation between Arabs and Jews.