Imagine you’re a comedian, and you want to tell a political joke.  But, as politics is such a sensitive topic, you want to take care not to alienate your fans.  What do you do? Well, you’ll likely decide to use, as the object of your mockery, a safe target – someone beyond the pale, like a totalitarian dictator or egotistical tyrant. Kim Jong-il,  Omar al-Bashir, and Mahmoud Ahmadinejad come to mind.

The Guardian’s Culture Guide, on Dec. 18, which contained celebrity end-of-year lists, included this one, on “Reasons to be cheerful” by British comedian Mark Steel, who wrote his as a poem.  The last zinger included this gem:

A single malt’s aroma,
An ‘Mmm donuts’ from Homer,
Ariel Sharon still in a coma 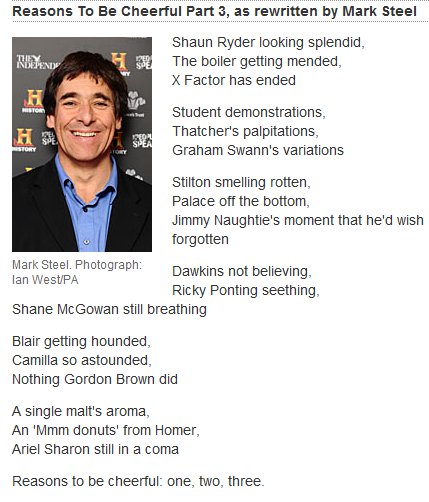 It’s quite interesting that, of all the despots, dictators, and madmen he could have employed in the service of his humorous observations, he chose to mock the comatose former Israeli Prime Minister, Ariel Sharon.

The joke is more than tasteless.  It speaks volumes about the prejudices of Guardian readers – about which, Mark Steel was clearly very much aware.

My thanks to a reader who linked to an article Steel wrote on his website, in which he referred to Israel as, “a nation which acts with such contempt for humanity.”  Steele’s humor at Ariel Sharon’s expense was clearly not a fluke.

Like Loading...
Tags from the story
Ariel Sharon, Guardian, Mark Steel, Uncategorized
Written By
Adam Levick
More from Adam Levick
I was working on a reply to the latest outrageous Guardian editorial...
Read More