When a tagged vulture from Tel Aviv University (code-named R65) strayed into rural Saudi Arabian territory at some point last week, residents told Saudi Arabia’s media that it seemed to be linked to a “Zionist plot” and alerted security services. The bird has since been placed under arrest. (Yes, really.)

The accusations went viral, according to Ha’aretz, with hundreds of posts on Arabic-language websites and forums claiming that the “Zionists” had trained the birds for espionage.

At first, I must admit, I was skeptical of the accusation.  But, coming on top of the Zionist shark attack that killed and maimed tourists on Egypt’s Red Sea, the notion that R65 is indeed an Israeli spy seems quite credible.

As such, I’d like to make a personal plea, on behalf of CiF Watch, to the Saudi government, on humanitarian grounds, to please free Mossad Agent R65, now. 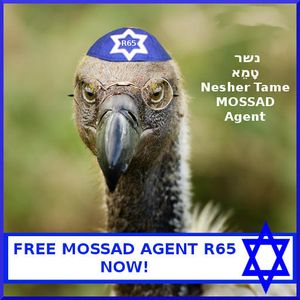