Apparently, the Guardian’s Mya Guarnieri has a sense of humor.

No, I’m not referring to the tone and tenor of her recent comments both at our blog and, more recently, at Huffington Post Monitor – which are generously sprinkled with happy faces like this ” 😉 ” to prove her cheer and goodwill.

I’m talking about her Huffington Post Monitor comments where she bragged of her Israeli residence – shaming those foreigners at the pro-Israel media watchdog blog who dare defend Israel all the way in New York City – while simultaneously making it quite clear that she is proudly anti-Zionist.   (At least we now know what Guarnieri does with her time when not feverishly trying to save Judaism’s soul.) 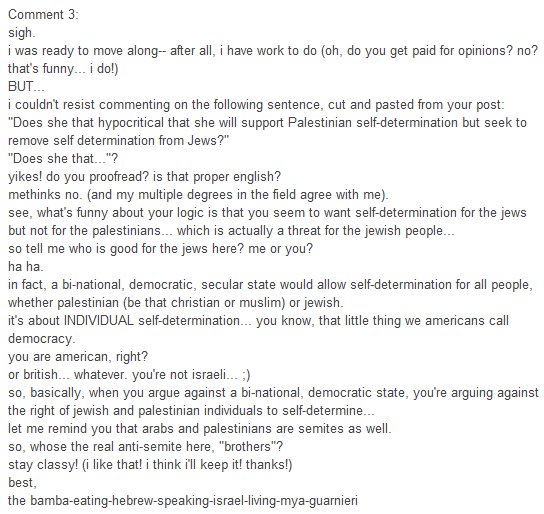 She may demonize Israel in her Guardian pieces – and make wild accusations about its imminent descent into fascism – but at least she is doing it while conversing to her friends in Hebrew, and eating Bamba!

And, yes, FAR better to delegitimize Zionism – and advocate for the radical reconstitution of the world’s only Jewish state into the 51st majority Muslim state, with Jews living as the minority (what possibly could go wrong?) – while in a cafe in Tel Aviv, than to defend the Jewish states’s right to exist from all the way across the Atlantic.

Like I said, she clearly has a sense of humor.

0 replies on “The Guardian’s Mya Guarnieri shows her Israeli pride! (While passionately advocating for the end of the Jewish state)”