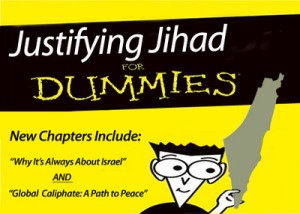 In keeping with its well-earned reputation as the platform of choice for devotees the Muslim Brotherhood and its offshoots, CiF published an article by the Director General of Al Jazeera Wadah Khanfar on Feb. 7th.

The editorial decision to co-operate with Al Jazeera self-promotion is hardly surprising. After all, barely two weeks have passed since we discovered that the two media concerns collaborated on the release of the leaked ‘Palestine papers’, suggesting that they share at least some common interests.

Neither does the editorial decision to allocate column space to supporters of extremist Islamist organisations necessitate the breaking of new ground at the Guardian; that is a very well trodden path  for them, with Hamas officials, members and supporters being allocated regular slots on CiF.

I don’t know how many readers have actually had the dubious pleasure of watching Al Jazeera in Arabic, which is, of course, what is aired to millions here in the Middle East and which I have the impression that some Westerners believe to be identical to Al Jazeera in English.  It is, to put it mildly, not my station of choice but occasionally – such as during its ‘Palestine Papers’ week – it is interesting to observe the style and pernicious tone of its broadcasting.

My first intensive exposure to Al Jazeera was during the 2006 Lebanon war when my family and I took in two families of Druze friends who had been forced to leave their homes near Haifa because of the bombing. Both families of course speak fluent Hebrew, but were also interested to see how the conflict was being reported in the Arab media and seeing as there was little else to do except watch television during the many hours we spent holed up in our reinforced concrete safe room, that meant that I got to see rather more of Al Jazeera reporting than I would have liked.  The running translation from my friends would inevitably come to an abrupt halt at some point as they became more engrossed in expressing their anger and indignation at the content of the Al Jazeera reports.

Wadah Khanfar’s feeble attempts to paint Al Jazeera as an agent of democratic change in the Middle East will no doubt fall on fertile ground at CiF where both the staff and much of the readership remain either blissfully – if not wilfully – ignorant of the organisation’s real orientations and aims or actually support them.

They will not be interested in Khanfar’s personal history of connections to the Muslim Brotherhood or the well-documented shift of Al Jazeera towards the Islamist stance since his appointment which has resulted in a number of former employees leaving the station.

He confirmed to a forum questioner that Al Jazeera was undergoing internal turmoil, notably with the recent resignation of five female anchors the media had reported were harassed by former deputy editor in chief Ayman Jaballah.

Lebanon’s daily Assafir said Jaballah, who is Egyptian, was close to the banned Moslem Brotherhood organization.

Jaballah had apparently complained about the women for not dressing modestly (read veiled).

“It’s much deeper than veils and dress codes: the administration has taken a very unhealthy religious turn that threatens further resignations and has affected morale among staffers who see it as curbing their freedom of thought and speech,” said an Al Jazeera insider on condition of anonymity.”

Al Jazeera enablers at the Guardian will also not raise so much as an eyebrow at the fact that the spiritual leader of the Muslim Brotherhood, Sheikh Yusuf al Qaradawi, has a regular slot on the channel which he uses to spread his extremist views to millions or that Azmi Bishara – wanted for questioning on charges of treason in Israel – is a regular guest on its talk shows. They will also conveniently ignore the fact that Al Jazeera organised a party for the convicted terrorist and child-murderer Samir Kuntar.

Neither will they pay any attention to the fact that analysts identified Al Jazeera as a threat to regional stability long before the recent events in Tunisia and Egypt precisely because of the fact that it is not an independent media concern, but the mouthpiece for an increasingly radicalised autocratic dictatorship which has aligned itself with Iran, Syria, Hizbollah and Hamas, which it also funds.

Certainly after the ‘Palestine papers’ affair, Al Jazeera cannot be said to be a neutral bystander content with only reporting the news. It has proven beyond all doubt that it seeks to influence events on the ground.

“Now, after al-Jazeera has brainwashed Arab minds with charges of PLO treason, no declaration of statehood can be expected. Neither will there be a resumption of negotiations with Israel since the Palestinian team will stick to the most hard-line positions possible.”

And of course nobody at the Guardian appears to be willing to ask Wadah Khanfar why his ‘pioneering’ and ‘intrepid’ outfit refrains from all criticism of the Emir of Qatar and his undemocratic regime, why it stays silent on the subject of human rights abuses in Tehran, Damascus and Gaza or why it facilitates the broadcast of the racist, homophobic and sexist views of Qaradawi.

The British Prime Minister, David Cameron, gave a very interesting speech a few days ago in which he declared his intention to address the thorny issue of the radicalisation of young Muslims in the United Kingdom. In it he stated that:

“As evidence emerges about the backgrounds of those convicted of terrorist offences, it is clear that many of them were initially influenced by what some have called ‘non-violent extremists’, and they then took those radical beliefs to the next level by embracing violence.  And I say this is an indictment of our approach to these issues in the past.  And if we are to defeat this threat, I believe it is time to turn the page on the failed policies of the past.  So first, instead of ignoring this extremist ideology, we – as governments and as societies – have got to confront it, in all its forms.”

I certainly wish Mr. Cameron every success with this new and much-needed initiative, and hope very much that he realizes that ‘all its forms’ does not just include organizations such as certain mosques, radical political groups or student societies.

Today it has come to include some of the mainstream media operating in Britain which is promoting extremist voices to a much wider audience than those other groups could ever dream of reaching  and is sanitizing violent proscribed terrorist organizations, their actions and their supporters in the minds of the British public.

The Guardian’s Board of Directors has apparently been unwilling to address this hardly novel aspect of the paper’s editorial policy. Let us hope that Mr. Cameron will prove more resolute.