Life is getting dull for the Guardian’s woman in Jerusalem. After fleeing the momentous events in Egypt – perhaps wisely, considering the reprehensible sexual assault of Lara Logan – the utterly ridiculous ChickenLady Harriet Sherwood has been limited to such earthshaking articles as:

Providing a tear-jerker about the length of the walkway between Israel and Gaza at the Erez Crossing: 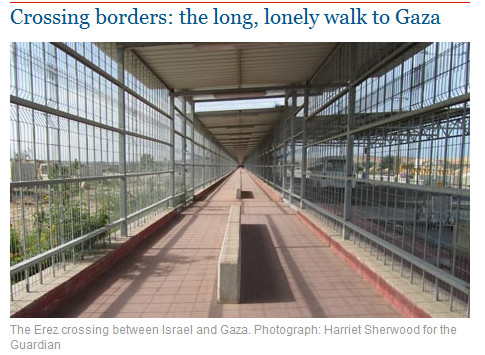 A Ghoul being prevented from cutting hair in Gaza:

Transcribing a report from the Hebrew papers about a phone call between Bibi and Merkel:

And now, reporting that the news from “Palestine” is that there was no news when Thousands join ‘Day of Rage’ across the Middle East. Everywhere else a jolly good time was had by all, but Harriet reports that nothing happened in the non-existent country of “Palestine”:

How disappointing … when everyone else was out killing and being killed (23 in Iraq) on a day of rage, the Palestinians stayed home because of repression … by whom? Surely these “analysts” cannot be referring to the Palestinian’s elected officials???

By the way – why is Harriet transcribing Hebrew papers and offering up such non-news? Perhaps, following the lead of Yuli Edelstein (Israeli minister summons Guardian’s Harriet Sherwood to protest publication of pro-terrorism letter) and the example set in the past by Danny Seaman, Israeli officials no longer invite the Guardian’s representatives to briefing that are open to others?

One can only hope that Israel’s people in charge of PR and communications are awakening from their torpor and internal bickering to realize the damage the constant stream of anti-Israeli articles in the Guardian has done to Israel, and are no longer willing to provide them with the raw material for their attacks on Israel’s legitimacy.

Things are moving in Washington, where it counts, as well – The Jewish Community Relations Council has organized a day on February 27th called the “Israel Advocacy Training Institute: Shaping the Debate” trying to bring together members of the local communities with various media and PR types, even, remarkably, a representative from the Israeli Embassy, Jonathan Peled (extraordinary – they seem to have noticed that there is a large Jewish community in the Washington area at last!).

Their three-day plenary session in March will feature topics such as: “The Changing Landscape of the Middle East – What is President Obama Thinking” with Ambassador Michael Oren who does seem to be one of the few Israelis (American Israeli, of course) aware that there are Jews who do not support J Street.

The topic will also feature Valerie Jarrett, a “Senior Advisor to President Obama” who seems to have no Middle East credentials. That, of course, perfectly equips her for a role in an administration that has made every conceivable blunder possible in the Middle East. Furthermore, the topic “Engaging the Next Generation” seems to have no connection to the Internet or Social media thus indicating how far hidebound US Jewish organization have to go in recognizing the role of blogs like this one can play to bring on board the “next generation” in attacking those who would delegitimize Israel and advancing Israel’s cause.