In honour of the admirable way in which the small Wiltshire market town of Wooton-Basset has received Britain’s war dead her Majesty the Queen is to bestow Royal status on this much deserving community.

Since 2007 the people of this town have with great dignity and respect been lining their high street to observe the repatriation of Britain’s fallen.  Young men and women who lost their lives defending the security of not only this country but also many other European countries who have made no such similar contribution or sacrifice in the West’s struggle with global terrorism.  And, of course, members of Britain’s armed forces also gave up their lives defending the safety, freedom and democracy of the peoples of Iraq and Afghanistan, formerly under the oppression of Saddam Hussein, formerly under the assault of the Taliban.

But what was the Guardian’s response to this?

No article of congratulation, of that at least perhaps we shouldn’t be surprised.  But instead the Guardian’s website simply featured Steven Bell’s despicable cartoon, mockingly titled ‘The war on language’, the town’s name pathetically changed to ‘Wooton-deathfest’, a cheap jibe to imply the people of this town have enjoyed and relished the sight of seeing men and women in their early twenties paraded through the town’s centre in wooden boxes.  And in the background of all of this is a ridiculous billboard depicting Cameron with a Condom pulled over his head, now seemingly a signature mark of Bell’s childish doodlings. 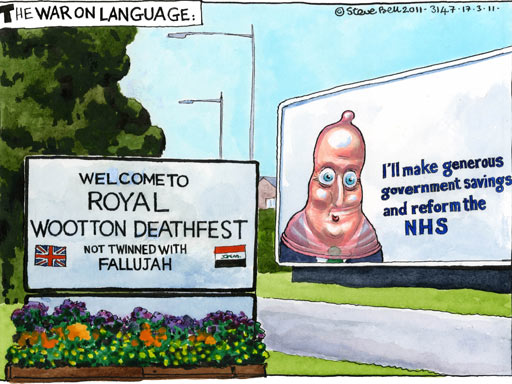 Further, take a few moments to read over the comments on the website where Guardian readers, quite characteristically, have offered up their wholehearted praise for Bell’s shameless drawing.

Few would be naive enough to imagine that there’s any respect left for this country down at the offices of the Guardian, but one might have at least hoped that respect for the dead and regard for human dignity might have carried some weight with these people, but apparently not.

(Tom Wilson is studying for a PhD in Israeli politics at London’s UCL.  As well as being Co-Chair of the UCL Jewish Society, Tom is also a researcher for Beyond Images and is the London representative for the conflict resolution and democracy promotion group StandforPeace.)