Use passive language which may obscure the fact that an intentional act of violence was perpetrated by specific Palestinian terrorists against innocent Israeli civilians:

For instance, the opening passage of Urquhart’s March 23 dispatch from Jerusalem included this:

“A bus has exploded opposite the central station in Jerusalem, killing one woman and injuring at least 25 people, four of them seriously.”

As I noted at the time, the bus just didn’t magically explode. Rather, a terrorist planted a bomb laced with shrapnel in a crowded civilian area, in the hopes of killing and maiming as many Israeli men, women, and children as possible.

However, in making the case I failed to add one additional important caveat to this principle, which is also relevant to photo captions:  Such rhetorical tricks – meant to blur causation – are typically not employed when characterizing Israeli acts.

So, in the Guardian’s (Reuters) report on April 10 regarding the barrage of rockets fired by Palestinian terrorists into Israel over the last several days, “Israel and Hamas call for calm after Gaza violence”, used this photo and caption:

In addition to the fact that the image merely shows the trail of the rocket, from a distance, and not the damage it caused, also note the language:

“A rocket is launched from Gaza”

There’s no indication of a human actor, yet alone mention of those responsible: “Hamas” or “Palestinian terrorists”, nor that such rockets are intentionally aimed at Israeli civilian communities.

However, in Conal Urquhart’s subsequent dispatch in the Guardian, titled “Israel and Hamas step back from major Gaza confrontation”, April 10, there was this: 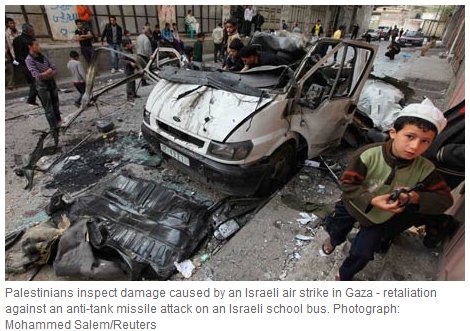 In addition to the up close view of damage in Gaza, which just happens to come across a small Palestinian child, also note the contrast in captions with the previous photo:

The caption of the previous photo noted that a rocket was launched, whereas in this one we are informed that the damaged was caused by an Israeli air strike.  And, while it does note that the Israeli strike was in retaliation against an anti-tank missile attack on an Israeli school bus, there is no mention of who launched the attack, despite the fact that Hamas had already claimed responsibility for the attack.

The contrasting photos and captions serve as another illustration of the faceless, amorphous Israeli conjured consistently by Guardian reporting, which continues to stand in stark contrast with their colorful and often evocative portrayals of Palestinian suffering – a journalistic double standard driven by ideology and, therefore, immune to the cognitive correcting mechanisms of facts or new information.