Children’s hospital wards are often quite noisy places with sick babies crying, attending mothers chatting, toddlers playing and visitors constantly arriving and leaving. So in the early hours of the afternoon of April 6th 1994, I didn’t actually hear the explosion. It was only the third or fourth consecutive wailing ambulance siren which distracted my attention from the I.V. line I was setting up at the time and activated that all-enveloping sixth sense that something, even in a busy hospital like HaEmek in Afula, was very wrong.

Seconds later the ward’s head nurse put her head around the door. She only needed to say one word – pigu’a – which means terror attack in Hebrew. That word activates an entire system. A skeleton staff remains on the wards whilst the rest of us report to pre-determined places and take up our pre-assigned and well-drilled roles. That day was the first time in my professional life that I witnessed the immediate aftermath of what later turned out to be the first car bomb detonated inside pre-1967 Israel.

Seven gas cylinders, five hand-grenades, 1,100 carpentry nails and the fuel in the tank of the car itself combined to rip through the metal and glass of the number 348 bus whilst it stood at the bus-stop in central Afula with passengers boarding, including many teenagers who had just got out of school for the day. Eight people were killed and forty wounded. For months afterwards I used to see some of the wounded teenagers coming almost daily to the hospital for further treatment, mostly for the severe burns they had sustained.

I don’t suppose that Gary Younge bothered to visit the memorial to the residents of Afula killed in that suicide bombing on his way to Nazareth. He probably also didn’t see the memorial to the 17 people killed aboard the number 830 bus at Meggido Junction on June 5th 2002 by another suicide car bomber from Jenin.  Maybe he doesn’t know about the terror attack at the Ta’anachim Junction on May 20th 2000, the murder of two people by terrorists from Jenin near the Afula central bus station on the 27th of November 2001 or the murder of three others at the same bus station on October 4th of the same year.  If by chance Younge stopped off at the shopping mall in Afula on his way to Nazereth, he probably didn’t notice that three Israelis  there and 47 injured- including one of my former colleagues from HaEmek hospital – on May 19th 2003 when a suicide bomber detonated herself as she was stopped by security guards.

Of course I could go on and write thousands more words about the many other terrorist attacks in Afula and the surrounding areas of Gilboa and Wadi ‘Ara which came out of the northern Shomron area and Jenin in particular. I could write about the month of March 2002 when 135 Israelis were murdered; the month that became the watershed after which the Israeli government could no longer refuse the calls of its citizens to construct a security fence in order to prevent the uninhibited crossing of suicide bombers from Palestinian Authority controlled areas.

But Gary Younge would not be interested in my words. He didn’t even know the correct geographical location of his crossing from autonomous Palestinian territory into Israel. For him the security barrier and border crossings are just instruments for his arsenal in his anti-Israel diatribe. Whichever of the numerous crossings Younge used on his trip to Nazareth, he would have had to travel within Israel to get there because there is no crossing directly into the Galilee town of Nazareth. Even the most northerly crossing point at Jalame on the Gilboa is 24.3 kilometres away from Nazareth and to get there one has to pass right through the town of Afula on route 60. 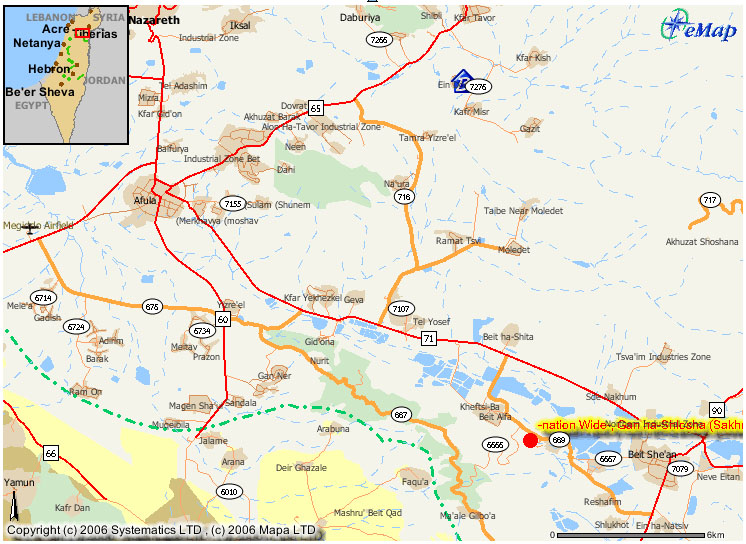 It is therefore interesting that in his original article (before the amendment made due to readers pointing out his faulty geography),  Younge only saw a border crossing and Nazareth.

For him there was – very symbolically – nothing in between; no Israel, no monuments to civilians murdered by suicide bombers, no people, no grief, no fear, no need for protection  from devastation of lives and property. In fact, there is no mention whatsoever of ordinary Israeli people – the ones who get blown to smithereens or have their flesh irreversibly charred by bus bombs. Apart from some oblique impersonal mentions of border guards and security personnel, a politician, a suitably quotable academic and some ghostly “foreigners”, there are no Israeli people in Younge’s world.

That says it all. In writing an article supposedly about the imbalance of responsibility and holding of power, Younge has fallen into the self-laid trap which so often afflicts the British media. He is more than willing to empathise with the Palestinians whom he can identify as suffering human beings, but not only can he not empathise with Israelis – he can’t even see them, either literally or figuratively. For him, we don’t exist.

Let’s examine the rest of this statement by Younge:

“At the West Bank-Israel crossing on the access highway to Nazarath,(sic) only brown-skinned people had their passports held.”

Every day, Israeli security forces receive reams of intelligence information. Some of it is useless, some unfounded – as is the case in intelligence gathering in any country around the world. None of it, however, is ignored because it is the first line of defence in preventing the murder of civilians. By making the above statement, Younge is deliberately accusing Israeli security personnel of racism. Obviously that is the only prism through which his life-experience allows him to view situations, but it does not mean that even if the event was as he reports it, that his subjective interpretation of it is correct.

Obviously I do not know the nature of the intelligence passed to the guards at the border crossed by Gary Younge on that day, and neither does he. But anyone with anything but a pre-determined and seemingly irretrievably biased view of Israel would realise that a bunch of foreigners who had just spent several days in enemy territory, possibly accompanied by or known to have had contact with people known to the security agencies because of their connections to certain paramilitary or political groups should expect to be subject to scrutiny. The colour of their skin is entirely irrelevant. What matters is who they have been in contact with and why.

But Gary Younge’s world is clearly shaped exclusively by what he can and cannot see; he is unable to step out of his particular cultural box and specific life experience long enough to understand that London or Brooklyn-based presumptions, expectations and interpretations are often not relevant in this part of the world. That kind of ideologically and politically inspired tunnel vision is what renders the writings of people such as Younge. and so many more of the Guardian faithful, nothing more than blatantly obvious propaganda.

Like Loading...
Tags from the story
Afula, Anti-Zionism, Antisemitism, Comment is Free, Gary Younge, Guardian, Jenin, Terrorism, Uncategorized, Wadi Ara
Written By
Israelinurse
More from Israelinurse
When I first came to Britain in late 2006, aside from the...
Read More