Since yesterday, when the IDF announced that it has information regarding the intent of some of the flotilla passengers to cause physical harm to Israeli soldiers trying to board their boats, the flotilla organisers, their in-house journalists and their groupies around the world have been frantically giving interviews, writing articles and Tweeting themselves dizzy trying to dismiss the announcement.

One of those is Dror Feiler, who gave an interview to Ynet in his capacity as flotilla organiser. Of course Feiler is far more than just that; he is head of the Swedish branch of ‘Free Gaza’, chair of the Swedish ‘Jews for Israeli-Palestinian Peace’ and chair of ‘European Jews for a Just Peace’ which organised a mini-flotilla of its own last year. Not only did he take part in the May 2010 flotilla, but he was also a guest of honour at the rally organised by the IHH in December 2010 to mark the ‘homecoming of the ‘Mavi Marmara’. Others present included the IHH president Bülent Yildirim, fugitive Hamas commander and member of the Muslim Brotherhood’s ECESG Muhammed Sawalha and the ECESG’s co-ordinator Mazen Kahil (sometimes spelt Kahel).

Here is Feiler making his speech at that rally, in which he compared Israeli leaders to Slobodan Milosevic.

For some reason, Feiler the ‘peace activist’ failed to do anything about the cries of ‘death to Israel’ or the giving out of buttons with the words ‘ Damn Israel’ by the organizers of the rally at which he agreed to speak.  Neither is there any record of his objecting when the IHH president Bulent Yildirim stated in his speech that his organization would struggle against “the filth that is Israel”, called for “release from the burden that Israel puts on the back of the Middle East” or criticized the leaders of the Arab countries who, he said, “if they wanted to, could wipe Zionism off the face of the earth”. 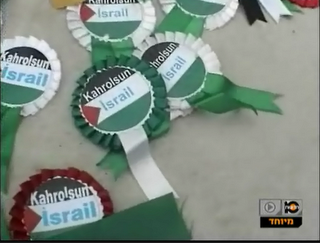 It is, therefore, painfully obvious that Feiler’s definitions of violence and terrorism are not the standard ones adopted by most ordinary people, but that was evident back in 2004 when he set up an ‘art installation’ in Stockholm glorifying the female suicide bomber who murdered 21 people at a restaurant in Haifa.

So obviously we need to have bucket-loads of salt at the ready when Dror Feiler assures us via the Israeli press that:

“The activists are undergoing training for passive resistance. They all signed a non-violence paper and pledged not to kick, hit, curse, throw objects or jump overboard. We know our weapon is a non-violent struggle. If we use actual weapons, we’ll lose.”

We particularly need to take note of the cunning escape clause in his next sentence:

“We won’t respond with violence if there is no violence”

That, of course, is precisely how Feiler and his fellow Hamas-sympathizers tried to explain away the violent attacks on Israeli soldiers on the previous ‘Freedom Flotilla’ jaunt they organized – by making false claims that they were attacked first.

If one needed any further evidence as to Dror Feiler’s warped concepts of truth, he provides it further on in the interview.

“Obviously I care about the Palestinians, but not just them. They house the greatest concentration camp in the world, but I’m also worried about Israeli residents – a wall is being put around them and that also is a form of prison.”

“As long as there are no equal rights for all the residents there will be war and hate and both peoples will suffer. My mother lives in a kibbutz near Tulkarem and there’s a wall in front of her. Is that a way to live?”

Feiler’s mother,, lives on Kibbutz Yad Hanna – the only communist kibbutz in Israel and one which has the reputation of being the most extreme hard Left community in the country.

Dror Feiler’s family moved to Yad Hanna from Tel Aviv in 1967 and he lived there until he left Israel just days before the Yom Kippur war. Yad Hanna is indeed very close to the anti-terrorist fence built as a result of the infiltration of hundreds of terrorists and suicide bombers into Israel during the years of the second Intifada. Whilst Feiler enjoyed Scandinavian tranquility during those years, Israeli citizens begged their government to do something to protect them from the endless waves of suicide bombers. The result was the fence which Feiler has the luxury of never having needed in order to be able to send his children to school in the mornings with peace of mind.

Just nineteen kilometers north of Yad Hanna lies another kibbutz called Metzer which was always at the more doveish end of the political spectrum. Metzer lies inside the ‘green line’ and is very close to several Arab villages with which its residents always enjoyed excellent relations, including a joint football team with one of them. When the people of Metzer discovered that the anti-terrorist fence was set to be built on land belonging to one of the nearby Arab villages, they petitioned the Israeli government with a request to give up some of their own land instead.

On November 10th 2002, Metzer resident and single mother Revital Ohiyun had just put her two sons Matan, aged 5, and Noam, aged 4, to bed when a Palestinian gunman fired two shots at her front door, entered the house and burst into the boys’ bedroom. Revital tried to shield her sons with her body. The terrorist shot all three of them dead and then proceeded to kill two other people

The Al Aksa Martyrs Brigade – a Fatah branch – claimed responsibility for the operation. Hamas praised the murders, calling them “a legitimate resistance operation” and described Metzer as a “settlement that was built on Arab land usurped by the Zionist enemy in 1948”.

That is the same Hamas which Dror Feiler and his fellow flotilla passengers are now aiding and enabling. It is the same Hamas which has operatives and sympathizers within the ranks of the flotilla’s organizers and posing as ‘human rights activists’ on its ships. Its self-stated aim, then and now, is to annihilate Jewish ‘usurpers’ living on so-called ‘Arab land’. If Feiler and his ‘progressive’ friends have their way and manage to breach the naval blockade, that task will become much easier with the aid of unlimited amounts of lethal weapons provided by Iran.

Dror Feiler, his Islamist colleagues and the flotilla’s sympathizers have lied repeatedly about the circumstances surrounding the violent events aboard the Mavi Marmara in the flotilla they organized a year ago. They lie about their connections to Hamas and the Muslim Brotherhood, about the situation in Gaza, the legality of the naval blockade and the purpose of their mission. In fact there is very little they do not lie about, and so there is no particular reason we should believe that they have had a sudden attack of conscience and truthfulness when they tell us that they pledge non-violence this time around.