The Guardian, in a story about Israel that I simply can’t defend, recently noted:

UK’s Foreign Office has warned Britons holidaying in Israel this Fall that eating in public during Yom Kippur, or conspicuously violating the laws of Shabbat in religious neighborhoods, could land a fine, or imprisonment for repeat offenders. The new guidance says “failure to comply” with local customs “could result in arrest” and that “discretion should be exercised” even in the case of children over 13, pregnant women and nursing mothers. Israeli police have said that non-Jews will receive one warning before arrest.

“Do not eat in public during the Jewish fast day (including in your car). This is considered highly disrespectful.”

“The majority of eating and drinking establishments will be closed, but you can find some coffee houses with screens that are intended to allow people to eat during the daytime away from public view.”

Its “British Behaviour Abroad” report, based on consular statistics, found that of the 20 countries in the world with the largest British expatriate populations, Britons were more likely to be arrested in Israel than in any other country covered in the report except Thailand.

This is largely because the Israeli laws and customs are very different to those in the UK. There may be serious penalties for doing something that might not be illegal in the UK,” said the Foreign Office. Last month a British woman living in Jerusalem was fined 350 Shekels – around $100 – for insulting Zionism.

“In addition, we will be reminding ABTA members who sell trips to Israel to signpost their customers to this information. However, whilst we fully understand and appreciate the importance of the Jewish high holy days, we would strongly recommend that the Israeli authorities practise these enforcement measures with a degree of sensitivity and discretion so as to avoid causing unwarranted distress to foreign visitors and the risk of significant damage to their tourist industry.”

Major hotels in Israel are also working to help their guests stay within the law. The Jerusalem Tourism board is issuing a new booklet “to communicate to non-Jewish guests the etiquette surrounding such an important religious time”.

Finally, I neglected a couple of important facts about the Guardian report.  First, the country which the UK Foreign Office issued a warning about was Dubai, and not Israel. Second, the holiday which visitors can be arrested is not Yom Kippur, but the month-long Muslim Holiday of Ramadan. Oh, and of course the Brit mentioned, who was issued the fine, per a previous passage was penalized, not for insulting Zionism, but for insulting Islam on Facebook.

As I was reading that Brits could face arrest, fine and/or imprisonment for violating Muslim religious laws, I was imagining the CiF headlines if such intolerance were suddenly codified in Israel.

New Israeli laws forcing non-Jews to abide by Jewish rituals signifies a growing tide of religious fascism in the country.

New Israeli laws constraining freedom of religious expression,  the latest in a series of outrageously discriminatory and exclusionary laws enacted over the past year.”

We’d also no doubt have a perfunctory photo of a menacing looking Orthodox Jew, or a quite scary looking Israeli leader to illustrate the malevolence of the prohibitions  – such as this photo of Bibi which accompanied in one of Harriet Sherwood’s hysterical warnings over recent anti-BDS legislation (and that simply chilling rule requiring kindergarten students to sing the national anthem once a week). 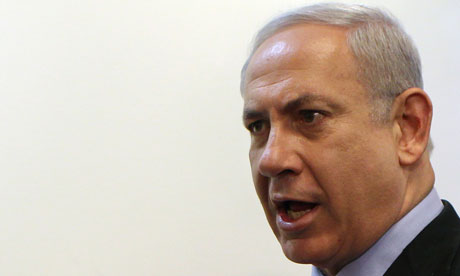 Instead, the 500 word report, (filed under the category of UK News) by Guardian’s religious correspondent, Riazat Butt, reports the story quite matter-of-factly, as if she was reporting on a warning by Dubai authorities to take precautions in light of the emirate’s extreme Summer heat.

Indeed, the Guardian report also includes this professional, quite stunning, photo which could have been provided by the Dubai Tourism Board. 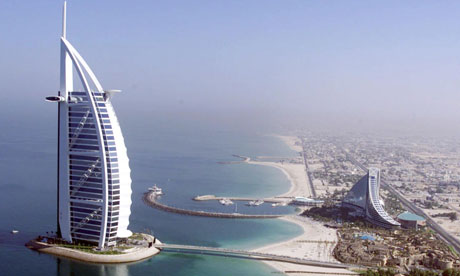 Moreover, is there really any doubt that this will be the last report on Dubai’s culture of intolerance?

No, unlike such stories about Israel, which would likely be reported continually and include straight news stories covering every considerable negative angle of the bill, and CiF commentaries with hyperbolic warnings about Israel’s descent into totalitarianism, Butt’s report likely will represent the last such dispatch on the quite audacious and seemingly illiberal requirement that non-Muslims abide by Muslim laws.

And, whatever gives CiF Watch the nutty idea that the Guardian employs egregious double standards when reporting on the Middle East?

Like Loading...
Tags from the story
Dubai, Guardian, Obsession, The Guardian
Written By
Adam Levick
More from Adam Levick
Yesterday, June 25, in ‘Harriet Sherwood taken for a ride in Acre’,...
Read More