There was a surprisingly frank account of Arab antisemitism by The BBC’s Thomas Dinham last week, titled, “An everyday tale of antisemitism in Cairo“.

While walking in the street someone pushed me from behind with such force that I nearly fell over.

Turning around, I found myself surrounded by five men, one of whom tried to punch me in the face. I stopped the attack by pointing out how shameful it was for a Muslim to assault a guest in his country, especially during Ramadan.

Relieved that a seemingly random assault was over, I was appalled by the apology offered by one of my assailants. “Sorry,” he said contritely, offering his hand, “we thought you were a Jew.”

Shaking his head in disbelief on hearing the news, an Egyptian friend sympathised: “That’s stupid, you are obviously not a Jew.”

So, upon reading the BBC account, a few of us began to wonder how respectable anti-Zionist journalists at the Guardian could prevent violent antisemites in the Middle East from falsely assuming that they are Jews, and came up with the perfect idea – “I’m  not a Jew” Apparel, Inc.

Have you just been appointed Middle East correspondent but worried about being taken for a Jew?

Yearning to feel the Arab Spring breeze but afraid of being beaten to a pulp by a Judeophobic mob?

Longing to sample the delights of the casbah but fearful of being targeted because your nose is, well, generous?

You don’t want such an incident and neither do we.

This is why here at “I’m not a Jew” Apparel Inc., our primary concern is your non-Jewish appearance. 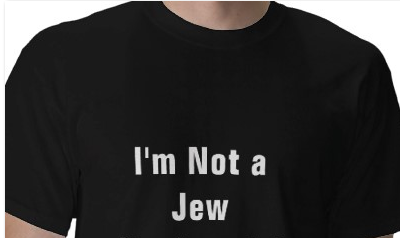 In fact, it seems that we are the first to offer a full line of “I’m not a Jew” apparel designed for journalists and fellow travellers (in a literal sense as well) who wish to indulge their Israel-bashing at close quarters and would like to rejoice with the rioters of the Arab spring but may have risked, until now, becoming innocent victims of Jew-hating rage.

Here at “I’m not Jew” Apparel, Inc. we offer t-shirts with a range of logos from the simple “I’m not a Jew” to “The Jews are our dogs”, “Hitler was right” and “Long live Erdogan”.

You might also like to choose from our range of “I’m not a Jew” accessories, including hoodies (not guaranteed to work during UK riots)  hats, backpacks and coffee mugs – all designed with a radical chic journalist in mind. For the really discerning traveller we also offer an assortment of Nazi nostalgia apparel including stylish Gestapo caps and SS (Gott-mit-uns) leather belts.

“I wore my ‘I’m not a Jew’ shirt at the last Al-Quds rally and it worked like a charm! Thanks CiF Watch!”  – Lauren Booth

“It really works. I donned my ‘I’m not a Jew’ shirt in Cairo and not a single man came near me”: Harriet Sherwood (Guardian)

“My BBC colleagues and I just love them. The logo ‘No Jews is Good News’ is my special favourite”: Jeremy Bowen (BBC)

“I wish I were not a Jew” Gear – for those, like Tony Greenstein, Richard Silverstein, Miriam Margolyes and like-minded others, who are proud to be ashamed to be Jewish!