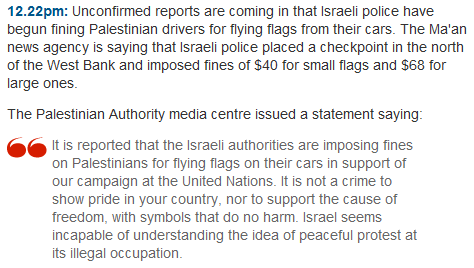 First, as the Guardian didn’t provide a source for the “report” from Ma’an that Israeli police have been fining Arabs who display the Palestinian flag, and after receiving a speedy reply to my inquiry to the IDF Spokespersons Unit unequivocally denying the report, I attempted to hunt down the origins of the claim.

I couldn’t find any mention of the story at the English site of Ma’an, but did find some Tweets eluding to the Ma’an story (all without a link), including one by Rania Zabeneh, an AlJazeera journalist based in the West Bank. (This site reported that the Guardian Live Blog Update which eludes to this story had been Tweeted 52 times.)

The only other place where I could find a reference to this claim (other than a few sites which simply repeated the Guardian text verbatim) was the site of the Palestinian Mission UK, which used language quite similar to the Guardian report, and also cited, as the source, a Ma’an story, without providing a link.

It is reported that the Israeli authorities are imposing fines on Palestinians for flying flags on their cars in support of our campaign at the United Nations. It is not a crime to show pride in your country, nor to support the cause of freedom, with symbols that do no harm. Israel seems incapable of understanding the idea of peaceful protest at its illegal occupation. The Israeli forces would be better employed dealing with real crimes, by its own citizens – the settlers who are waging a campaign of provocative violence by attacking Palestinian villages.

As reported by MaanNews, Israeli police placed a checkpoint between Barta’a and Jenin, north of West Bank and imposed fines on Palestinians for flying flags on their cars. For the small flag they imposed 40$ fine and 68$ fine for the big one.

Finally, I was able to track down a link from this Tweet, which took me to the site of the WAFA Palestine News and Information Agency, and this story in Arabic.

WAFA is the propaganda organ of the PLO, and is under the direct control of Mahmoud Abbas. As noted by Elder of Ziyon, WAFA excels at re-writing history and denying the Jewish connection to Israel.   For example, WAFA has said multiple times that there was never a Jewish Temple in Jerusalem.

Moreover, PLO control of WAFA certainly explains why the Guardian report on the alleged fining of Palestinian motorists included a perfect anti-Israel quote by the Palestinian President.

Here’s the WAFA story on the alleged event, as translated by a supporter of CiF Watch who works as a professional Arabic translator.

The Occupation Authorities confiscated Palestinian flags of Palestinian civilians and vehicles today, Thursday, in the town of Yasouf in the Salfit Governorate.

A security source in Salfit has told Wafa that the Occupation Army has set up a military roadblock this morning at the entrance to the town (one of the main gateways to the city of Salfit), begun searching for Palestinian flags and confiscated flags belonging to citizens.

‘Adnan Yousef, a driver from the town of Masha, said that the Occupation Police issued a thousand shekel fine to one of the drivers for having Palestinian flags in his belongings while he (i.e. the driver) was on his way to participate in one of the marches of support for President Mahmoud ‘Abbas for turning to the UN, yesterday.

First, note how the Israeli police are not just fining Palestinian motorists for displaying the flag in this story, but actually confiscating the evidently contraband national symbol.  Also, note how the fines – reported elsewhere to be $40-$68 – are, in this original story, a thousand shekels ($270).

However, more importantly, it seems as if the sole “source” of the Guardian allegation against Israel was the claim of one official from the PA -controlled Palestinian security service, as relayed to the PA-controlled media.

Moreover, anyone not blinded by ideologically inspired antipathy towards Israel would immediately be skeptical of such a rumor, as it flies in the face of the most rudimentary understanding of the rights of free expression in the Jewish state – which explains, of course, why it was published in the Guardian.