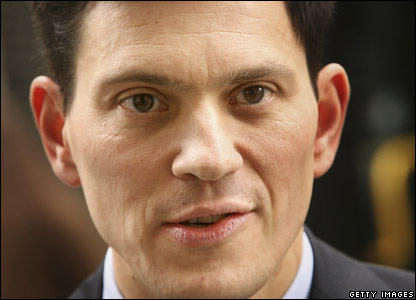 Fully understanding that the best way to gain political points with the British hard left is to vilify Israel, the UK’s former foreign secretary, David Miliband, published an essay at CiF today, “Gaza represents the ultimate failure in politics“.

Miliband’s visit was sponsored by the non-governmental organization Save the Children (an NGO not immune to anti-Israel bias according to NGO Monitor) and, as with The Telegraph’s report on Gaza by Mary Riddell titled, “The wretched scandal of Gaza”, which was also based on a tour sponsored by Save the Children, Miliband predictably attributes blame for Gaza’s situation solely on Israel.

After listing alleged economic deprivations in Gaza, per Save the Children, Miliband characterizes life in the territory as “traumatic and limited”.

Yet, as even the New York Times acknowledged in a recent report, Gaza is nowhere even approaching one of the world’s poorest places. They wrote:

“There is near universal literacy and relatively low infant mortality, and health conditions remain better than across much of the developing world.”

The story further quotes Mahmoud Daher, a World Health Organization official in Gaza, as saying, “We have 100 percent vaccination; no polio, measles, diphtheria or AIDS. We’ve never had a cholera outbreak.”

Home ownership in Gaza is at 80% according to a report in Ma’an, citing the Palestinian Central Bureau of Statistics.

Additionally, according to the same report, the overwhelming majority of households in Gaza have satellite dishes, and nearly half have computers.

Further, even the International Red Cross has acknowledged that there isn’t anything approaching a humanitarian crisis in Gaza.

Despite Israeli restrictions on materials which could be used to manufacture rockets and other weaponry, everyday nearly 6,000 tons of food, fuel, materials and other supplies are transferred by Israel into Gaza via the Kerem Shalom Crossing. And, thousands of Gazans are treated for free in Israeli hospitals.

Regardless of the fact son the ground, Miliband clearly was intent on advancing a narrative of Palestinian victimhood and Israeli villainy, and writes:

“The situation in Gaza represents the ultimate failure of politics. Nearly three years ago, after the Gaza war, the international community was preoccupied with opening up Gaza. Three years on, there is a stalemate – to match the wider stalemate in the wider search for a Palestinian state that can live alongside Israel.

The first responsibility is with Israel.”

As there’s no moral points to be scored in the UK by holding Palestinians responsible for their own continuing political failures, Miliband, in an over 900 word essay, only mentions Hamas, who rules Gaza, three times, and never in a way critical of the Islamist terrorist regime. Egypt, which also borders Gaza, is mentioned in passing only twice.

Does it occur to Miliband that, whatever economic deprivations exist in Gaza, Hamas is responsible for importing deadly weaponry into the territory, and firing thousands of rockets into Israeli towns, necessitating Israeli defensive measures and restrictions?

Does it occur to Miliband to hold Palestinian Gazans responsible for electing an Islamist group whose very founding charter calls the murder of Jews, and cites the Protocols of the Elders of Zion as “proof” that Jews are indeed trying to take over the world?

Nothing in Miliband’s essay acknowledges these facts, nor suggests that he assigns moral agency to Gaza’s leaders and citizens.

“The condescension involved in setting the bar so low that one denies intended beneficiaries…the hard-won satisfactions of real growth and accomplishment; in short, one fails to…hold them to basic standards of human decency and achievement.”

The former foreign minister’s CiF essay may have assisted his political career, but by setting the bar so low, and not demanding of the Palestinians in Gaza the hard-won satisfactions of real moral and political growth and accomplishments, nor to basic standards of human decency, he, as with so many Guardian left critics of Israel, fails to uphold genuine liberal values.

Milibands bigotry of low expectations hurts Israel for sure, but is much more injurious to the Palestinians.