Scouring the Guardian for anti-Israel and antisemitic bias isn’t as simple as merely reading their Israel, Palestinian Territories, Gaza or Jewish Belief pages on their main site, nor monitoring each commentary and blog at ‘Comment is Free’.

If only it was that easy.

To do an effective job at monitoring the Guardian involves scouring the paper for content in sections one might assume would be apolitical.

Indeed, the latest assault on Israel’s legitimacy can be found in the Travel section of the Guardian, in the innocuous sounding title, “Readers’ Travel writing competition 2011: Summer Holidays“, Nov. 11th.

While the winner of the contest was an essay about travelling to Croatia, the Guardian also listed several notable “Runners Up”.

Among these was an entry titled “The Real Palestine”, by Lucy Arnot, from Scotland.

If Edward Said defined Orientalism as the pervasive Western tradition, both academic and artistic, of prejudiced outsider interpretations of the East, shaped by the attitudes of European colonialism, Arnot’s observations about Palestine seem to represent the liberal, post-Colonial variant of such projections.

First, Arnot tantalizes us with Palestinians gastronomic delights in the form of “kanafeh, an amazing sweet-savoury dessert.”

Arnot, we’re then informed, “couldn’t help but fall in love with the place”, the “incredibly hospitable” of Palestinians in the towns of Bethlehem and Nablus, Hebron and Ramallah – the latter where she visited a Picasso exhibition, saw a dance troupe, had a coffee and nargila pipe in a local cafe.

In fairness, the “Real Israel” does makes a cameo appearance in the form of the all too familiar villainous character actor writ large.

When Arnot’s Israel enters the stage it is seen heartlessly confiscating hundreds of miles of Palestinian land – an inexplicable act of malice in the form of a security barrier – and a bit later there is the specter of faceless Israelis dumping rubbish onto the Palestinian souk in Hebron.

“For me, going to Palestine was about seeing for myself what’s going on there, meeting the people behind the headlines.”

More likely, her “Real” Palestine merely reflects her subservience to popular mores regarding the Jewish state which such “headlines” continually animate.

Perhaps on her next trip, however, she can take a genuinely alternative tour of Palestine, the Palestinian road truly less traveled by journalists and other sensitive souls:

Such a tour would need to include Palestinian journalists imprisoned by the PA for being critical of the government, and then a foray to the offices of Ha’aretz to view up close the workings of a free and feisty, and at times egregiously adversarial, press.

Arnot would visit Palestinian women who have been victims of domestic abuse, and Palestinian relatives of  “honor killing” victims (in which women are murdered by relatives for perceived sexual or moral transgressions), and then perhaps she could interview any number of Israeli women represented throughout every strata of Israeli society; from government, the judiciary, law, medicine, and the military.

Similarly, Arnot may want to visit Palestinians imprisoned by the PA for the “crime” of homosexuality, and then contrast such a culture with, for instance, Tel Aviv’s rich,vibrant, and thriving gay scene.

And, if Arnot wants to get a fuller take of Palestinian culture, she may want to attend one of the PA Authorities ubiquitous official ceremonies honoring the “heroism” of terrorists who achieved great feats in killing Israeli civilians.

But, of course no truly alternative tour of Palestine would be complete without a visit to any number of the terrorist cells operating in the West Bank, such as al-Aqsa Martyr’s Brigades, a coalition of Palestinian militias who represent the military wing of Fatah, the largest faction in the current Palestinian government.

Finally, no visit to Palestine would be complete without a slow, leisurely stroll through Ramallah’s trendy, upscale, neighborhood known as Al-Masyoun, where you simply can’t avoid encountering truly sublime Jihad. 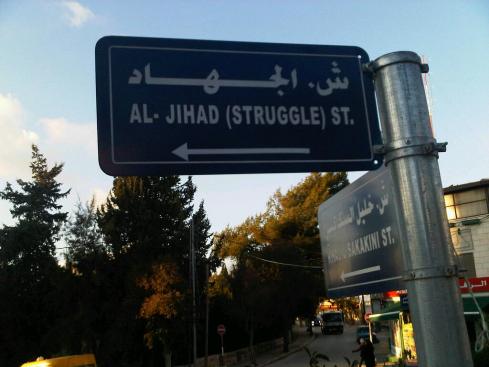 Jewish traveler’s advisory: If you indeed visit Ramallah, as I did as part of a media tour last year, you’ll likely be warned, as I was, not to wear a Star of David, Kippah, or any other jewelry or clothing indicating that you’re Jewish.  Also, please note that, per Palestinian Authority officials, the future independent Palestinian state will be officially Jew-free.