Guardian journalist Deborah Orr may have felt the need, or perhaps was required, to issue a quasi apology in response to the criticism which followed her Oct. 19th Guardian polemic, “Is an Israeli life really more important than a Palestinians’s?”

In her apology she wrote:

“Last week, I upset a lot of people by suggesting Zionists saw themselves as “chosen”. My words were badly chosen and poorly used.”

However, this is far less than accurate as she was clearly suggesting that Jews, as such, and not merely “Zionists” – insofar as Israel is understood as the state of the Jewish people – saw themselves as chosen.

Indeed her original post expressed disgust at the prisoner exchange which freed Gilad Shalit, not out of concern that hundreds of unrepentant terrorists were released for one Israeli soldier – and, indeed, the post was accompanied with a celebratory photo of a released female terrorist who tried to carry out a 2004 suicide bombing – but because, in her moral calculus, such a deal demonstrated Israeli racism.

Unfortunately, much of Orr’s apology largely fails to address the most serious issue with her original Guardian piece.

In the essay, she rails against “the obscene idea that Israeli lives are more important than Palestinian lives”, before concluding contemptuously that “so many Zionists believe…that the lives of the chosen are of hugely greater consequence than those of their unfortunate neighbours.” [emphasis mine]

What Orr suggested can be summed up as follows:

The release of 1027 terrorist prisoners by Israel in exchange for one Israeli is evidence of  the Jewish state’s racism (or feeling of supremacy), a racism embedded in Judaism itself.

CiF Watch recently got into a Twitter exchange with Orr, and asked if she would issue a more thorough apology, addressing the argument she actually made.

Here was her response: 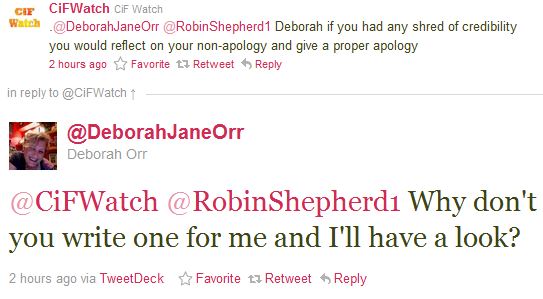 Ok, I’ll take a stab at it. Here’s the apology which we’d like to see Orr sign.

In an Oct. 19th Guardian piece, I made the indefensible argument that Israel’s prisoner deal with Hamas, which secured the release of Gilad Shalit in exchange for over a thousand Palestinian prisoners (many who committed or planned terrorist acts), was evidence of the racist belief by Jews that they are “the chosen people”.

I know now both that such an asymmetrical prisoner deal between Hamas and Israel merely reflected the former’s better negotiating position, and says nothing whatsoever about the morality of Israel, who, obviously, would have preferred to secure Shalit’s release without having to release even one Palestinian prisoner.

More importantly, I now understand the odious history of the distorted narrative of Jews as “the chosen people”.

I realize the truth of what Guardian Readers’ Editor Chris Elliott recently wrote: “Chosenness”, in Jewish theology, tends to refer to the sense in which Jews are “burdened” by religious responsibilities; it has never meant that the Jews are better than anyone else. Historically it has been antisemites, not Jews, who have read “chosen” as code for Jewish supremacism.”

I regret having used a trope which evokes historical antisemitic narratives and understand the following:

‘The Protocols of the Elders of Zion’, the most widely distributed antisemitic forgery in history is premised partly on the idea of Jews’ “chosenness”.

I know now that a distortion of the idea of Jews’ “chosenness” is a widely used theme in perhaps the most popular antisemitic site on the web, Jew Watch.

Finally, I’ve learned that the most well-known white supremacist in the U.S., David Duke, uses the theme of Jews’ “chosenness” to prove that Jews are the most racist people on the planet in his book “Jewish Supremacism”.

In short, such distortions of Jews’ understanding of their identity, and of Judaism itself, are quite dangerous and should be strenuously avoided by those who consider themselves anti-racists.

As an anti-racist, I will, of course, strenuously refrain from advancing such inaccurate, and harmful, stereotypes in the future.

Ms. Orr:  It would certainly be heartening to see you dissociate yourself, without qualifications, from such toxic narratives about Jews and agree to endorse this proposed apology.