On Nov. 22, the Guardian published the following.

The report cited a government commission on the injurious effects of high executive pay which concluded:

How seriously does the crusading liberal Guardian take such populist sentiment?

Well, the most recent figures show that Guardian Editor Alan Rusbridger earned a total annual compensation package in 2010 of £605,000.

As the average British salary is £25,900, Rusbridger’s compensation is 23 times that of the average worker.

Further, Rusbridger’s compensation has risen a dramatic 80% since 2001, though the Guardian Media Group continues to hemorrhage money – losing over £54 million in 2010 alone.

Things have gotten so bad at the Guardian that they even cancelled their annual company Christmas lunch this year, prompting CiF religion correspondent Riazat Butt to Tweet:

And, I think we can all agree that the Christmas classic needed to be updated. 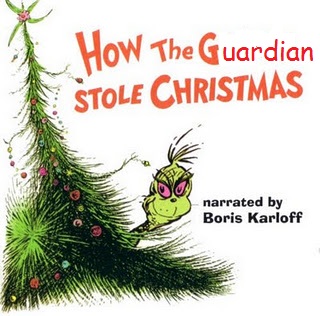 Like Loading...
Tags from the story
Alan Rusbridger, Guardian, Hypocrisy, Uncategorized
Written By
Adam Levick
More from Adam Levick
The BBC presenter, in his final thoughts on the problem, opines that...
Read More