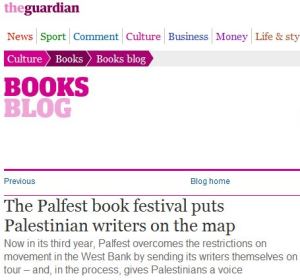 A recently published article at ‘Harry’s Place’ highlighted the refusal of Palestinian poet Najwan Darwish to take part in a discussion at a literary festival which included an Israeli author on the panel. Whilst the subject of the cocktail of politics in the arts and art in politics is an interesting one in itself, for those of us with one eye on the Guardian, the story has a broader relevance.

Najwan Darwish was one of the organisers of and participants in the Palestine Festival of Literature – or PalFest as it is better known – in 2011 and has taken part in previous years too. Anyone who has been reading the Guardian for the last four years or so will be familiar with the annual PalFest event which was established in 2008 because, in addition to this meeting of Western and Palestinian authors having been widely featured in the Guardian, a significant proportion of the participating writers are either Guardian employees or have frequently graced its pages. In fact, one could even go so far as to say that the Guardian played something of a role in the establishment of this yearly Israel-bashing session in literary fancy-dress known as Palfest.

Eleven years ago, in December 2000, the Guardian sent Egyptian-born author Ahdaf Soueif to produce a ‘special report’ on the then two-month old Second Intifada.  As a novelist, Soueif was perhaps unfettered by journalistic constraints such as the need to appear ‘fair and balanced’, but even so, her subsequent series of articles did not commence well.

“I have never, to my knowledge, seen an Israeli except on television. I have never spoken to one. I cannot say I have wanted to. My life, like the life of every Egyptian of my generation, has been overcast by the shadow of Israel. I have longed to go to Palestine, but have not wished to go to Israel. And now I am going there.”

The Guardian described Soueif’s reports as a “remarkable account” and indeed they were. Remarkable for their one sidedness, for the stereotypical portraits of the few Israelis she described, for the deliberate repeated omission of context and even for downright lies which may – if we’re being charitable – be a product of Soueif’s Egyptian upbringing, but which the Guardian chose to print nevertheless.

This Guardian sponsored and initiated trip, together with a subsequent one in 2003, appears to have been the catalyst which prompted the acceleration of Ahdaf Soueif’s political activism on behalf of the Palestinian ’cause’. She is a patron of the Palestine Solidarity Campaign, a member of CAABU and a supporter of ‘Britain2Gaza‘ which has links to Hamas activists in the UK.  In 2008 she and others set up the UK registered charity ‘Engaged Events’  (number 1123273)  which is, according to its own report, “the registered name of the Palestine Festival of Literature”.

PalFest’s creative producer, film-maker Omar Robert Hamilton, who is Ahdaf Soueif’s son and – like his mother – also a Guardian contributor, described its birth as follows.

“Ahdaf Soueif and Brigid Keenan were talking — as they almost always do — about what they could do to help Palestine.  They came up with the idea of encouraging authors and artists working in English to visit Palestine and take part in literary activities alongside their Palestinian colleagues.”

Hamilton also runs the PalFest blog where he cites under the heading ‘useful books’ some of the more infamous works by Ali Abunimah, Ben White, Eyal Weizman, Ghada Karmi, Ilan Pappe, Shlomo Sand and Mearsheimer & Walt, among others.

Given the political tone which inevitably pervades the writings of PalFest trustee Ahdaf Soueif and other participants describing their experiences, one may reasonably conclude that this festival is more about getting Western household names to join in the assault on Israel’s legitimacy than about bringing English Literature to the Palestinian people. Unfortunately, the Charity Commission of England & Wales is notorious for ignoring its own guidelines on the subject of political activity by charities.

“However, a charity cannot exist for a political purpose, which is any purpose directed at furthering the interests of any political party, or securing or opposing a change in the law, policy or decisions either in this country or abroad.”

“However, trustees must not allow the charity to be used as a vehicle for the expression of the political views of any individual trustee or staff member”

Co-founder of PalFest and also currently a trustee is author and diplomatic wife Brigid Keenan Waddams who is married to former UK and EU ambassador Alan Waddams. Like her husband (here describing Hamas founder Ahmed Yassin as a ‘spiritual leader’), Keenan Waddams appears to hold opinions which have underwhelmed some readers of her books.

“I was a bit shocked by all the political “anti-Israel” sentiment which seemed very out-of-place in a book described as “laugh out-loud” funny. And I certainly found nothing funny about her comments regarding Richard Burton and “Jewish moneylenders”.”

“My main problem with Ms Keenan was that she constantly harps on about her views on Palestine. As it happens, I’m pretty much of the same opinion as the author and her husband but I do think she mentioned the subject too many times, mostly without any apparent need. Furthermore, her comments about Jewish moneylenders had, I felt, no place in this book.”

Rather predictably, Keenan Waddams is also a serial letter-writer and petition–signer on Israel-related subjects.

PalFest’s financial support comes from a variety of organisations including the George Soros Open Society Foundation, the British Council, the A.M. Qattan Foundation (which has also funded, among others, Al Shabaka and Miftah), the American Colony Hotel, Christian Peacemaker Teams, and several universities. According to self-declared information on Engaged Events’ partner page at the Anna Lindh Foundation, it has also received funding from the Ford Foundation and UNESCO.

At the 2011 festival, out of a total of 20 participants, Ahdaf Soueif and Raja Shehadeh were joined by Guardian-associated writers Gary Younge, Ursula Owen and the director of the Guardian’s own Hay Festival, Peter Florence.

PalFest’s organisers claim to be inspired by the late Edward Said’s call to “reaffirm the power of culture over the culture of power”. Najwan Darwish’s latest outburst together with the connections of Ahdaf Soueif to the Palestine Solidarity Campaign – increasingly embroiled in racism-related scandal – and the Hamas-linked Britain2Gaza might perhaps prompt the disproportionate number of Guardian-associated writers and staff regularly invited to take part in this annual Israel-bashing fest to ask themselves exactly what kind of ‘culture’ they are helping to promote.