When I first glanced at Elder of Ziyon’s post, “To Reuters, they aren’t just ‘Jewish settlers‘ anymore“, the photo of a bloodied Israeli sickened me, but for reasons which went beyond the facts of the story – a Jew who was stoned by Arabs in the Jerusalem neighborhood of Sheikh Jarrah.

First there were “settlers.”

But that wasn’t inciting enough.

So we then had “Jewish settlers.”

But with overuse, it didn’t bring in the hate that journalists wanted to bring across.

So then came “Right-wing Jewish settlers.”

But even that didn’t capture the seething disgust that objective journalists wanted to convey towards them.

So now we have, from Daylife/Reuters:

Then, Elder posted the photo from Daylife/Reuters: 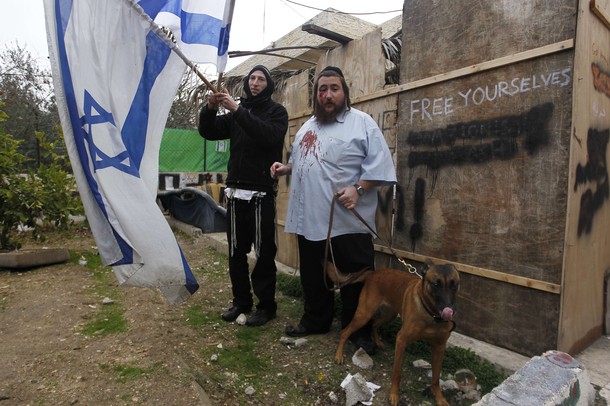 Elder then included the Reuters caption:

Extreme right wing Jewish settlers, one of them injured from a rock hurled by pro-Palestinian activists during a weekly protest, stand in front of their house in the Sheikh Jarrah neighborhood of East Jerusalem December 30, 2011. Some 100 activists protested against the Jewish settlement in the predominantly Arab neighborhood and threw rocks towards a house occupied by the settlers leading them to confront the protesters, to minor clashes. [emphasis mine]

So, here is yet another example of the lazy political labeling of Israelis who reside in neighborhoods of Jerusalem where Jews lived for thousands of years – except for the period from 1949 to 1967, when Jordan cleansed Jews from the “East” section of the city.

But, the reason for my emotional reaction was that, unlike the “journalist” who wrote the caption, I personally know the victim of the Palestinian attack.

His name is Yaakov.

My wife and I have spent more than a few Shabbat dinners with Yaakov at the home of the Jerusalem Rabbi who presided over our wedding.

Yaakov is not an “extremist” in any sense of the word unless, of course, you consider an extremist to be any Jew who lives in neighborhoods across the arbitrary green line.

Yaakov is an observant, learned Jew who liberally and humbly imparts his wisdom and erudition on Torah (Hebrew Bible) and Halacha (Jewish law) to his family, friends and Shabbat guests.  But, Yaakov, like me, grew up in the U.S., and is also literate, witty and pithy in musing on the often farcical minutia of secular American pop culture.

Moreover, Yaakov is real, nuanced and certainly – as with everyone who inhabits this beautiful yet complicated nation – not an abstraction.

An extreme, right-wing Arab threw a rock at a man because he was a Jew – a Jew whose name is Yaakov.

0 replies on “His name is Yaakov: How the mainstream media dehumanize Israeli Jews”