The latest Guardian/AP stories on violence in Israel’s south are typical of such reports on terror from Gaza, which typically achieve the following (in the headline, text and photos): A blurring of cause and effect; Characterizing Israeli targeting of terrorists who are planning (or about to launch) attacks as “an escalation”; An emphasis on the deaths of Palestinian “militants”; And severely downplaying the Gaza rocket fire and resulting Israeli casualties. 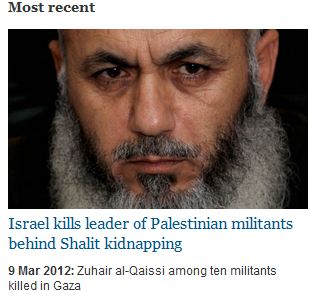 An Israeli airstrike has killed the commander of the militant group behind the abduction of Gilad Shalit, the Israeli soldier who was held captive for more than five years and freed in a prisoner swap for more than 1,000 Palestinians.

The midday attack marked the highest profile Israeli strike against the coastal strip in several months and immediately set off a violent escalation after a period of relative calm. [emphasis added]

Later in the piece (five passages down) we learn that Zuhair al-Qaissi, the commander of the armed wing of the Popular Resistance Committee, was targeted due to IDF intelligence that his group was planning a combined terror attack that was to take place via Sinai in the coming days, but the headline would lead you to believe the attack was revenge for the Shalit kidnapping.

According to the IDF, the planned terror attack was apparently going to include infiltration into Israel at several locations, the planting of explosive devices, and a possible abduction.

About that “relative calm”: As of Friday, when the Guardian/AP story was posted, there had been over 90 rockets launched from Gaza into Israel in the previous 69 days. (See our blog’s rocket counter on the left side of the page for frequent updates.)

By what conceivable standard would such an assault be considered “relative calm”?

Today, the Guardian had a new story, “At least 15 killed in Israeli air strikes on Gaza“: 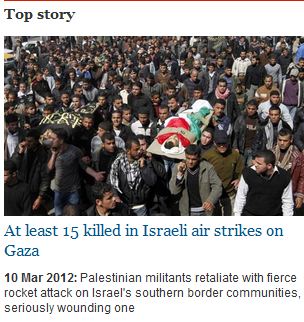 The story begins by noting that “Israeli air strikes on the Gaza Strip have killed at least 15 people in an escalation of the worst clashes with Palestinian militants so far this year” [emphasis added], while barely noting that all those killed were terrorists – a civilian to combatant ratio of 0:15.

Remarkably, nowhere in latest update is it reported that eight Israelis were injured (one critically) by shrapnel caused by the Hamas rocket fire. In the Eshkol Regional Council, a 40-year-old man was seriously injured from rocket shrapnel, a second man was moderately injured by shrapnel in his stomach, and a third was lightly injured. Paramedics said the injured were foreign workers.

Nor, does the Guardian find it worth reporting that more than 500,000 Israelis are currently forced to stay in bomb shelters.

since Friday, 130 rockets were fired into Israel, into the cities of Ashdod, Be’ersheba, Yavne, Netivot and Ashkelon; as well as into the Eshkol and Shaár Ha’Negev regional councils.

As I finished writing the last sentence, my wife told me she just got off the phone with our Aunt and Uncle in Ashkelon to see if they were okay, and, that the call had to be cut short due to the rocket sirens which went off in the city as they were talking, forcing them to go to the bomb shelter in the building.