On March 12th Harriet Sherwood filed a report from Beit Lahiya in the northern Gaza Strip which dealt extensively with the death of 15 year-old Nayif Qarmout. 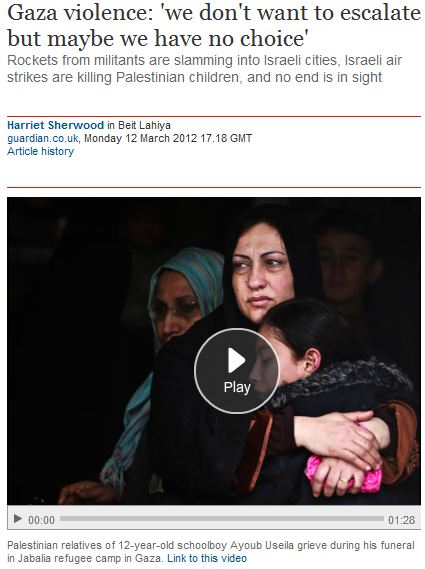 Since her arrival in the region, one of the hallmarks of Sherwood’s reporting from the Middle East has been her unquestioning repetition of versions of stories told to her by partisan sources and the presentation of hearsay as fact. Typically, in this report Sherwood stated:

“The boys had set off for school but spotted some militants running away after firing a rocket. They went to investigate the launcher – perhaps out of simple teenage curiosity, perhaps to see if there was something they could salvage for sale. Then an explosion killed Nayif and injured five others.”

In the next sentence, Sherwood added:

“Israel denied it had carried out an air strike.”

Revealingly, she made no attempt to expand upon the Israeli announcement or to investigate the possibility that Qarmout might not have died as a result of an air strike, despite the fact that at the time of the publication of her report an AFP journalist on the scene had already reported that there was no evidence of such a strike.

“According to an AFP correspondent at the scene, there were no signs of any impact on the ground which could have been caused by a missile, with the most likely cause of his death being some kind of explosive device he was carrying.

The victim lost his legs in the blast and his body was covered with shrapnel wounds, he said.”

Pictures from the scene appear to support the opinion of the AFP reporter and the BBC also pointed to the lack of evidence of an Israeli strike.

Sherwood, however, continued her report by stating that:

“Nayif was one of 23 Palestinians killed since Friday in an escalating round of attack and counter-attack between militants in Gaza and the Israeli military.”

“Five civilians – two teenage boys, two men in their 60s and a woman aged 30 – are among the Gaza dead, since Israel assassinated a militant leader in order, it says, to prevent an attack aimed at its citizens.”

Sherwood not only neglected to inform her readers that the vast majority of those killed in the Gaza Strip were terrorists actively involved in shooting missiles at Israeli civilians (continuing to employ the sickening euphemism ‘militants’ to describe terrorists carrying out war crimes), but also failed to provide accurate background for the killing of Popular Resistance Committees leader Zuhir al Qaisi and the terror attack he and his organization were about to perpetrate.

Rather than lazily parroting the claims of Qarmout’s family and friends, any reporter worth their salt would have investigated the possibility raised by the AFP reporter that the youth’s injuries suggest that he may have been carrying an explosive device. It is, of course, common knowledge that terrorist groups – including the Palestinian Islamic Jihad, which is one of the main players in this latest round of violence – recruit child soldiers.

Another potential factor totally ignored by Sherwood in her reports of civilian casualties in Gaza is the frequent falling short of rockets aimed at Israeli towns and villages. It is estimated that since the latest barrage began last Friday, some 50 rockets launched by the PRC or PIJ have landed inside the Gaza Strip, endangering the civilian population there.

Sherwood’s highly emotive and superficial reporting is, of course, not benign. Unknown numbers of readers now believe that Nayif Qarmout was killed in an Israeli air strike despite there being no proof of that claim.

The question which Harriet Sherwood and her editors need to answer is why they chose to publish this non-evidence-based report when information pointing to its unreliability was already available and why no qualifying update has (at the time of writing) yet been added to Sherwood’s article.