This essay was written by Judea Pearl, president of the Daniel Pearl Foundation, named after his son, who was kidnapped and murdered in Pakistan while investigating the case of a convicted shoe bomber. (It is being published here with the permission of Judea Pearl, via the site: Zionism on the Web) 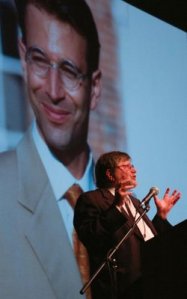 In the past three months, I have visited four “troubled” campuses — Duke, York (Canada), Columbia and UC Irvine — where tensions between Jewish and anti-Zionist students and professors have attracted national attention.

In these visits, I have spoken to students, faculty and administrators, and I have obtained a fairly gloomy picture of the situation on those and other campuses.

Jewish students are currently subjected to an unprecedented assault on their identity as Jews.

And we, the Jewish faculty on campus, have let those students down.

We have failed to equip them with effective tools to fight back this assault.

We can reverse this trend.

In other words, I submit that anti-Zionism is a form of racism more dangerous than classical anti-Semitism. Framing anti-Zionism as racism is precisely the weapon that our students need for survival on campus.

Anti-Zionism earns its racist character from denying the Jewish people what it grants to other collectives (e.g. Spanish, Palestinians), namely, the right to nationhood and self-determination.

Are Jews a nation? A collective is entitled to nationhood when its members identify with a common history and wish to share a common destiny. Palestinians have earned nationhood status by virtue of thinking like a nation, not by residing where their ancestors did (many of them are only three or four generations in Palestine). Jews, likewise, are bonded by nationhood (i.e., common history and destiny) more than they are bonded by religion.

The appeal to Jewish nationhood is necessary when we consider Israel’s insistence on remaining a “Jewish state.” By “Jewish state” Israelis mean, of course, “national Jewish state,” not “religious Jewish state” — theocratic states (like Pakistan and Iran) are incompatible with modern standards of democracy and pluralism. Anti-Zionist racists use this anti-theocracy argument repeatedly to delegitimize Israel, and I have found our students unable to defend their position with conventional ideology that views Jewishness as a religion.

Jewishness is more than just a religion. It is an intricate and intertwined mixture of ancestry, religion, history, country, culture, tradition, attitude, nationhood and ethnicity, and we need not apologize for not fitting neatly into the standard molds of textbook taxonomies — we did not choose our turbulent history.

As a form of racism, anti-Zionism is worse than anti-Semitism. It targets the most vulnerable part of the Jewish people, namely, the people of Israel, who rely on the sovereignty of their state for physical safety, national identity and personal dignity. To put it more bluntly, anti-Zionism condemns 5 million human beings, mostly refugees or children of refugees, to eternal statelessness, traumatized by historical images of persecution and genocide.

Anti-Zionism also attacks the pivotal component of our identity, the glue that bonds us together — our nationhood, our history. And while people of conscience reject anti-Semitism, anti-Zionist rhetoric has become a mark of academic sophistication and social acceptance in Europe and in some U.S. campuses.

Moreover, anti-Zionism disguises itself in the cloak of political debate, exempt from sensitivities and rules of civility that govern interreligious discourse. Religion is ferociously protected in our society — political views are not.

So, in the name of “open political debate,” administrators would not think twice about inviting MIT linguist Noam Chomsky to speak on campus, though his anti-Zionist utterances offend the fabric of my Jewish identity deeper than any of the ugly religious insults currently shocking the media. He should be labeled for what he is: a racist.

Strategically, while accusations of anti-Semitism are worn out and have lost their punch, charging someone with racism makes people ask why anyone would deny people the right of self-determination in a sliver of land in the birthplace of their history. It shifts the frame of discourse from debating Israel’s policies to the root cause of the conflict — denying Israelis their basic rights as a nation.

Charges of “racism” highlight the inherent asymmetry between the Zionist and anti-Zionist positions. The former grants both Israelis and Palestinians the right for statehood, the latter denies that right to one, and only one side. This asymmetry is the most effective weapon our students should use in campus debates, for it puts them back on the high moral grounds of “fair and balanced” and forces their opponents to defend an ideology of one-sidedness.

For example, I have found it effective, when confronting an anti-Zionist speaker, to ask: “Are you willing to go on record and state that the Israel-Palestine conflict is a conflict between two legitimate national movements?” Western audiences adore even-handedness and abhor bias. The question above forces the racist to unveil and defend his uneven treatment of the two sides.

America prides itself on academic freedom, and academic freedom entails freedom to teach hatred and racism — we graciously accept this fact of life. However, academic freedom also entails the freedom of students to expose racism, be it white-supremacy, women-inferiority, Islamophobia or Zionophobia wherever it is spotted. Not to censor, but to expose — racists stew in their own words.

In summary, I believe the formula “Anti-Zionism = Racism” should give Jewish students the courage to both defend their identity and expose those who abuse it.