One of the more common traits of self-styled liberals at the Guardian is that – though they often view themselves as erudite, morally enlightened intellectuals – the “logic” which informs their polemics is often remarkably facile.  Particularly, they demonstrate a tendency to recycle the same “right-wing” villains in response to any political phenomenon they find displeasing.

A perfect example  is Marina Hyde’s CiF essay, “War on Iran? It is too soon to reminisce about Iraq, let alone have a repeat“, March 23.

Before getting to her simply astonishing defense of Mahmoud Ahmadinejad, here are a few highlights.

First, this sophisticated Brit’s language is indistinguishable from what was employed by the most sophomoric anti-American left back when I was in college.  Hyde includes, among the antagonists of her tale, “The U.S War Machine”, “U.S. War Mongers”, and “creatures of the US military-industrial complex”.

The near immediacy of it renders fusty the idea of history repeating itself as farce. It would be farce repeating itself as farce, were it not all so sensationally unfunny. The very idea that US hawks should seek to double down on their fiascoid adventure in Iraq by aiming their sights on Iran should be deemed too far-fetched even for satire – instead, it gains daily traction in the most familiar of places. It’s not just the same news outlets; it’s the same faces.

With a handful of exceptions such as Dick Cheney, who is living off the fat of the last outing in the region, the Class of 2002 are back in business and beating the drums.

But while the amnesia cycle contracts every time, the one thing that takes far longer than it used to is extricating ourselves from these wars. The Republican party seems to need them more than ever, unified only when defining themselves against the so-called common enemy.

While we can only wonder who she’s referring to as those “beating the drums” for war, evidently lost on Hyde is the fact that a Democratic, and decidedly liberal, U.S. President is now the Commander-in-Chief.

But, in what can only be described as a quintessentially Guardian example of an ideologically inspired capacity to engage in almost incomprehensible propaganda, Hyde writes:

The airwaves and newswires teem with politicians and pundits shrieking and pointing at Mahmoud Ahmadinejad’s years-old exhortation to “wipe Israel off the map”, even though this translation has been repeatedly debunked – a fact that conveniently never sticks with those seeking to make hay. And once again, their strident voices drown out the experts.

Whatever one’s opinion about possible military intervention in Iran, the mendacity those who run interference for the Iranian regime’s transparent and well-documented malevolence towards the Jewish state can’t be overstated.

Here is a sample of what Hyde’s “experts” evidently were unable to locate.

And, it’s not just Ahmadinejad. 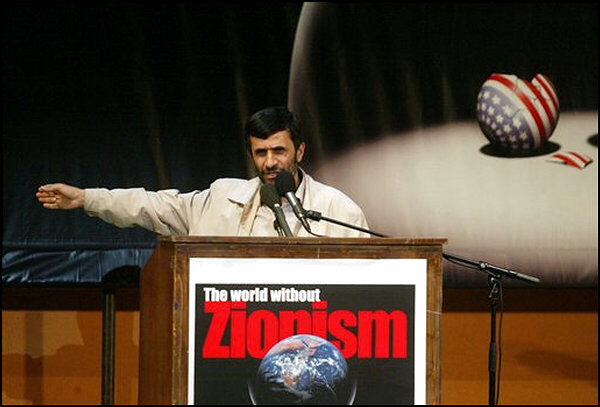 The suggestion that Iranian leaders have not indeed called repeatedly for Israel’s destruction is, it seems, in some ways intellectually similar to Holocaust denial.  In both cases, conclusions are reached based on the political and ideological causes they serve.

Whether or not Holocaust deniers truly believe their own rhetoric about the Holocaust is one issue.  However, just a vital is the political ends such narratives serve – the notion that Jews are not victims, not worthy of our sympathy, and the implicit suggestion that there has been a successful Jewish conspiracy to convince the world of this historically fictitious mass murder.

Similarly, those who deny Iranian leaders’ calls for Israel’s destruction appear to be at least partially motivated by the belief that such “propaganda” is advanced by those with ulterior motives – right-wingers, Zionists, and similarly villainous war-mongers who seek a military confrontation with Iran.

Whether or not such commentators making such claims are motivated by antisemitism is beside the point.

Ultimately, the politics which represent the foundation of their belief that Ahmadinejad has never in fact called for Israel’s destruction rests, in large measure, on a conspiracy theory and extreme malice towards their political opponents.

It’s not enough for Guardian columnists to simply make a case against war with Iran.  They must impute, to those one the other side of the debate, the worst faith and most ignoble motives,  conjuring caricatures of cynical, malevolent, manipulators disseminating propaganda in service of a covert, dangerous agenda.

That commentators such as Hyde actually believe themselves free of what they see as intellectually crippling right-wing closed-mindedness is a stunning self-delusion.

Those self-described “liberals” who sow doubt regarding even the most explicit calls for the mass murder of Jews have come to resemble the very right-wing caricatures they’re so fond of demonizing.

Like Loading...
Tags from the story
Anti-Zionism, Comment is Free, Guardian, Iran, Mahmoud Ahmadinejad, Marina Hyde, Uncategorized
Written By
Adam Levick
More from Adam Levick
We don’t know much about UK-based journalist Jon Stone, other than the...
Read More