At the PSC’s “Global March to Jerusalem” outside the Israeli Embassy yesterday from 5pm to 7pm a three-year-old girl listened to two hours of hate-filled chanting and sermons before being called to the platform by her mother.

The microphone was thrust under her nose so she could do her own version of “Free Free Palestine”. Who needs preachers of hate when children are so indoctrinated with hate from birth in some British homes (see clip):

The little girl had heard repeated calls for Israel’s destruction and some things said about Jews in Arabic, which I didn’t understand.

She heard (‘Comment is Free’ contributor) Ghada Karmi, who teaches Arab and Islamic Studies at Exeter University, declare “Israel is finished”, “it does not to deserve to continue as a state”, “Jerusalem does not belong to Jews”, “we respect all religions but we do not allow one group to take over this wonderful city” and “we muct act against Israel’s interests” (see clip):

It was Karmi, of course, who recently sat silently by as Ken O’Keefe compared Jews to Nazis. Karmi doesn’t seem to trust Jews to look after Jerusalem, but when the Jordanians controlled Jerusalem from 1949 to 1967 Jews were forbidden to visit it and its Jewish cemeteries were desecrated. Now people of all faiths can freely worship there, as long as your intentions are benign.

The “Global March to Jerusalem” turned out to be nothing more than a couple of hundred indoctrinated Israel haters taunting an empty Israeli Embassy building.

On its news feed Iran’s Press TV mocked the paltry turnout of pro-Israel activists and PSC head-honcho Sarah Colborne announced, to cheers, that those activists had left early.

Note to Press TV and Sarah Colborne: Friday night is Shabbat, the holiest and most precious time for Jews. They are with their families. That is why only 20 came and why those that came left early.

Here are Colborne et al aiming their chants towards an empty Israeli embassy building as Shabbat is about to come in. Even Colborne looks embarrassed:

As I walked back to the tube I chatted to some of the protesters.

I asked two teenage girls what they were doing to stand up for their oppressed sisters in Saudi Arabia who are not allowed to show their faces like these girls were doing. They answered that the Saudis treated women with more respect than women over here get. I asked a teenage boy whether he supported suicide bombings inside Israel. He said it was a response to having your land stolen.

With such sentiments you can start to understand where Toulouse Jew murderer Mohamed Merah came from. 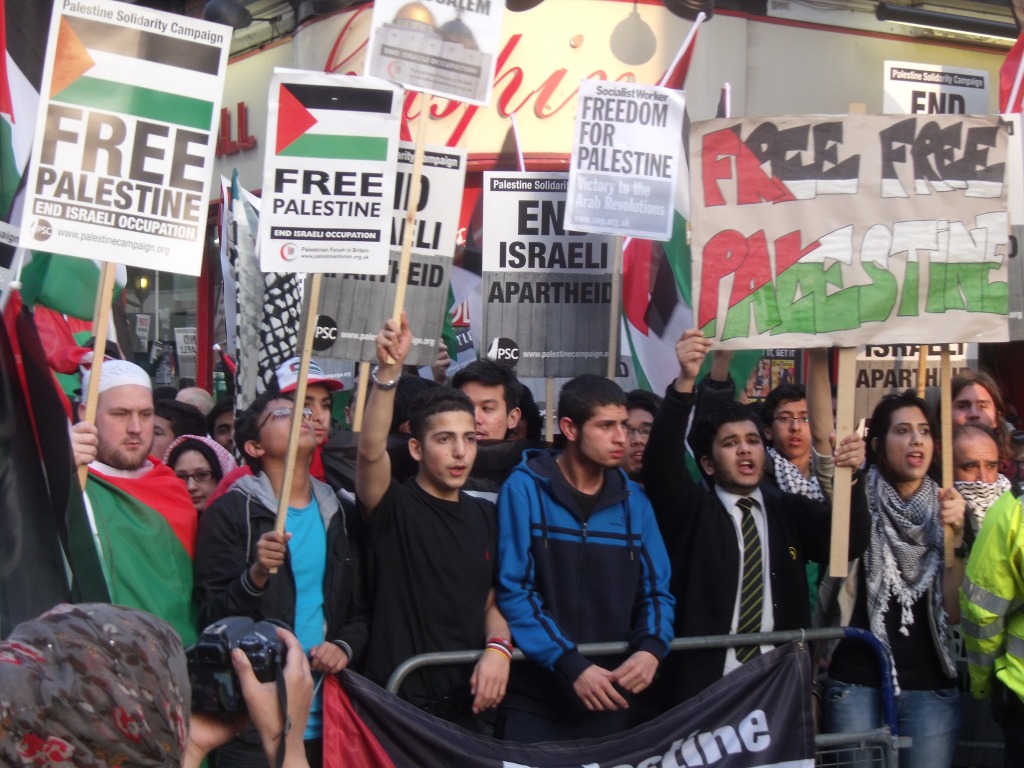