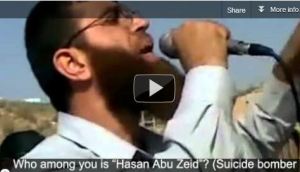 It’s impossible to read the following story, as reported by Sky News, without recalling the Guardian’s advocacy on behalf of Palestinian Islamic Jihad terrorist Khader Adnan, whose administrative detention by Israeli authorities made him a cause celeb among the anti-Israel ‘journavist’ community.

The Guardian published five separate sympathetic pieces about Adnan (including a risible CiF essay by his wife who characterized the spokesperson for a group responsible for terror attacks which murdered hundreds of Israelis as “selfless”) who they comically referred to as a Palestinian “baker”.

Likely never to grace the pages of the Guardian, nor interest their Israel correspondent Harriet Sherwood, is the story of two Palestinian journalists arrested by the PA for criticizing Palestinian leadership.

Tarek Khamis, who works for a West Bank news agency, was detained by Palestinian security forces in Ramallah after he used the social networking site to condemn the arrest of another local journalist and blogger.

Esmat Abdel Khalik is being held in solitary confinement after she accused Palestinian President Mahmoud Abbas of being a “traitor” on her Facebook page.

A spokesman for the Palestinian Authority said Ms Abdel Khalik was being held for “extending her tongue” against the elected Palestinian leadership.

In a sign of a deliberate crackdown against local reporters, a third Palestinian journalist was arrested last week after writing an article alleging corruption in the Palestinian diplomatic mission in France.

Youssef al Sahyeb has been charged with slander and defamation after a complaint lodged by the Palestinian foreign minister Riad Malki. The reporter was released on $7000 (£4,400) bail after protests by fellow journalists in the West Bank.

“Journalists are entitled to express their opinions without fear of being imprisoned and harassed,” the organisation said in a statement.

The Palestinian Authority has denied claims that it has set up a special unit to monitor blogs and social network postings.

Press freedom is meant to be protected under Palestinian law but the legislation allows for journalists to be prosecuted for activities which threaten “Palestinian unity or values”.

If you go to the Palestinian Territories page of the Guardian there’s no report on this flagrant assault on freedom of the press in PA.

Do I even have to ask what kind of coverage the Guardian would provide if Israel arrested Ha’aretz (or +972) journalists for criticizing Prime Minister Netanyahu?

Of course, such a scenario is inconceivable, as journalists here routinely engage in the most scurrilous critiques of Israeli leaders with complete impunity.

Moreover, those on the left who passionately advocate for the creation of a Palestinian state strangely never seem bothered by such stories – political phenomena in the PA which demonstrates their decidedly illiberal political culture.

Can any true progressive sincerely argue at this point that the new nation of “Palestine” will be even marginally democratic, pluralistic, or tolerant?

On Thursday, Abdel Khalik’s detention was extended for 15 days and she was put into solitary confinement. Ma’an News Agency now reports that, according to a member of the Palestinian Journalists Syndicate, Khaleq was transferred, on Tuesday, to a hospital after her health deteriorated.

Like Loading...
Tags from the story
Guardian, Harriet Sherwood, Mahmoud Abbas, Palestinian Authority, Palestinian territories, Sky News, Uncategorized
Written By
Adam Levick
More from Adam Levick
With 2012 coming to a close, I decided to look back at...
Read More