I was sharing with a fellow blogger recently that I occasionally read something by far left Jewish critics of Israel that is beyond merely risible, but, rather, so beyond the pale, so unhinged and full of self-hatred (those Jews who are ‘proud to be ashamed to be Jewish’) that its almost as if we’re being set up: that such commentary is the work not of Jews, but of trolls trying to provoke us.

While working on several Guardian related posts, I took a short break and came across commentary from the group Jewish Voice for Peace about Passover so inane that I can barely wrap my mind around the thought process involved in its conception.  But, it should provide context the next time the far left Jewish group weighs in on the Israeli Palestinian Conflict.

(The Guardian causes me enough Tsoris that I occasionally allow myself a bit of blogging comic relief, and a sincere H/T to JVP for the low hanging fruit).

While I’m all too familiar with the Jewish far left in Philadelphia (where I lived most of my life), and have seen “alternative” Passover Haggadot (Jewish texts that set forth the order of the Passover Seder), before, this one by JVP truly jumps the shark.

As Elder of Ziyon noted: The Jewish Voice for Peace “Haggadah” could have easily been written by Hamas in its attempt to portray Jews as the evil protagonists. 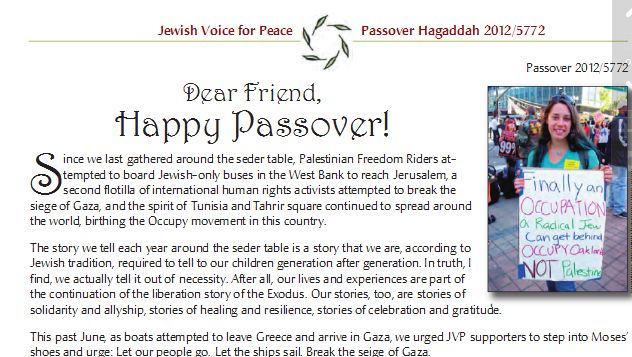 Here are excerpts from the JVP document. (Emphases mine, unintentional comedy courtesy of JVP)

In the wake of the revolutions throughout the Arab World, and particularly in Egypt, we want to acknowledge the distinction between “mitzrayim” — the narrow place, where the story we tell at Passover takes place — and Egypt, the modern-day nation-state. We are not conflating contemporary Egyptians with the pharaoh and taskmasters that appear in the Passover story.In the U.S., and worldwide, anti-Arab racism and Islamophobia saturate our media and our culture, and we must be vigilant to oppose it and interrupt it at every turn.

The word Yisrael (Israel) when found in the liturgy (religious text) does not refer to the modern nation/state of Israel, rather it derives from the blessing given to Ya’akov (Jacob) by a stranger with whom he wrestles all night. When the stranger is finally pinned, Ya’akov asks him for a blessing. The stranger says,“Your name will no longer be Ya’akov but Yisrael for you have wrestled with G-d and triumphed.” Therefore when we say “Yisrael” in prayer we are referring to being G-d-wrestlers, not Israelis.

Here is JVP’s addition to the Seder plate:

Olive – Symbolizing the self-determination of the Palestinian people and an invitation to Jewish communities to become allies to Palestinian liberation struggles.

JVP on the symbolism of breaking the middle matzoh:

As we break the middle matzoh we acknowledge the break that occurred in Palestinian life and culture with the establishment of the State of Israel in 1948 when hundreds of villages were destroyed and hundreds of thousands of people displaced. This damage cannot be undone — but repair and return are possible.

General JVP guilt on the offense of Israel’s existence.

How will we, as Jews, bear witness to the unjust actions committed in our name?

Our freedom was bought with the suffering of others. As we packed our bags that last night in Egypt, the darkness was pierced with screams. May the next sea-opening not also be a drowning; may our singing never again be their wailing. We shall all be free, or none of us shall be free because our liberations are intertwined.

This is a  JVP version of the part of the Seder where Jews dip wine onto their plate to symbolize the plagues on Egypt by God as punishment for enslaving the Jews.  Here’s what they think we should be thinking about, regarding Israeli villainy and Palestinian suffering, when dipping the wine.

JVP version of Dayanu (If God had bestowed to the Jews even one of the many miracles enumerated in the Haggadah, it would have been enough)

When soldiers rounded up Palestinian men and massacred them collectively – we should have said enough.

When Palestinian men were forced into labor camps, where their labor included destroying Palestinian homes – we should have said enough.

JVP, on the bitter herb on the Seder plate, traditionally meant to symbolize the bitterness of slavery under Pharaoh:

On the meaning of the Hillel sandwich

We prepare to eat the Hillel sandwich with the sweetness of haroset and the bitterness of maror, highlighting the challenge to us to taste freedom in the midst of oppression, to be aware of oppression even as we are free, we hold the contradictions of bitter and sweet.

I truly don’t know where to begin, and fisking their version is almost too easy, so I decided to provide an addition to their text: My version of Guardian Left/Seumas Milne/JVP friendly “Why is this night different from all other nights?”

What makes this night different from all [other] nights?

On all nights we eat sitting upright or reclining, and on this night we all recline!

The tray is restored to its place with the matzoh (organic, and made with union, and non-exploitative, labor) partly uncovered. Now we say “We were slaves. . .”

We were slaves to  rightwing Jewish thought in Egypt, and the  young progressive Jewish community took us out from there with a strong hand and with an outstretched arm. If  the anti-imperialists had not taken our fathers out of Egypt, then we, our children and our children’s children would have remained enslaved to  Zionism, the Jewish lobby, neocons, militarism, & capitalism . Even if all of us were wise, all of us understanding, all of us knowing  the Israel section of the Guardian, we would still be obligated to discuss the exodus from Egypt; and everyone who discusses the exodus from Egypt at length is praiseworthy.

Hey, its only a draft.

Like Loading...
Tags from the story
Anti-Zionism, Antisemitism, Delegitimization, Elder of Ziyon, General-antisemitism, Jewish Voice for Peace, Passover
Written By
Adam Levick
More from Adam Levick
Here’s the Aug. 2 edition of our daily roundup of links from...
Read More