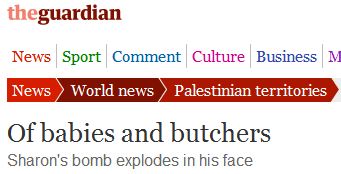 [While I read the Guardian everyday now, I wasn’t so “privileged” back during the Palestinian wave of terror known as the Second Intifada. While I did know that the Guardian made a morally incomprehensible comparison between Jenin (Israel’s Operation Defensive Shield) and 9/11, I didn’t realize that they never published an apology, even after the narrative of “Jenin Massacre” was definitively disproven. This essay at Harry’s Place, (which they submitted to, and was rejected by, editors at Comment is Free), thoroughly fisking the Guardian’s coverage of the battle of Jenin, is simply required reading for anyone wishing to understand their institutional anti—Israel journalistic malice   — AL]

For two full weeks in April of 2002, the Guardian ran wild with lurid tales of an Israeli massacre in the Palestinian city of Jenin on the West Bank — a massacre that never happened.  The misrepresentations and outright fabrications have never been properly addressed in the ten ensuing years, as though the Guardian’s editors believe nothing more than some hasty reporting and bad sourcing happened.  But the reportorial failings were far too systematic to be so dismissed, and until the Guardian conducts a thorough investigation of its own errors and publishes a detailed account to its readers, its integrity on Israel-Palestine will continue to be called into question.

First the facts: On the heels of a thirty-day Palestinian suicide bombing campaign in Israeli cities which included thirteen deadly attacks (imagine thirteen 7/7’s in one month), Israel embarked on a military offensive in the West Bank.  The fiercest fighting in this offensive occurred in the refugee camp just outside the West Bank town of Jenin, the launching point for 30 Palestinian suicide bombers in the year and half previous (seven were caught before they could blow themselves up; the other 23 succeeded in carrying out their attacks).  In this battle, which lasted less than a week, 23 Israeli soldiers were killed as well as 52 Palestinians, of whom at most 14 were civilians (there is some marginal dispute about that last figure).

There was nothing extraordinary in this battle or in these numbers.  Looking back, what is extraordinary is that Ariel Sharon’s Israel sat through 18 months of Palestinian suicide terror before embarking on even this military offensive.  Seamus Milne assured readers on April 10 of the ‘futility’ of this military response, though with the benefit of hindsight we can clearly see this battle as the turning point in the struggle to end suicide terror on Israel’s streets.  Milne referred to ‘hundreds’ killed, ‘evidence of atrocities,’ and ‘state terror.’  Not to be outdone, Suzanne Goldenberg reported from Jenin’s ‘lunar landscape’ of ‘a silent wasteland, permeated with the stench of rotting corpses and cordite.’  She found ‘convincing accounts’ of summary executions, though let’s be honest and concede that it’s not generally difficult to convinceGoldenberg of Israeli villainy.  In the next day’s report from Jenin, a frustrated Goldenberg reported that the morgue in Jenin had ‘just 16 bodies’ after ‘only two bodies [were] plucked from the wreckage.’  This didn’t cause her to doubt for a moment that there were hundreds more buried beneath or to hesitate in reporting from a Palestinian source that bodies may have been transported ‘to a special zone in Israel.’  Brian Whitaker and Chris McGreal weighed in with their own equally tendentious and equally flawed reporting the following week.

Read the rest of the essay here.