The Guardian’s coverage of Israel’s administrative detention of a Palestinian “baker” (who, in his spare time, found time to ‘volunteer’ for Palestinian Islamic Jihad) named Khader Adnan was as one-sided as it was obsessive.  They published  five separate pieces (over a ten-day period) sympathetic to a terrorist (who went on a hunger strike to protest his detention) held due to his involvement in a movement responsible for terror attacks claiming over 200 Israeli lives since the 1990s.

(The “baker” can be seen in this video imploring his fellow Palestinians to carry out more suicide attacks against Israelis.) 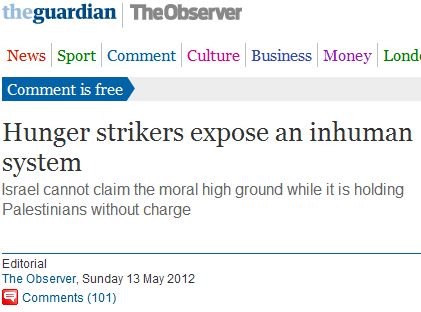 “The disclosure that six of almost 1,600 Palestinian prisoners on hunger strike to protest against the Israeli policy of “administrative detention” are close to death has profound implications for Israel and for the stalled Middle East peace process. The rule of law and fair and proper judicial processes, where those accused of a crime may be charged and are guaranteed an opportunity to speak in their own defence in open court, is a key human right that a properly functioning democracy should guarantee even in a troubled period of peacetime.”

Vital context ignored by the editorial includes the fact that administrative detention is a practice inspired by the recognition that the criminal law’s reliance on strict rules of evidence are not suited to handle the challenges presented by terrorism.  The reasoning behind administrative detention often is based upon fear that the suspect is likely to pose a threat in the near future. So, it is meant to be preventive in nature rather than punitive.

The administrative detention practice used to imprison Adnan is a judicial method similarly employed by other democratic states around the world, including the the EU, UK – and the U.S.

In fact, Israeli detainees are allowed judicial review, generally within eight days, while in the UK the length of time (which was 28 days until 2011) is now two weeks. The U.S. can hold terror suspects indefinitely.

A U.S. Homeland Security Affairs report concluded that (for these and other reasons) Israel’s use of administrative detention is more respectful of prisoners’ rights than in the U.S. and Britain.

Further, while Israel uses administrative detention purely to prevent acts of terror against its citizens, many countries in the EU use this type of detention for asylum seekers and illegal immigrants.

“Indeed, according to the UN’s special rapporteur on Palestinian human rights, over the past year the number of administrative detentions has almost doubled despite the period of relative peace in Israel.”

Much like Harriet Sherwood’s false claims that rockets have only “sporadically” been fired into Israel (when, actually, 627 deadly projectiles were fired at Israeli towns in 2011 alone), the notion that Israel has “relative peace” is profoundly misleading.

“There is an evident risk of violence for both Israelis and Palestinians should any of the hunger strikers die.”

And, there is a much greater risk that Israeli civilians will die if the Palestinian terrorists are released, a humanitarian concern the author of this polemic clearly did not consider.

The Observer editorial continues by issuing a further warning to Israel on why they must give in to the terrorists’ demands.

“At a time when more and more observers are increasingly convinced that the two-state solution is failing, the nonviolence of this hunger strike is already deeply suggestive of what a Palestinian civil rights movement might look like – should Palestinians abandon the demand for their own self-determination and, instead, insist on full equality within a binational state.”

I guess it was lost on the author that the only reason such prisoners affiliated with violent terrorist movements are behaving ‘non-violently’ is the fact that they’re incarcerated and unarmed.  Further, ignored in the passage is the fact that the overwhelming majority of the terror suspects subscribe to an ideology intrinsically opposed to mere “self-determination” and hostile to the existence of a Jewish state within any borders.

The “non-violent” Palestinian prisoners currently engaged in a hunger strike include the following suspects, who were re-arrested by Israeli authorities for continued terrorist activity after being released in the Shalit deal:

Abbas al-Sayyid – Senior activist in Hamas.  He was sentenced to 35 life sentences for his role in the terrorist attack in the Park Hotel terror attack in Netanya on Passover evening 2002 which killed 30.  After he was arrested, he confessed during questioning by the GSS (General Security Service) that he organized and led the terrorist attack, and even afterwards he sought two more explosive belts to commit additional attacks.  His arrest prevented a number of planned attacks on Israeli citizens.

Muhannad Shrim – Senior activist in Hamas and al-Sayyis’ assistant.  He was sentenced to 29 life sentences for his involvement in the deadly“Park Hotel” terrorist attack in 2002, which killed 30 and injured 160.  During questioning after he was arrested, he told police how he transported the terrorist bomber from his apartment before the attack.

Jamal al-Hor – Hamas activist who was sentenced to five life sentences forterrorist attacks and involvement in murder.  Among other things, he was involved in the planning of the attack at “Café Apropo” in Tel Aviv with other members of a terrorist cell he founded which came to be known as the “Tzurif squad”.  Three young women in their early 30’s were killed, one of whom was in her third month of pregnancy, and 48 others injured.

Wajdi Joda – Head of the ‘Democratic Front’ in the Nablus region.  Joda personally recruited the terrorist who committed the suicide attack at Geha interchange on December 25, 2003.  In the attack, four Israeli civilians were killed, among them three women and 21 injured, when the bomber blew himself up at a bus stop in the evening.

The subtext of the Observer editorial, suggesting that releasing dangerous terrorists from prison will help the ‘peace process’, is only exceeded in absurdity and cynicism by the Guardian Group’s evidently serious suggestion that they aren’t obsessively critical of the Jewish state.