So one would think that her Guardian report from Gaza focusing on social problems among Palestinians would at least touch upon the effects of life under an Islamist, despotic regime which denies its citizens democratic and human rights, and in particular upon the effect on women who suffer under what can at best be described as a government enforced culture of misogyny.

However, Robson (who was taken to Gaza by Oxfam) does not mention the word “Hamas” even once in her entire report (“Israeli blockade takes its toll on mental health in Gaza“, July 11th) – a fact even more remarkable in light of the fact that the strap line of the story cites the lack of freedom in the strip.

Robson, by use of unverifiable anecdotal evidence and questionable inferences, suggests a mental health crisis in Gaza totally of Israel’s making.

Typical are the opening passages, which recount the five-year unemployment by a Gazan named Abu Shawareb. Robson writes:

“Since the Israeli blockade of Gaza in June 2007, Shawareb has been unable to find another job. “We’ve been left to die slowly here,” he says. “I am just 40 but I feel as if my working life is over.”…He has been diagnosed with chronic depression and is on medication. The treatment is helping, but Shawareb still has days when he can barely pick himself up off the floor.”

So, by inference, the reader is to believe that Shawareb’s unemployment, and his depression, was caused by the blockade.

Leaving aside the fact that Robson completely ignores Hamas’s role in bringing about the blockade (the firing thousands of rockets into Israeli territory since they assumed power in 2006), the unemployment rate in Gaza in 2012 is 31.5% (per the pro-Palestinian NGO, Gisha) – a number considerably lower than it was during many quarters before the blockade.

In the first quarter of 2006, for instance (before the 2007 blockade), the unemployment rate in Gaza was nearly 40%. (See page 14 of this World Bank report.) Two years earlier, in 2004, the rate was 45%. While the unemployment rates fluctuated considerably in other quarters, there is no evidence of a statistical increase in unemployment as the result of Israel’s blockade on arms flowing into the strip.

“Stress-related and mental health disorders are on the increase in the Gaza Strip, according to a recent report by the UN Relief and Works Agency for Palestine refugees in the near east (UNRWA). A combination of internal and external influences – including forced displacement, dispossession and occupation – have exacerbated the already high rate of mental health problems.”

However, the report does not even attempt to demonstrate causation and provides no empirical evidence indicating that whatever increase in mental health disorders may exist are  indeed related to the blockade.

Robson then quotes an official from the Gaza Community Health Center, thus:

“Hasan Zeyada is a psychologist and manager of the Gaza Community Mental Health Programme. According to a study by the GCMHP, depression has increased by nearly 18% among Gazans since the blockade.”

A link to the GCMHP study is not included, so it is impossible to determine the veracity of the claim, or how they proved a correlation between the blockade and an 18% increase in depression.  However, it is important to note that GCMHP is an NGO with an extremely radical agenda.

Robson concludes with the following passage about spousal and child abuse in Gaza:

“According to a 2011 study by the Palestinian central bureau of statistics, 51% of married women had experienced violence from their husbands in the previous 12 months. Approximately 45% of children between 12 and 17 in Gaza have reported experiencing physical abuse at the hands of their parents.”

Are we to assume that the blockade causes Palestinian men to beat their wives and children?

Domestic violence in surrounding Arab countries would suggest that such abuse may be a product of Palestinian social mores, rather than any Israeli action.  In fact, within the Palestinian Authority, at present, there are no laws to protect women from domestic violence.  Further, honor killings of women have increased in recent years. (See reports on the abuse of women – including physical and sexual abuse, honor killings, and female genital mutilation – in other Arab countries, here, here and here.)

Indeed, completely missing from Robson’s report is any information on repression of Palestinian men, women and children in Gaza by the Hamas regime and the connection to systemic human rights violations in the territory may have with mental health disorders and other social problems.

For instance a summer camp for children, run by Hamas,  forces children to experience “first hand the daily lives of prisoners held in Israel”.  The camp guides explained that “the mock prison set up for the camp is divided into six rooms, each simulating the incarceration conditions of Palestinian prisoners”. The first room is an interrogation cell, which is where prisoners are first led once entering the prison.

“One of the main heroes of the camp is Ibrahim Hamed, who was the head of Hamas’ military wing in Ramallah and is responsible for murdering dozens of Israelis. The guides boastfully tell the children how Hamed, who was recently sentenced to 54 life sentences, has continually refused to give his interrogators any information, including his given name.

Ahmad Rantisi, one of the organizers of the summer camp, said that its goal is to allow children to get a tangible experience of the suffering of Palestinian prisoners, and strengthen their belief in the protection of Palestinian land and the high price that must be paid.

In addition to the mock prison, the children participate in different activities, including military training, religious studies and walking on boards with rusty nails and knife blades.” 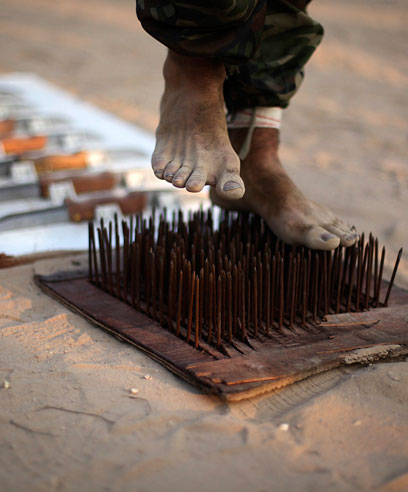 Such abuse of Palestinian children, which certainly could explain some of the social problems in the strip, would likely never be reported by the Guardian.

Further, it is stunning that a report on the mental health “crisis” in Gaza would ignore the supremely relevant factor of the Hamas regime’s systemic abrogation of Palestinian human rights.

Robson’s piece is thoroughly consistent with Guardian reports about life in Gaza – ignoring the fact that Israel’s legal blockade was necessitated by Hamas’ decision to prioritize firing rockets at Israel (and launching cross border terror attacks), over the more mundane tasks of social and economic development.

The view of Palestinians – even those possessing the most extreme, violent and reactionary values – as perpetual victims of Israeli oppression is so ingrained in Guardian Left thought – and such an article of faith – that competing narratives regarding the “root causes” of Palestinian suffering are rarely – if ever – considered.

At the Guardian, Israel’s villainy is predetermined, and simply immutable.