The Guardian’s Jonathan Freedland wrote a superb essay for ‘Comment is Free’ on Oct. 19 titled “We condemn Israel. So, why the silence on Syria?“.

“Nearly four years ago Israel launched Operation Cast Lead, designed to halt Hamas rocket fire from Gaza. It resulted in some 1,400 Palestinian deaths. For nearly a month that story was never off the front page, and it often led the TV news, here and around the world. There were large and loud public demonstrations. The DEC set up a fund and sought to air a televised appeal, famously refused by the BBC.

There is no such clamour now. The Stop the War Coalition is not summoning thousands to central London to demand an end to the fighting, as it did then. On the contrary, its statements are content simply to oppose western intervention – of which there is next to no prospect – while politely refusing to condemn Assad’s war on his own people. Caryl Churchill has not written a new play, Seven Syrian Children, exploring the curious mindset of the Alawite people that makes them capable of such horrors, the way she rushed to the stage to probe the Jewish psyche in 2009. The slaughter in Syria has similarly failed to move the poet Tom Paulin to pick up his pen. Apparently, these Syrian deaths are not worthy of artistic note.”

Freedland’s argument is unassailable, and represents a welcome dose of polemical sanity at a media group mired in a culture of obsessive anti-Zionism.

However, also of note was Freedland’s critical reference to the Irish “poet” Tom Paulin.

Freedland links to a vile poem written by Paulin in response to the Al-Durah incident, on Sept. 30, 2000, titled “Killed in Crossfire.” (See a good summary of the Al-Durah hoax here.)

First, for some background, here’s a brief collection of quotes by Paulin, courtesy of CAMERA:

On the validity and existence of the Jewish state:

“I never believed that Israel had the right to exist at all.”

“It is an artificial state.”

“The Palestinians need good anti-tank weapons. They have got to meet force with force. They have to be cunning and forceful.”

“I can understand how suicide bombers feel. It is an expression of deep injustice and tragedy. I think — though — that it is better to resort to conventional guerrilla warfare. I think attacks on civilians in fact boost morale. Hitler bombed London into submission but in fact it created a sense of national solidarity.”

“[Brooklyn-born Jewish settlers] should be shot dead. I think they are Nazis, racists, I feel nothing but hatred for them.”

The particular poetical smear by Paulin which Freedland linked to in his recent essay explicitly compared Zionism with Nazism.

However, even more noteworthy was the site where the poem appeared in 2001.

If you follow Freedland’s link it takes you to the following British newspaper. 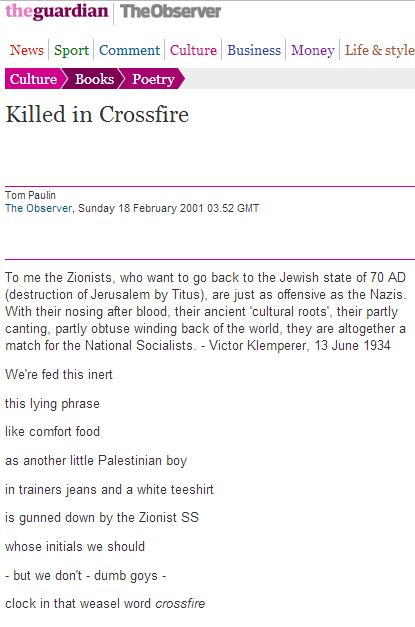 Interestingly, these days, reader comments below the line at ‘Comment is Free’ which accuse Zionists of being Nazis will typically be deleted by CiF moderators, as such insidious antisemitic defamations are deemed inconsistent with the Guardian’s “community standards”.

Evidently, in years prior, such ‘observations’ were not only judged to be morally acceptable by Guardian editors, but worthy of cultural merit.