Beginning on Tuesday night, Oct. 24, Hamas and other terrorists in Gaza launched over 70 rockets into Israel. Two workers were injured severely when a rocket hit a farm near Kissufim, and three other civilians were lightly injured. (Several buildings were also extensively damaged by the attacks.)

Here’s a partial record of the attacks.

21:30: In another two hours, this number rose to six rockets, all in Eshkol Regional Council.

22:30: Israel Air Force aircraft successfully targeted a rocket launch squad in Gaza which was in its final stages of preparation to fire rockets.

07:00:  A barrage of 40 rockets was fired from Gaza, striking communities in southern Israel. Two farm workers were critically wounded and evacuated to a nearby hospital.

09:20: As of this time, over 65 rockets were fired from Gaza into southern Israel today. The Iron Dome system intercepted seven rockets aimed at major Israeli cities.

16:05 Another rocket hit Hof Ashkelon Regional Council, making the rocket count 73. Throughout the day, injured Palestinians were transferred from the Gaza Strip to Israel for medical treatment.

The following Guardian photo, was posted at 12:15 on Wednesday – at the time representing the Guardian’s only report devoted to the rocket barrage – as part of thein the Guardian’s daily ‘Picture Desk Live‘ series.  It was posted after news of the three injured workers in Israel had already been reported. 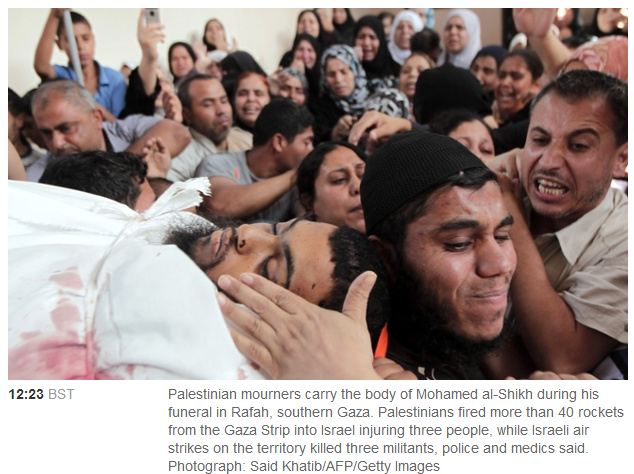 The caption of Palestinians grieving over body of al-Shikh fails to note that, according to AFP, the Popular Resistance Committees (PRC) acknowledged that Al-Sheikh was indeed a PRC operative.  Additionally, al-Shikh was reportedly “engaged in firing rockets into Israeli territory at the time of his death.”

Later, Harriet Sherwood reported on the rocket attack, in a post titled ‘Gaza-Israel shelling resumes after departure of Qatari emir‘, Oct. 24, which began with the following passages:

“More than 70 rockets have been fired into southern Israel from Gazasince the departure on Tuesday of the emir of Qatar, whose visit to the Gaza Strip was seen as a boost for its ruling faction, Hamas. Three foreign agricultural workers were injured and several buildings were hit.

Four militants were killed in resurgent Israeli air strikes overnight as a short period of calm ended. Three were members of Hamas’s military wing, the Ezzedin al-Qassam brigades, according to reports on its website.”

Hamas, which normally distances itself from rocket fire from Gaza, has claimed responsibility for some operations in recent days. [emphasis added]

Hamas is also under pressure from more radical organisations within Gaza, which may explain its unusual open participation in this latest round of violence. “Hamas feels a tension between the need to be a government [in Gaza] and the need to be part of the resistance [to Israel].

Sherwood’s claims are extremely misleading, if not outright false.

As with the AFP story cited above, many news reports have cited PRC as one of the parties responsible for the latest barrage of rockets into Israel. Indeed Hamas and PRC claimed joint responsibility for the attacks.

More importantly, Popular Resistance Committees, a small terrorist organization with “extensive operational capabilities”, is largely controlled, financed, and trained by Hamas. In fact several years ago it split into three factions, “two of which collaborate with Hamas and in effect operate under its aegis.”

According to the IDF, Hamas uses PRC as a means of continuing “resistance” against Israel “while being able to claim that it is not involved in the PRC’s terrorist activities.” (Since their founding in 2000, PRC attacks have been responsible for the murder of at least 10 Israelis).

“Even when Hamas has not been officially engaged in terror attacks or the firing of rockets itself, it has turned a blind eye to such activities by other groups and largely made no attempt to prevent them. As de facto ruler of the Gaza Strip, it has also done nothing to prevent the flow of arms to various factions within the territory.

In June 2012, some 80 rockets were fired into Israel from the Gaza Strip over a four-day period, with Hamas taking responsibility for the attacks.”

So, Sherwood’s claim in her recent report, that “Hamas…normally distances itself from rocket fire from Gaza”, is simply not true.

Hamas may have developed a certain pragmatism, motivated by the desire to survive, by contracting out much of their terror activities to other groups, thus allowing for a degree of plausible deniability when attacks are launched from the territory they control.

But, such a nakedly deceptive strategy, of course, requires the acquiescence of those in the media who would accept Hamas’s claims at face value.

In Harriet Sherwood, Hamas has found such a dupe.