A Sept. 10 edition of the Guardian’s ‘Picture Desk Live: the best news pictures of the day’ included the following photo of six Palestinians “inspecting” a destroyed building in Gaza:

Palestinians inspect the damage to a building after an Israeli air strike in Nuseirat refugee camp in the central Gaza Strip. Photograph: Ibraheem Abu Mustafa/Reuters

The caption failed to mention the attack against Israel which precipitated the IDF operation – a grad rocket launched from Gaza that morning which destroyed a house in Netivot and injured several Israelis – nor that the building in Nuseirat was reportedly a weapons manufacturing facility. 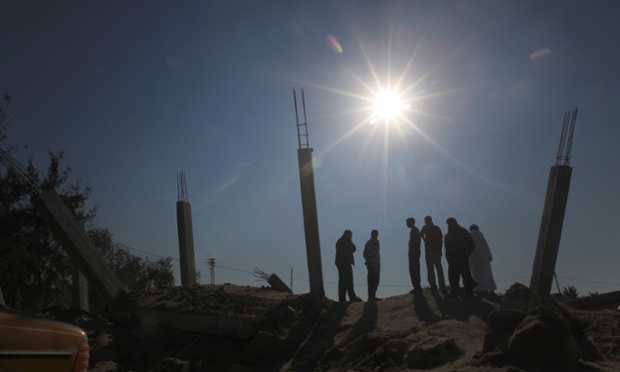 Palestinians inspect the damage to a building following an Israeli attack in al-Bureij, in the centre of the Gaza Strip. Photograph: Mahmud Hams/AFP/Getty Images

Guardian readers would be forgiven for not knowing that the IDF operation was a response to several grad rockets which were fired into southern Israel by Popular Resistance Committee terrorists on Oct. 28.

This latest Palestinian attack followed a barrage of more than 70 rockets fired into Israel by Hamas and Popular Resistance Committees on Oct. 24 and 25 which seriously damaged homes and critically wounded two foreign workers in the Eshkol Region.

Like Loading...
Tags from the story
Guardian, Israel Defense Forces, Popular Resistance Committee, Terrorism, Uncategorized
Written By
Adam Levick
More from Adam Levick
Those who get their news from the mainstream media (or the Guardian) could...
Read More