On Sept. 12, Tamar Sternthal (director of the Israel office for CAMERA) reported on the dangerous use of children by Palestinian protesters to score political points, in ‘Cheap Shots: Palestinians put kids in the line of fire‘.

“There’s nothing like a photograph of an innocent child caught up in military conflict to elicit sympathy, rage, and at times, international intervention.

On a media stage far away from Hollywood, in the West Bank village of Nabi Saleh, where photographers gather every Friday to document repetitious scenes of Palestinian residents and international activists clashing with Israeli soldiers, Palestinian activists are placing their children in ever-more-visible roles. Unlike scenes in “Wag the Dog,” a black comedy, there’s nothing funny about parents exploiting their own children to score propaganda points in the Israeli-Palestinian conflict.

Unfortunately, that’s just what happened on Friday, August 24, when A’hd Tamimi, and her cousin Marah Tamimi, both 11, were photographed by Agence France-Presse tearfully being restrained by Israeli soldiers.

Days later, photos of the distraught girls appeared in Australia’s Fairfax media outlets alongside a Page-1 article charging the Israeli army with the routine abuse of Palestinian children. “An Israeli soldier restrains a Palestinian girl crying over the arrest of her mother during a protest over land confiscation in al-Nabi Saleh,” stated one caption in the Age and the Sydney Morning Herald.

Slamming the article’s “unnamed sources, hearsay and propaganda,” Philip Chester, president of the Zionist Federation of Australia, also charged that the Palestinian leadership “blatantly use[s] children” and “presents a fable where Israel’s curtailing of violence is tantamount to abuse of children.”

Chester was not specifically addressing the photographs of the appealing young Tamimi girls under the thumb of the Israeli military, but he may as well have been.

A’hd is the daughter of Narimen and Bassem, prominent activists in the Popular Resistance, and Marah’s father is Naji, another leader in the weekly demonstrations.

In other words, the girls’ parents are among those who determine the protests’ strategies. Rather than keeping their children at a safe distance from the often-violent clashes, the parents encouraged their children to play highly visible roles in the confrontation with the army.

Narimen is a participant in B’Tselem’s video project, in which the prominent Israeli NGO distributes video cameras to Palestinians to “present the reality of their lives to the Israeli and the international public.”

This is not the first time she has exploited children and distorted reality. In a 2011 video of the arrest of an 11-year-old stone-thrower, Narimen filmed as a Palestinian man instructed the boy’s mother not to join him on the police vehicle, even while Israeli authorities repeatedly asked her to board the van. Later media reports falsely claimed that the Israeli police forbade his parents from accompanying him.

Despite complaints about her cynical exploitation of Palestinian children in order to produce anti-Israel propaganda, Narimen has not stopped using children as props. To the contrary, she has since enlisted her own daughter.

In a 16-minute video posted on the Nabi Saleh Solidarity blog, the two girls can be seen leading a crowd marching toward a spring that the army has deemed off-limits. A’hd and Marah are filmed at length, cursing the soldiers and trying to get around them. Marah can be seen running some distance to approach and confront soldiers. And when Narimen and two other women are arrested, the girls refuse to let go, interfering with the arrests. An army spokesman later said that the detainees, who were held for a few hours, had been throwing rocks.”

Here’s a screen capture from the video.

But, that isn’t all.

Here’s Marah and A’hd with PA President Mahmoud Abbas getting official recognition for her ‘bravery’ at the August 24 incident. 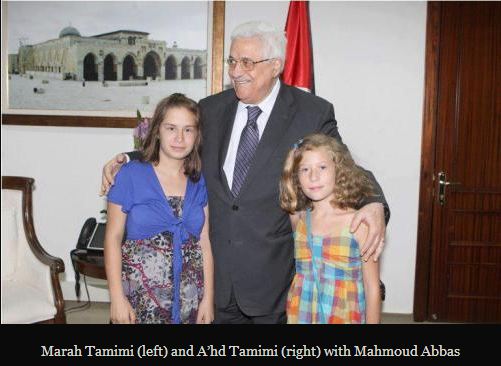 Here’s another photo of the event:

The site where the photo was published, Nabi Selah Solidarity, added the following:

But, the exploitation of the two girls has not ended.

“A video shot at a Friday protest in the village of Nabi Salih, in the central West Bank, captured a striking image: that of a young Palestinian girl [A’hd Tamimi] attempting to provoke Israeli soldiers. Soon thereafter the girl is joined by many other seemingly young-looking people from the village.

A senior IDF source told Ynet that intelligence indicates that pro-Palestinian activists pay Palestinian children from Nabi Salih and other nearby villages to confront the soldiers. “The soldiers are briefed on the fact that these protests are staged for the sake of provocation, so that they could be filmed acting violently and so that those videos could be distributed worldwide in an effort to harm the IDF’s image,” the officer said.

According to Ynet, Abir Kubati, spokesperson of the popular protest coordination committee, said: “I don’t understand what the army wants – they send soldiers into a Palestinian village and then dare to depict themselves as victims because the residents don’t welcome them.”

“You’re a traitor! I know you speak Arabic. Our soldiers are stronger than you! I’ll smash your head,” the 10-year-old girl is heard in the video screaming at the soldier in Arabic, according to a translation provided by Ynet.”

However,  such provocations by the Tamimis pale in comparison to an antisemitic Palestinian political culture which consistently sends messages to their youth that martyrdom – dying, or even murdering Israeli Jews, to advance the Palestinian cause – is one of the most important political values they should aspire to.

Here are a few clips of chilling child abuse, routinely sanctioned by Palestinian society, which the Guardian won’t report.