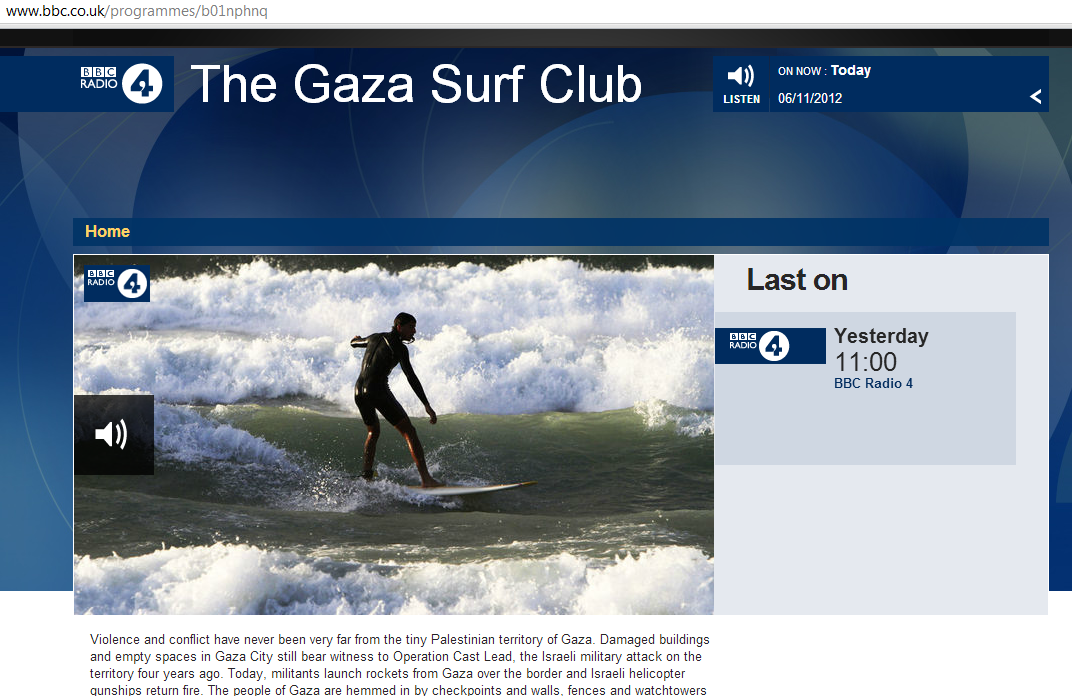 The Radio Times also categorized the programme as a “documentary”.

A documentary, however, is defined as “a film or television or radio programme that provides a factual report on a particular subject”. Factual reports must – by definition – include the objective presentation of facts, including the inconvenient ones; otherwise the report becomes editorialized and ceases to be a documentary.  That is precisely what appears to have happened to Jeremy Grange’s programme from Gaza, recorded in July of this year.

Readers will get the gist by taking a look at the programme’s synopsis, but the radio broadcast itself (available for listening here for a limited period of time) is even more egregious in its blatant attempt to paint a very specific picture in the minds of listeners.

“Thick walls and security fences divide it [the Gaza Strip] from Israel, yet despite the poverty and political tensions, a group of young Gazans are finding hope and a sense of freedom in an unexpected way…”

So begins the introduction to the programme, which goes to great lengths to play up existing stereotypes of the Gaza Strip, for example by referring to “donkey carts” and “horse-drawn carriages” in the streets and on the beach which – while they undoubtedly exist – are far from being the only methods of transport used in the Gaza Strip.

A significant proportion of the broadcast is narrated by the founder of the Gaza Surf Club, Matthew Olsen of ‘Explore Corps‘. Whilst making much of the restrictions on fishing along the Gaza coast, neither Olsen nor the programme’s producer bother to explain why those restrictions are necessary.

“We can’t leave Gaza by the sea or by the land” says one of the local interviewees, adding “I am under 40 years old so I can’t travel to Egypt even. I need the special coordination from the Egyptians. People’s life [sic] in a real prison.”

Indeed, since the renewed opening of the Egypt-Gaza border in 2011, men between 18 and 40 do need a visa to travel to Egypt, unlike the rest of the population which can cross the frontier freely. The programme’s producer does not apparently think it necessary to point out that many countries throughout the world demand that those wishing to travel to them apply for a visa first, or that the age and gender limitations imposed by Egypt might have something to do with the proliferation of terrorist groups in the Gaza Strip.

As for passage into Israel; looking just at the week during which Jeremy Grange was in Gaza, we see that 309 Gazans made the journey.  During June 2012 alone, 1,359 businessmen exited the Gaza Strip. In July 2012, a delegation of young musicians travelled from Gaza to a summer camp near Ramallah and a group of handicapped sportsmen attended a camp in Hebron.

Despite that, the programme’s next interviewee repeats the same meme unchallenged:

“Gaza is surrounded by three walls and the sea from the north [sic] so there is no way to escape, to enter Israel or to leave abroad.”

He goes on to say that:

“People are poor, so they can just afford the minimum requirements of life which means that they cannot travel. There are no public parks. The only place that people can go for a free [sic] is the beach.”

Whilst that statement may well reflect the situation of some of Gaza’s population, it is obviously not accurate across the board, as the programme tries to imply. Gaza does have shopping malls, an equestrian club, water parks (although masked men did burn one down for allowing men and women to mix), nice hotels and restaurants, an Olympic-size swimming pool and other facilities. The sale of the iPhone 5 is going strong and there are even millionaires in the Strip. A documentary would have mentioned those facts too.

But the propaganda continues:

There is also no explanation that Hamas chose to stop buying fuel for its power plants from Israel at the beginning of 2011, thereby initiating an energy crisis.

Matthew Olsen then takes up the narrative again, with references to a “big security fence”, “tanks” and “Israeli patrol boats” which are left entirely context-free. Similarly, another interviewee refers to a time when “the border was more open”, with no explanation of the fact that restrictions were the result of the second Intifada terror war.

The report continues by interviewing ‘Surfing for Peace’ co-founder Arthur Rashkovan and Dorian Paskowitz.  Rashkovan tells of their journey to Gaza with donated surfboards, including a graphic description of the Erez Crossing – with no mention of why such heavy security measures might be necessary.

Now, that makes a great sound bite, but of course Israel’s problem is not with the surfers in Gaza, but with the numerous terrorist militias which make the stringent security measures and arms smuggling prevention necessary. Until this point in the programme, listeners would hardly be aware of those issues however, having been fed a monotone repertoire of poor, entrapped Palestinians and seemingly reasonless Israeli military might.

But Olsen and Grange do not only sell Israel short in this programme. Towards its end, Olsen describes how women go swimming fully clothed, creating a safety problem due to their heavy garments weighing them down in the current. Why women have to swim in that manner is not made clear. Neither does he fully explain why the female surfer interviewed and her friend should have to “come out early in the morning because they don’t want to make a spectacle of themselves” or why “the idea of women surfing is problematic here”. Instead, he sums up with “I don’t anticipate that they’re going to keep surfing past the age of 16 -17”.

Olsen does make a brief, context-free reference to air-strikes and rockets fired into Israel by “militant groups” (in that order), and then in an equally taciturn manner informs listeners that “the Hamas government banned all peace-making initiatives across the border”, failing to expand further. So after 24 minutes of a 29 minute report, listeners are suddenly presented with a snippet of information which suggests that the Gaza Surf Club’s problems may have a domestic aspect to them too, although that subject fails to get any further attention.

The radio broadcast’s synopsis states that:

“The programme gives a fresh perspective on the issues which beset this troubled territory and shows how a community has overcome divisions and tensions.”

In fact it does nothing of the sort. The subject matter itself has been the focus of numerous previous articles both on the BBC and in other media outlets. The stereotypes are well-worn and the myths have been promoted a thousand times before.  Little or no context, background or new information is given, the subject of Hamas restrictions on women is glossed over and the producer apparently never thought to ask himself why he heard visions of Palestinian and Israeli surfers engaged in joint projects from one side only.