On November 6th 2012, a Turkish court began its show trial of four former commanders of the Israeli security forces – in absentia – for their supposed role in the Mavi Marmara incident of May 2010.

As was pointed out by a representative from the MFA:

“The so-called accused were not even informed or served or notified that they were going to be charged, which makes this one big puppet show”

That fact is not reported in the BBC’s account of the opening of the obviously politically motivated trial, the eventual outcome of which is predictable to say the least.  In fact, the BBC article on the subject lends entirely unwarranted gravity and legitimacy to the proceedings.

The BBC article also fails to relate in any way whatsoever to the antisemitic spectacle which went on outside the court on the first day of the ‘trial’ and which was obviously tolerated – if not encouraged – by the Turkish authorities.

Under the EUMC Working Definition of antisemitism, one of its manifestations is:

“Drawing comparisons of contemporary Israeli policy to that of the Nazis” 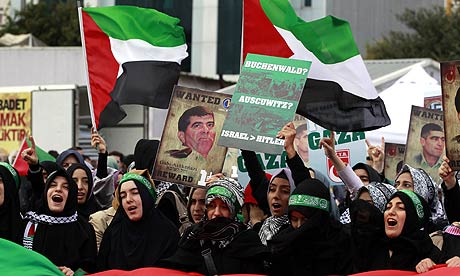 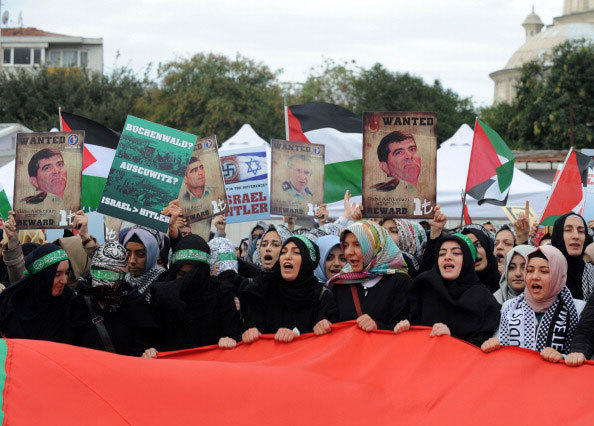 In addition, the BBC fails to mention the involvement of the body which co-organised the 2010 flotilla (among others) – the terror connected Turkish organisation Insani Yardim Vakfi, also known as the IHH, and fails to inform its readers of the close connections between that organisation and the Turkish government, its long history of anti-Israel incitement and the anti-Semitic conspiracy theories for which its leader has quite a penchant.

According to this report and others:

“Several hundred people, many wearing the Arab keffiyeh headscarf around their necks adorned with the Turkish and Palestinian flags, crowded outside the courthouse as witnesses and relatives of those killed in the raid began to arrive.

“Murderer Israel, get out of Palestine!” the crowd chanted as others held up a banner with the words: “What is the difference? Hitler = Israel.”

On a board erected outside the courthouse by IHH, the Islamic humanitarian agency that owns the Mavi Marmara, protesters scribbled the slogans: “Israel, your end is near”, “Down with Israel”, “The revenge of our martyrs will be bitter”.”

The IHH vice president, Huseiyn Oruc, himself a passenger on the Mavi Marmara and among the organisers of the 2011 flotilla and the 2012 ‘Global March to Jerusalem‘  has been giving interviews on the subject of the ‘trial’. According to him:

” “Turkey is the first country in the world that will take the unlawful Israeli actions to court.” He further called the trial “a very significant case because today will mark the day that the untouchable image of Israel will be damaged.”

“Referring to the case pending at the International Criminal Court upon the request of the United Nations Human Rights Council (UNHCR) September 2010 report, which described Israel’s actions as “crimes against humanity,” Oruç claims that Israel “has been putting political pressure on the international courts” and the international community is waiting for the outcome of the trial in Turkey.” “

The political nature of the trial is further highlighted by the report that:

“…the Organization of Islamic Cooperation (OIC) and a parliamentarian from France’s Greens Party will send observers to İstanbul and a group of orphans from Gaza will also be at the court.”

But the antisemitism on the streets of Istanbul is not the only manifestation of anti-Jewish racism to be airbrushed out of the information provided by the BBC on this ‘trial’. Below the article appear links to additional background reading and information.

In the name of accuracy and impartiality, it would of course be proper for the BBC to update its anodyne profile of the Free Gaza Movement to include the recent display of blatant antisemitism by its leader Greta Berlin, who is quoted in the BBC profile. So far – over a month after the incident – that has not been done.

One cannot, it is to be hoped, imagine the BBC ignoring public displays of homophobia or racism against people of colour outside an obviously politically motived show trial enabled and promoted by a group which campaigned against gays or black people, even if that group did insert the words ‘human rights’ into its title.

It is precisely this sort of display of double standards which tarnishes the BBC’s reputation.