November 9th saw the appearance of a narrated slide-show entitled “Olive harvesting in the West Bank” on the BBC News website. 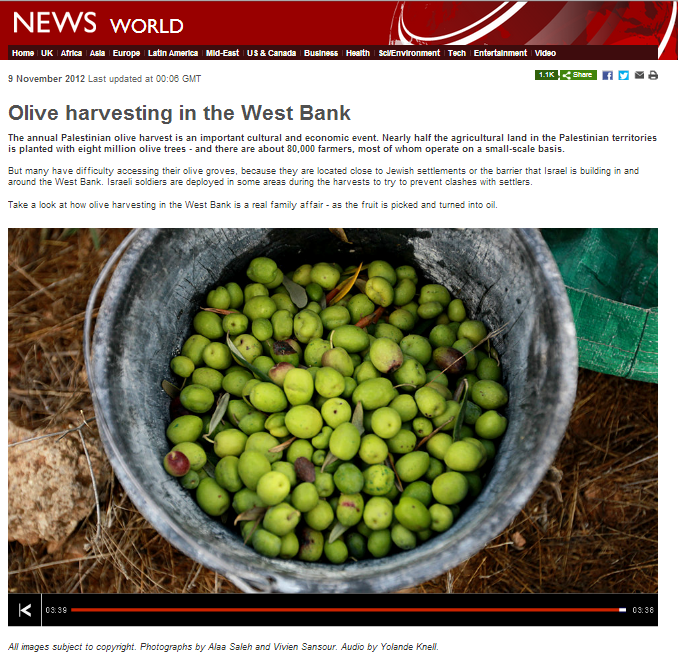 The BBC Jerusalem Bureau’s Yolande Knell is credited with the audio and some of the photographs and the narration were done by Vivien Sansour.

And narration it is – rather than reporting. Listeners will hear Sansour state (unchallenged) that:

“Many farmers in Palestine have a really hard time accessing their trees, mostly because of the expansion of Jewish settlements in the West Bank even has resulted in the confiscation of their lands by the Israeli military.”

“You notice that the army comes to basically provide what is supposed to be protection because the settlers when they see the people going to harvest their trees, they go and try to attack the families.”

One wonders if such stereotypical accusatory blanket statements about any other group of people would not have ended up on the floor of the cutting room. But the BBC, it seems, has decided to allow Sansour free rein to make whatever context-free and inaccurate generalisations she likes.

“From his land you can also see a small settlement expanding slowly into the village – his village of Jaba’a.”

Vivien Sansour’s rather economical introduction of herself towards the beginning of the slide-show does nothing to inform readers of her political motives for taking part in it. Sansour is Media and Promotions Manager for Canaan Fair Trade in Jenin, which somewhat ironically advertises its products as being “Delicacies from Palestine, the Land of Milk and Honey”.

Sansour is a promoter of “agriculture as a form of resistance”, and if you are wondering what that may mean, she was recently kind enough to explain:

“More than a romantic idea, Palestinians’ cultivation of their land contains the seeds of resistance. Her large-scale photos enable the viewer to walk the fields, experiencing the relationship of farmer to land, seeing how the traditional ways of planting and harvesting, of cooking the old recipes, form an historical continuum, the fruits of their labors feeding the body and the soul of Palestine today.

Sansour wants her work to emphasize the fact that “Palestinian farmers have always been there, they have always been part of the landscape, not an imposed or artificially created presence.” This continuum of presence is what she terms “agro-resistance.” “

So it is hardly surprising that Sansour and her BBC enablers would ignore the long and ancient history of Jewish cultivation of olives in the region or that modern-day Jews – who also grow and harvest olives, by the way – would be presented solely in terms of a ‘foreign body’: usurpers in an idealised pastoral Palestinian landscape.

Neither too should we be surprised that the presentation’s synopsis refers to “the barrier that Israel is building in and around the West Bank” without explaining the reasons for the anti-terrorist fence’s construction or that it is rather grudgingly acknowledged that “Israeli soldiers are deployed in some areas during the harvests” but without making clear the extraordinary lengths gone to by the IDF to ensure a peaceful harvest season for Jews and Arabs alike.

But one does have to hand it to Sansour that she is an expert in knowing which buttons to push with her Western audiences through the use of specific images, buzz-words and phrases. Looking at some of her other work too, it is obvious that this is a clearly thought-out strategy which aims to place Palestinians within the niche of the ‘authentic’, ‘back to the land’ style of alternative culture regarded by some in the West as ‘sustainable’ and often fostering a particular kind of political activism.

“The culture is obviously built around the environment”

“Most presses in Palestine operate in a cooperative way”

“As the whole world is trying to get back to organic”

Once again the BBC has cooperated with the promotion of political propaganda disguised as ‘fact’ by interested parties, without giving  full disclosure about their motives and affiliations.

Like Loading...
Tags from the story
BBC, Uncategorized
Written By
Hadar Sela
More from Hadar Sela
A dramatic headline appearing on the Middle East page of the BBC...
Read More

0 replies on “BBC serves up political propaganda with olives”