Over the past five days since Operation ‘Pillar of Cloud’ began, the BBC has – perhaps inadvertently – done an excellent job of documenting Hamas’ cynical exploitation of the local civilian population in the Gaza Strip as human shields.

Not only have we seen plenty of filmed footage of military grade missiles being fired from built up residential areas (as shown in the clip below), but the BBC journalists on the ground have reported via Twitter an almost constant stream of rockets being fired from their vicinity. 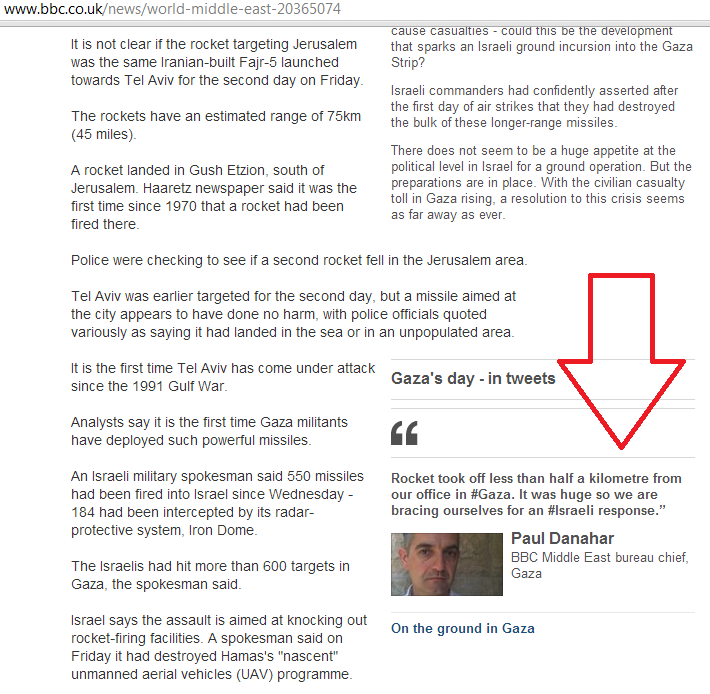 At around 3 a.m. local time on November 18th, the various BBC reporters in Gaza began Tweeting reports of an Israeli strike on a building which houses the Hamas television station ‘Al Quds’. 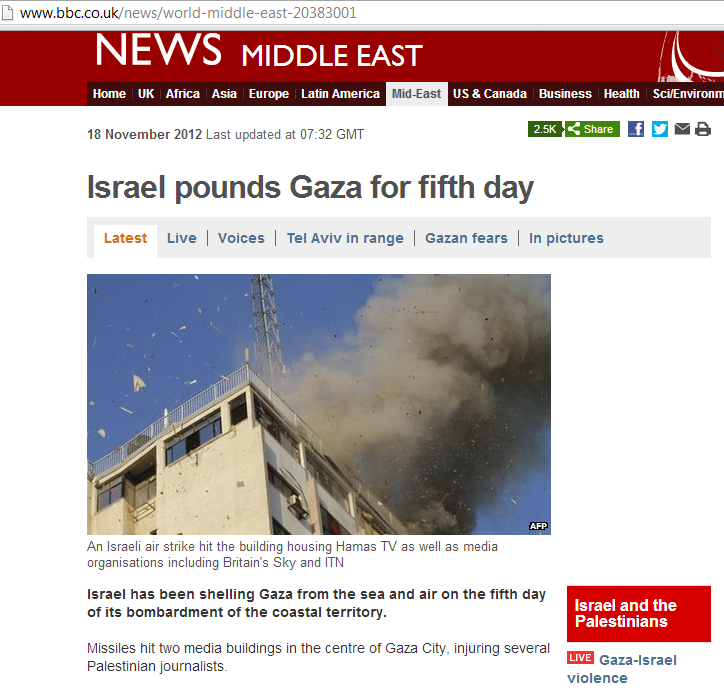 So what are ‘Al Quds TV’ and ‘Al Aqsa TV’? The latter was established in 2006 after the Hamas coup in the Gaza Strip and models itself on Hizballah’s ‘Al Manar’ TV station. It broadcasts virulently antisemitic material (so much so that it was taken off the air by the French government for violating European law against the broadcasting of incitement) and regularly promotes violence against Israelis and Jews – including to children.

Readers are no doubt familiar with the Mickey Mouse-style character ‘Farfour‘ – a creation of Al Aqsa TV under the direction of Fathi Hamad, who is also Hamas Interior Minister, in charge of the Hamas Public Affairs Department and head of a ‘charity’ named Waad which in 2009 offered a $1.4 million bounty to any Israeli Arab abducting an IDF soldier.

In 2008 a speech by Fathi Hamad was aired on Al Aqsa TV, which included an admittance of the use of human shields by Hamas:

Al Quds TV – housed in the Showa Housari building in the Rimal neighbourhood of Gaza City – was established by Hamas in 2008 and is registered in London. The director of its Gaza office, Imad Efranji, is a member of the board of the Hamas-affiliated Palestinian Journalist’s faction. It therefore comes as no surprise to find Efranji spinning this morning’s incident as “a new crime against the media” in an all too transparent effort to recruit worldwide public opinion and sympathy.

What is surprising, however, is the apparent willingness of media outlets such as ITN, Sky and Al Arabiya to share premises with – and act as human shields for – the abhorrently racist propaganda arm of a terrorist organization. Al Arabiya in particular should probably have learned from its prior experience in 2009.

Not quite so surprising – but disappointing all the same – is the rush to condemn a strike on the infrastructure of the Hamas propaganda and communications arm as “targeting journalists”. Leading the charge is Paul Danahar – head of both the BBC’s Jerusalem Bureau and the Foreign Press Association in Israel, which – without waiting for clarification from the IDF – has already issued a statement on the subject.

(No journalists were killed, by the way.)

The accidental injury of journalists located in close proximity to terrorist facilities is of course just as regrettable as the injury to people of any other profession and none. However, four days after Israel specifically stated that it would target Hamas terrorist infrastructure and after warnings to non-combatants in the Gaza Strip to distance themselves from Hamas terrorists and their installations, sharing offices with the Hamas propaganda arm was inevitably not a good call.

What is particularly disturbing is that Paul Danahar and some of his colleagues appear to have convinced themselves that anyone with a camera and a microphone is a journalist – failing completely to address the exploitation of that title by terrorist organisations, the placing of rocket launching sites in close proximity to houses or office buildings or the use of journalists and other civilians as human shields, as he and his colleagues have been documenting for the past five days.

But Danahar’s outrage must also be viewed from an additional angle too. His colleague Jon Donnison tweeted the following after this morning’s incident:

That, of course, is not true. As the IDF later stated, the operation’s aim was to cripple Hamas communications and both buildings were being used as centres of communications for terrorist activity. 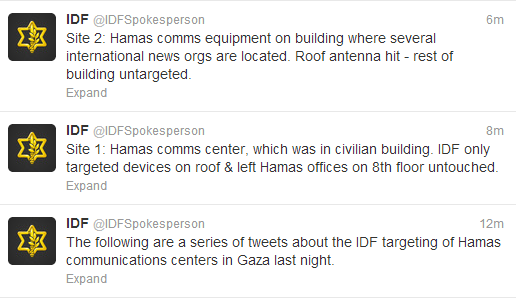 But when BBC journalists are indoctrinated by their senior editors and colleagues with the bizarre belief that Israel is out to kill them, as was documented here just a month ago, then objectivity, accuracy and impartiality are bound to be in short supply.

Here is the footage of the strikes on the antennae on the rooftops of the two buildings concerned: