One of the central themes promoted by some BBC journalists and editors during and after Operation ‘Pillar of Cloud’ was the notion that Israel deliberately targeted members of the media during the fighting.

Such claims were initially heavily promoted and publicised by the BBC Jerusalem Bureau head Paul Danahar – also head of the Foreign Press Association in Israel – following the IDF’s November 18th strike on two buildings in Gaza used by the Hamas-owned and run TV channels Al Quds TV and Al Aqsa TV. See our report from that date here.

But the promotion of that theme did not end there.

On November 19th the IDF targeted four senior members of the Palestinian Islamic Jihad  hiding in a ‘safe house’ on the second floor of an office block also used by international media companies operating in Gaza. The terrorists were:

Here is Ramez Najeeb Harb – in PIJ uniform – as he appears in a PIJ-produced announcement after his death.

The BBC’s reporters in Gaza, however, were quick to point the spotlight at the media-related aspect of the story – rather than the fact that the building was being used by terrorists – and that theme was widely reproduced on the BBC News website’s live updates page as well as on various BBC-related Twitter accounts.

Later, reference was also made to the fact that the target was PIJ-related, but with the emphasis on describing Ramez Harb as “head of media”.

But the indignation of BBC journalists did not stop there. On November 20th, these Tweets were sent:

The two men described as “journos” by Davies and a “media team” by Danahar were Mahmoud al Kumi and Hussam Salama of Hamas-owned (not ‘affiliated’, as Davies states) and operated Al Aqsa TV, which is designated as a terror entity by the US and banned by the French government for breaking EU law on incitement to hatred and violence and encouraging terrorism. Both men were acknowledged as Hamas operatives in the Hamas media.

Danahar apparently did not stop to ask himself whether he had ever been in a conflict in which so many media buildings were used by terrorists and so many journalists were co-opted as human shields.

On November 26rd, Danahar promoted via Twitter an article which appeared in the New York Times by David Carr.

Carr’s article has been the subject of much critique: see here, here, here and here, among others.

BBC employees are far from the only ones promoting the myth that ‘Israel targets the media’. Organisations such as ‘Reporters without Borders’ and the ‘Committee to Protect Journalists’ have also lent their voices to the promotion of the notion that members of terrorist organisations involved in media-related activities are ‘journalists’ – and therefore entitled to protection on a par with civilians.

This approach obviously ignores the fact that a member of a terrorist organization is precisely that – regardless of the exact nature of his practical activities. We do not, for example, classify terror financers as being primarily bankers nor do we describe the makers of explosives as first and foremost chemists. Especially ridiculous is the condescending manner in which members of the Western media elect to ignore statements made by the terror organisations themselves as to the use of the media for terror purposes.

“According to Hamas, “the importance of the media war in the struggle that takes place in Palestine does not go unnoticed by anyone….Our goal is to support the resistance, boost the morale of the resistance fighters who watch these media materials, and wage a psychological war against Zionists.” “

“Today … the camera is used as a weapon, along with the Kalashnikov, the rocket and the missile.”

Those Western journalists who voluntarily co-opt terrorists using the media as a method of warfare into their own ranks do a great disservice to – and ultimately compromise the safety of – legitimate journalists working in difficult circumstances in combat zones.

Journalists with real concern for the safety of their colleagues should, for example, be speaking out against practices such as the marking of vehicles with the letters ‘TV’ by terrorists such as Muhammed Riad al Shamaleh – the PIJ’s former head of training programmes and commander in the south Gaza Strip – in a bid to seek unwarranted immunity. 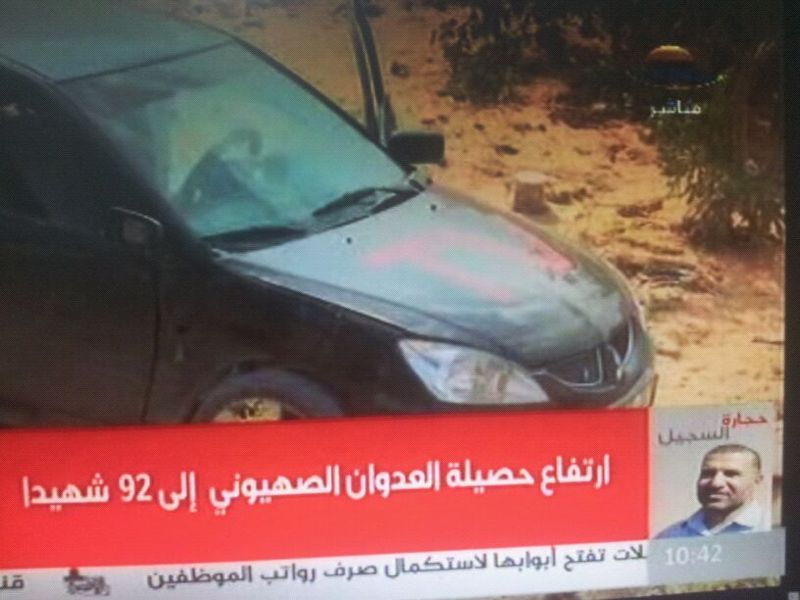 But by indiscriminately promoting the theme of ‘targeting the media’ whilst failing to make the necessary distinction between legitimate members of that profession and every member of a terrorist organization with a video camera, journalists also provide – intentionally or not – a protective mantle to terrorist organisations.

It is difficult to believe that the vast majority of the license-fee paying British public views such enabling of terror as benign.