On December 30th 2012 the BBC published an article in the Middle East section of its BBC News website entitled “Gaza construction convoy crosses from Egypt” and relating to the entry into the Gaza Strip via the Rafah crossing of truckloads of building materials donated by Qatar.

In the article it is stated: [emphasis added]

“A convoy of trucks carrying thousands of tonnes of supplies donated by the Gulf state of Qatar entered Gaza via the Rafah border crossing on Saturday.

Is the BBC really trying to suggest that up to now Egyptian policy on the subject of its border with the Gaza Strip was subject to Israeli dictates? That Egypt could not have permitted the entry of goods and persons through the Rafah crossing had it wished to do so? That the concerns of Egyptian governments – old and new – regarding domestic security have no effect upon Egypt’s policies concerning its border?

Or is that sentence in fact a reflection of the BBC’s overall approach to the Gaza Strip, which is to present the territory as being completely under Israeli control (despite the existence of a second border with Egypt) and still occupied – despite the fact that even Hamas says it is not?

The BBC’s profile of the Gaza Strip – last updated in January 2009: some three and a half years after the Israeli withdrawal – states: [emphasis added]

“The shape of the territory was defined by the Armistice Line following the creation of Israel in 1948 and the subsequent war between the Israeli and Arab armies.

Egypt administered the Strip for the next 19 years, but Israel captured it during the 1967 Arab-Israeli war and Gaza has been under Israeli control since then.

In 2005, Israel pulled out the troops occupying Gaza, along with thousands of Jews who had settled in the territory. As far as Israel was concerned that was the end of the occupation.

However, that has not been accepted internationally as Israel still exercises control over most of Gaza’s land borders, as well as its territorial waters and airspace. Egypt controls Gaza’s southern border.”

In line with its usual strategy, that BBC profile does not give any sources for its statements and so readers are unable to judge for themselves whether those individuals or organisations referred to in the phrase “has not been accepted internationally” are credible sources and whether their arguments have a legitimate – or even logical – basis.

In this article by Pnina Sharvit-Baruch – worth reading in full, along with this complementary and more detailed piece – an alternative view is presented.

“Israel’s imposition of control measures around the maritime area and airspace of Gaza are typical of situations involving armed conflict, and clearly do not enable Israel to exercise governmental powers on the ground vis-à-vis the local population, as would be required for the purposes of the law of belligerent occupation. The imposition of similar measures by the US and its allies in Iraq during the 1990s, in the FRY in 1999 or most recently in Libya, for example, was not considered as imposing upon those powers the status of belligerent occupier.

Also worth reading are this paper by Elizabeth Samson and this article by Professor Eugene Kontorovich and Paula Kweskin.

“The recent UN Security Council resolution authorizing force against Libya provides an excellent experiment in whether the legal arguments widely made about Israel are also applied in parallel cases.” 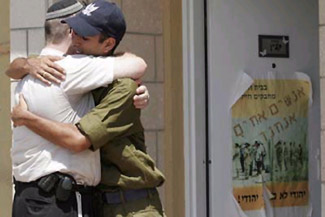 2005 do not necessarily put an end to acts of terror against Israeli civilians and that ‘international opinion’ has depressingly little to say about the right of Israelis to live in security.

Whether the BBC is aware of it or not, the notion that uprooting thousands of Israelis from their homes and livelihoods also does not bring an end to the slur of ‘occupation’ – at least according to media-defined and promoted ‘international opinion’ – makes it even more difficult to argue the case for similar future concessions.

With Israelis about to go to the polls in three weeks’ time, we can no doubt anticipate a flurry of BBC articles on the subject of political trends within the Israeli electorate, many of which will probably be liberally seasoned – ironically – with phrases such as ‘shift to the right’.

Like Loading...
Tags from the story
BBC, BBC News, BBC Online, Gaza Strip, Hamas, Israel, Uncategorized
Written By
Hadar Sela
More from Hadar Sela
If ever there was an example of the patience and tenacity required...
Read More