The BBC News website includes a section entitled “Special Reports” which has been carrying a feature called “Middle East crisis” since the latter stages of Operation ‘Pillar of Cloud’ well over a month ago. We have previously discussed the item entitled “Israel-Gaza violence in maps” shown below on the right hand side.

Following the “Middle East crisis” link leads to a webpage featuring many of the BBC’s reports from the time of the recent conflict. It also includes an item entitled “Life in the Gaza Strip“, dated November 22nd and opening with the words:

“After eight days of conflict between Israel and the Hamas movement in Gaza in which five Israelis and over 150 Palestinians died, a ceasefire is taking hold and some semblance of normal life is returning.

We take a look at life in the Gaza Strip, one of the most densely populated and volatile regions in the world.”

Needless to say, there is no concurrent item entitled “Life in southern Israel” on that same page.

“Home to 1.6 million people, Gaza is just 40km (25 miles) long and 10km wide, an enclave bounded by the Mediterranean Sea, Israel and Egypt.

Originally administered by Egypt which retains control of Gaza’s southern border, the area was captured by the Israelis in 1967 during the Six Day War.”

The use of the word “originally” indicates a rather curious editorial decision to begin relating the history of the Gaza Strip after it was conquered by Egypt during the War of Independence and of course erases the fact that the Strip was originally part of Mandate Palestine and that Jews had lived there both in ancient times and before the Egyptian conquest in 1948.

The article continues with a sanitized version of the manner in which Hamas came to control the Gaza Strip:

The lack of any mention of terrorist activities and rocket fire against Israeli civilians originating in the Gaza Strip – and of course the built-in BBC inability to describe Hamas as a terror organization – means that the next sentence is context-free.

“The Israelis swiftly tightened a blockade on Gaza, restricting the transit of goods and people into and out of the territory.”

The article then goes on to discuss the economy of the Gaza Strip, stating:

“With Israel’s blockade choking off opportunities to trade with the outside world, Gaza is largely dependent on external aid and the shadow ‘tunnel’ economy.”

According to the CIA World Factbook, the Gaza Strip actually exported goods at a higher value than the PA-controlled territories in 2009, with most of its exports being strawberries, flowers and vegetables.  No mention is made of the not infrequent terrorist attacks on the crossings in and out of the Gaza Strip through which exports pass.

The fact that modifications have been made to both the fishing zone (which was doubled in size) and access to agricultural land near the border fence between the Strip and Israel under the terms of the recent ceasefire, remains unreported in this article.

“Farming has an important but limited role due to lack of access to water and the buffer zones imposed by Israel along the border.

Fishing for Gaza’s 3,000 fishermen is also restricted. Ten years ago, they could fish out to 12 nautical miles from the coast. That is now limited to three nautical miles.”

In the section entitled “Population”, the article uses the familiar theme of Gaza as one of the most densely populated areas in the world.

“Gaza’s population is expected to grow from the current 1.64 million to 2.13 million by the end of the decade.

This will also result in an increase in the population density which is already one of the highest in the world. On average, some 4,505 people live on every square kilometre in Gaza. That’s expected to rise to 5,835 people per square kilometre by 2020.”

The section of the article relating to “Food and Health” quotes a BBC employee in the Gaza Strip who states that:

“The crossings are closed. People need to survive. We depend economically for our daily basic needs to survive on Israeli goods. Right now the crossing is closed. There is no milk, no yoghurt, no flour to make bread. There is nothing in the market.”

Whether or not that statement was made whilst the conflict was ongoing is not made clear, but it certainly does not reflect the usual situation and once again no connection is made between the closing of crossings and the activities of terror groups operating in the Gaza Strip. Throughout Operation ‘Pillar of Cloud’, foodstuffs and other goods continued to enter the Strip whenever possible.

Under the heading “Power”, the article states that:

“Power cuts are an every day occurrence in Gaza. It gets most of its power from Israel together with further contributions from Gaza’s only power plant and a small amount from Egypt. However, this is less than its current needs which have been growing at a rate of 10% a year.”

The report fails to mention, however, that at the beginning of 2011 Hamas elected to discontinue the purchase of fuel from Israel for Gaza’s power plant, instead relying on an erratic supply via the smuggling tunnels which resulted in an exacerbation of the power crisis in the Gaza Strip and much infighting.

Similarly, the article’s section on “Water and Sanitation” makes no mention, for example, of the fact that sewage pipes in the Gaza Strip were used to make Kassam rockets and that new supplies of pipes transported in by Israel were diverted for the same usage rather than being used to solve the Gaza Strip’s sanitation problems. 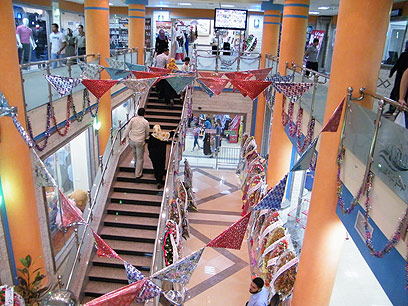 The article finishes off with a section on leisure which opens with the sentence:

“As one might imagine, there is little in the way of entertainment in Gaza.”

Admittedly, an Iranian film festival entitled “The Days of Resistance Cinema” might not be everyone’s idea of a good night out, and Hamas banned the sale of alcohol in 2007, prohibited women from smoking the ‘nargila’ in public in 2010 and burned down the water park, but there are still the shopping mall, the riding club and some restaurants.

It must have taken some pretty impressive contortions on the part of the BBC Online writers to produce this feature without even once attributing any responsibility whatsoever to the Gaza Strip’s terrorist rulers (who barely get a mention) for the situation in which the general population finds itself.

The sad thing is that the BBC’s refusal to recognise and document Hamas’ responsibility for the deterioration of conditions in the Gaza Strip – brought about by its putting continued terrorism against Israeli civilians at a higher level of priority than taking care of the population’s welfare – harms Palestinians first and foremost.