Continuing its ‘building materials for Gaza’ theme from the previous day, the BBC News website published an article on December 31st entitled “Israel lifts ban on gravel imports into Gaza” in its Middle East section.

The headline obviously implies that there was a ban on the import of gravel into the Gaza Strip from 2007 until the end of December 2012. The caption to the accompanying picture tells a slightly different story, stating that “Imports of gravel from Israel had been largely banned since 2007″. [emphasis added]

The article goes on to say:

“Israel has eased restrictions on allowing building materials into the Gaza Strip, imposed when Hamas came to power there in 2007.

Shipments of gravel for private use are now being let in because a truce with militants in Gaza which ended last month’s conflict has held, Israel says.

Israel previously banned most construction materials, fearing they could be used against it by militants.” [emphasis added]

As we have discussed here before, the restrictions upon the entry of building materials into the Gaza Strip relate to dual-purpose materials not intended for a specific PA approved project overseen by international bodies – as explained by COGAT back in 2010:

“The only goods that are currently restricted are arms, weapons and various war materials, and certain items that have military as well as civilian applications. Because of the problematic nature of these dual-use materials, construction materials are currently allowed in only for PA-approved projects that are under the supervision of international bodies.”

Despite the BBC’s dramatic claim that “Israel previously banned most construction materials”, the United Nations’ Office for the Coordination of Humanitarian Affairs reports that between June 2010 and December 2012, 40,041 truckloads of construction materials entered the Gaza Strip from Israel.

But what about that banned gravel in the headline? Well, gravel is classed as a type of construction aggregate and looking at the COGAT reports for just the last quarter of 2012, we see that no fewer than 4,366 truckloads of aggregates entered the Gaza Strip from Israel between September 30th and December 22nd 2012.

Can the phrase “largely banned” really be said to be an accurate representation of the entry of 4,366 truckloads of aggregates into the Gaza Strip in under three months, during which rocket fire caused the closure of crossings on several occasions?

Further on in the article, we come across the word “largely” yet again:

“Israel still largely bars imports and exports from the territory.”

Those same COGAT weekly reports indicate that in the same quarter, two hundred and forty two truckloads of exports left the Gaza Strip by way of the crossings into Israel, including 98.06 tons of strawberries and 432,110 flowers since the beginning of December alone. Other exports during that period have included 57 tons of biscuits, six truckloads of dates, over 8 tons of spices and furniture.

As for imports, it has actually been Hamas which restricted the entry of imported fruit into the Gaza Strip in recent months.

Thus once again the question arises as to whether it really is accurate to describe exports as being “largely” barred, especially when COGAT’s spokesperson says:

“I know of no request to export agriculture products from Gaza that has been refused,” said Guy Inbar, spokesman for the division in Israel’s Defense Ministry which liaises with the Palestinian territories.

From thereon, however, the article takes a sinister turn:

“It [Israel] also maintains a naval blockade and controls Gaza’s air space, which it says is necessary for Israel’s security.”

No mention of the tens of thousands of rockets fired at Israeli civilians or the terror attacks originating in the Gaza Strip. No mention of weapons smuggling from Iran and Libya. Just the ambiguous ‘nudge nudge’ phrase – “it [Israel] says”.

And then we have the following:

“Human rights groups have said Israel’s measures are tantamount to collective punishment against Palestinians in Gaza.”

The anonymous writer of this piece presumably thinks that he or she has the BBC’s back covered here. After all, this is not a direct accusation of war crimes coming from the BBC, but ‘merely’ the reporting of hearsay from some equally anonymous ‘human rights groups’.

Unfortunately, the vast majority of BBC audience members reading this article will have no idea about the misuse of the ‘human rights’ halo by many an anti-Israel politically motivated NGO. They will presume that any organization carrying the label ‘human rights’ is both impartial and respectable in its intentions.

They will not be aware that among those groups engaging in the delegitimisation of Israel by accusing it of ‘collective punishment’ are organisations such as ‘Human Rights Watch‘ which only recently had to remove from its ranks a man condemned by the British Prime Minister, among others, for spreading 9/11 conspiracy theories and making antisemitic remarks. 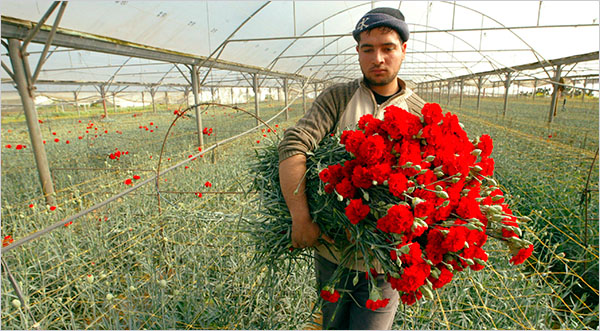 Neither will they be aware of the use of the apartheid trope by another promoter of the ‘collective punishment’ theme – Gisha  – or of Oxfam’s support for the one-state solution-supporting  Boycott, Divestment and Sanctions movement which – ironically – is more than willing to sacrifice the livelihoods of farmers in the Gaza Strip who chose to export their produce via Israeli companies – just as long as it contributes to the delegitimisation of Israel.

The BBC, however, should be aware of such factors because it has an obligation to check contributors – and also presumably those it decides to quote – for bias. The fact that in this article a BBC writer repeats and propagates a politically motivated unfounded and unproven allegation of a very serious nature without the slightest bit of evidence is indication of a very grave impartiality failure indeed.

Oddly, tucked away down towards the bottom of this article we find these two sentences:

“Prior to the latest easing of restrictions, Israel had allowed in construction materials for aid agency projects.”

“Israel had banned most construction materials to prevent them being used by militants to make fortifications and weapons.”

So the BBC does know after all that construction materials have been entering the Gaza Strip on a regular basis, and although the phrasing is wrong in that the entry of dual-use materials was restricted rather than “most construction materials” being “banned”, it obviously also understands why the restrictions were necessary. Why then was that information not presented properly at the top of the article instead of the sensational opening which misleads and misinforms readers?