On December 30th, I noted that the Guardian’s media blogger, Roy Greenslade, was ignoring recently announced Hamas restrictions on journalists – a widely disseminated story which, among others, the Guardian’s Harriet Sherwood reported on December 27th, (Hamas bans Palestinian journalists from Israeli media co-operation ). 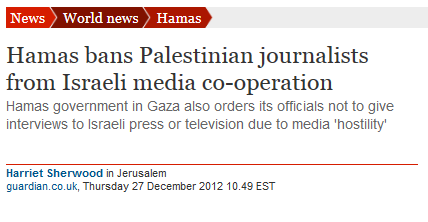 While one can excuse Greenslade for not reading this report in other media, surely he should have noticed Sherwood’s story in the very same paper he writes for, no?

But alert media blogger Greenslade, a fierce defender of freedom of the press, somehow missed this assault on press freedom in Gaza.

He always seems eager to rewrite reports on real or imagined problems he uncovers dealing with the issue of freedom of the press and freedom of expression in Israel – so why not in Gaza?

For example, his re-write of an article from Ha’aretz on September 4th, 2012: 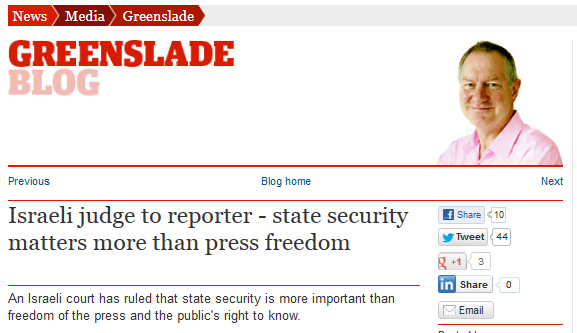 Another example: In July 2011 we had this article from Greenslade, rewriting an article from the NYT, darkly warning of the end of a free speech in Israel (note, by the way, that the Supreme Court just overruled an attempt to ban Arab MK Zoabi who actually participated in treasonous acts against Israel! – try that in the US or UK!):

Well, I am pleased to note that Greenslade must “follow” us here at CiF Watch, as he has corrected this oversight.

On January 1, shortly after the CiF Watch article appeared, Greenslade unearthed, according to his footnote, an article by Reporters Without Borders published on December 28th, and also Sherwood’s article.

So, better late than never.

However, rather than giving credit where credit is due (to us!) he  corrected his oversight by (re) writing a brief article about Hamas’ banning of Palestinian journalists which he footnoted thus: “Sources: The Guardian/RSF“:

But in fairness to CiF Watch, given that Greenslade has “outed” the Guardian’s favorite terrorist group thanks to our efforts to prod him along a little, should he not have written:

Or, would we then have seen him banned by the Guardian, like so many others, and have seen an article by their new media blogger appearing in the Guardian’s media section – like this?