When the Israeli government announced zoning plans for the area east of Jerusalem known as E1 in late November, the world – and the BBC – was aghast. A plethora of BBC reports informed audiences that: [all emphasis added] 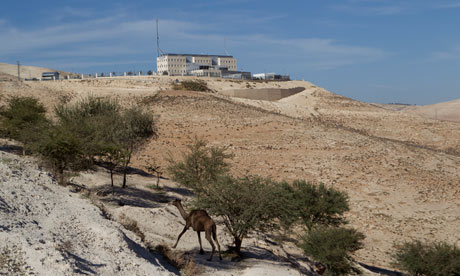 “The US said the expansion plan was counterproductive and would make it harder to resume peace talks.”

“Palestinian President Mahmoud Abbas called for an end to settlement building and a return to peace talks.”

“It is an act of Israeli aggression against a state, and the world needs to take up its responsibilities,” senior Palestinian official Hanan Ashrawi told the AFP news agency.”

“Secretary of State Hillary Clinton said that “these activities set back the cause of a negotiated peace”.

The White House had earlier described the proposal as “counter-productive”.”

“UK Foreign Secretary William Hague said he was “extremely concerned” at the move, adding that the UK “strongly advises the Israeli government to reverse this decision”.”

“In a statement on Sunday, Mr Ban expressed “grave concern and disappointment” over the 3,000 newly authorised Israeli settlement units in East Jerusalem and the West Bank.

But he was most adamant that any plans to build in the so-called E1 area – between Jerusalem and the West Bank settlement of Maaleh Adumim – should be rescinded.

“It would represent an almost fatal blow to remaining chances of securing a two-state solution,” Mr Ban said.”

“On Monday, the UK summoned the Israeli envoy to express its concerns.

The UK Foreign Office said Israel should expect a “strong reaction” if it went ahead with its plans.”

“The UK said it was urging Israel to reconsider the settlements plan, saying it “threatens the two state solution and makes progress through negotiations harder to achieve”.”

“The US said earlier the expansion plan was counter-productive and would make it harder to resume peace talks, and EU foreign policy chief Catherine Ashton said she was “extremely worried” by prospects of large-scale construction.”

“Britain and France have both summoned Israeli ambassadors in protest at Israel’s decision to approve the construction of 3,000 new homes in the West Bank and East Jerusalem.

The UK said the move would cast doubt on Israel’s “stated commitment to achieving peace with the Palestinians”.”

“The UN has warned the homes would be “an almost fatal blow” to peace hopes.

In a statement, the UK Foreign Office said it was urging Israel to reconsider, and threatened a “strong reaction” if the homes went ahead.

It said: “We deplore the recent Israeli government decision to build 3,000 new housing units and unfreeze development in the E1 block. This threatens the viability of the two state solution.”

“It would represent an almost fatal blow to remaining chances of securing a two-state solution,” Mr Ban said.”

“German government spokesman Steffen Seibert said in Berlin: “Israel is undermining faith in its willingness to negotiate and the geographic space for a future Palestinian state, which must be the basis for a two-state solution, is disappearing.”

The Russian foreign ministry website said the move would have “a most adverse impact” on peace.”

And, from the BBC’s diplomatic correspondent:

“The summoning of Israeli ambassadors to the foreign ministries in London, Paris and Stockholm may be only the opening phase in the diplomatic crisis prompted by Israel’s decision to build some 3,000 housing units in East Jerusalem and the West Bank, as well as plans to push ahead with construction between Jerusalem and the settlement town of Maale Adumim.”

Later in December, the BBC returned to the subject once again:

“The US protects Israel at the UN but the state department accused Israel of “a pattern of provocative action”.

“The four European members of the UN Security Council – France, Germany, the UK and Portugal – issued a statement saying they were “extremely concerned” by Israel’s intentions to build more settlements.”

“Israel’s announcements “send a negative message and are undermining faith in its willingness to negotiate,” it warned.”

As we see, the BBC – in no fewer than six separate articles on its website (not to mention its television and radio reports) was doggedly intent upon getting the message across to its audiences that decisions by Israeli planning committees and a few lines drawn on maps were ruining the last chances for peace.

On January 11th 2013, a considerably more tangible action than planning protocols and architects’ sketches was initiated by some 200 members of Palestinian political groups who, together with foreign anti-Israel campaigners, set up a land-grab tent camp in the area known as E1.

“Its creation was lauded by Palestinian leaders, including Palestinian Prime Minister Salam Fayyad.

Palestinian leaders, including Mustafa Barghouti, member of the Palestinian Legislative Council, visited the campers in the morning. Palestinian negotiator Saeb Erakat told AFP that the Israeli army stopped him from arriving at the outpost.”

“Leading activist Salah al-Khawaja said that the group is determined to stay on the land. “This is Palestinian land, it is our right to build our villages on our land whenever we like. We will not accept displacement and we will stay,” he said.”

The BBC has produced one article on the subject so far. Needless to say, according to that report the Palestinian Authority-approved action does not appear to be a provocation, does not apparently endanger peace, make it harder to resume peace talks or deliver anything approaching “a fatal blow” to the two state solution. In contrast with its usual practice when reporting on Israeli planning decisions, in this case the BBC refrains from presuming expertise on the outpost’s legality under ‘international law’.

Update: the campers at the outpost (around 10% of whom were journalists) were evacuated by Israeli security forces early on Sunday morning. The BBC’s report on the subject – still promoting the erroneous Palestinian claim that development of E1 would “threaten the viability of a future Palestinian state” – is here.